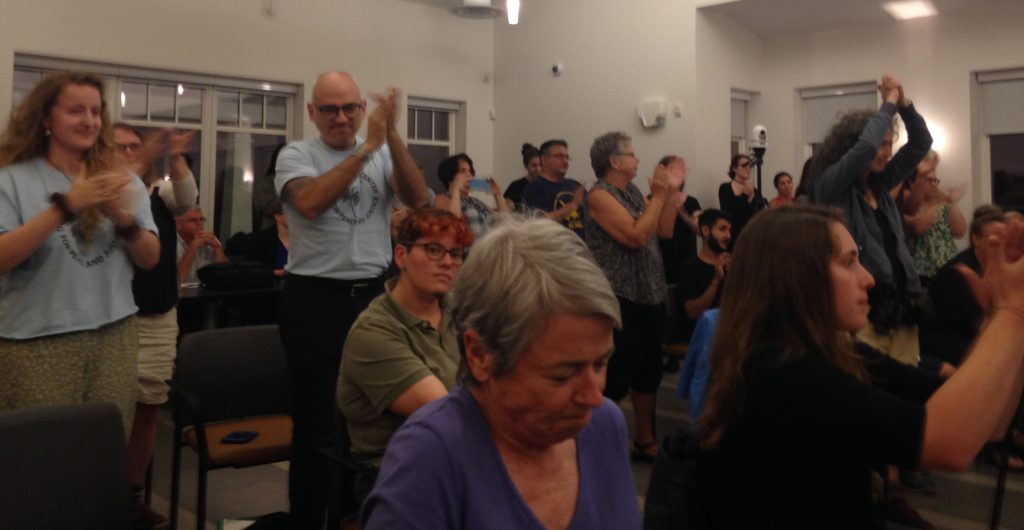 The Greenfield City Council adopted a new “Safe City” ordinance on Wednesday night in a 10-3 vote, reversing its stance on a similar ordinance in 2017, which failed in a 6-4 vote.

Effective as of its passage, the ordinance prohibits Greenfield officials, including law enforcement, from inquiring as to or taking law enforcement action based on an individual’s actual or perceived immigration status. City officials are also now prohibited from responding to Immigration and Customs Enforcement (ICE) requests for information on incarcerated individuals or delaying an individual’s release on the basis of an ICE administrative warrant. City officials will still honor ICE judicial warrants. City officials will not target local institutions that provide refuge to immigrants with legal action.

The ordinance was adopted at a City Council Meeting that took place at the John Zon Community Center. Councilors Mark Berson, Timothy Dolan, Sheila Gilmour, Norman Hirschfeld, Douglas Mayo, Penny Ricketts, Ashli Stempel, Vern Sund, Otis Wheeler, and President Karen “Rudy” Renaud (who proposed the ordinance) voted in favor. Councilors Isaac Mass, Brickett Allis, and Wanda Pyfrom voted no. The council makeup was different from when the vote failed two years ago, as several progressive candidates ran on a platform of passing the Safe City ordinance after it failed, and most of those elected in 2017 supported it.

“This is more than just a legal or illegal immigrant situation. This talks about who we are as a community,” Sonia Lindop of Greenfield told the City Council during the public comment period. Originally from Peru, Lindhop said she has had an overwhelmingly positive experience living in Greenfield for the past 25 years but still felt that the measure sent an important message. “As a brown person walking the street… an ordinance like this ensures that for us, who are somehow different, we can walk in the streets of Greenfield in a safe way.”

Greenfield resident Stephanie Duclos, however, expressed concern that the measure could have serious consequences. “I don’t think the public is educated at what we’re at risk to be losing if we’re designated a ‘safe city,’” she told the Council. Duclos pointed out that the Trump administration has threatened to withhold funding from cities that adopt policies that limit cooperation with federal immigration enforcement. “Are we willing as a town to put our neck out on the line? To jeopardize that funding that helps our police department, helps our correctional facilities, helps women who are victims here within the United States of domestic violence?”

Several members of the Council shared the concerns of Duclos and other community members who spoke out against the ordinance. Councilors Pyfrom and Allis of precincts 4 and 3, both of whom voted against adopting the ordinance, pointed to statements from the Chief of Police that it is the department’s policy not to ask an individual’s immigration status. “We are not doing the things that would make us an ‘unsafe city,’” Councilor Allis said. “I believe this might have unintended consequences where it would give people a false sense of security.”

Councilor Pyfrom suggested that the ‘safe city’ label could even make Greenfield a target for immigration enforcement. “To me it’s just a red flag to put someone who was already safe in harm’s way.”

Many speakers from the community, however, viewed the ordinance as an opportunity for the city to formally voice its condemnation of federal immigration enforcement policies. “Two years ago when Greenfield first considered becoming a safe city, our nation’s political climate was quickly becoming hateful, volatile, and for some of our neighbors, dangerous,” said Reverend Heather Blais during public comment. “Some of our nation’s elected officials have continued their fear mongering and hate speech to continue to attack immigrants, refugees, and asylum seekers… This is the moment for our community to stand together to ensure that all people within the boundaries of our city know that they are welcomed, safe, and have the basic rights to report a crime without fear of deportation.”

Many councilors agreed with the conviction that the ordinance was an important statement for the city to make. “This is not just an ordinance,” said Councilor Berson. “This is a declaration of humanity.” This is Greenfield’s opportunity, Berson suggested, to show to the federal government “that we are not going to tolerate this kind of injustice, this kind of inhumanity, and, frankly, this kind of silent murder.”

The moment the ordinance passed, the audience at the John Zon Community Center erupted into applause. As the meeting entered a recess, former Councilor Maria Burge told the Advocate, “I’m happy for everyone feeling safe and having an inclusive community.” Burge, who failed in her bid to be elected to an at-large seat to the Council in 2017, was a deciding vote against the ordinance’s passage during that year. She did not endorse one side or the other this time around.

Burge expressed what she perceived as the limits of the ordinance following the vote. She regularly works with undocumented community members and “all they talk about is being scared,” she said. “They’re just waiting for ICE to pop in. I can’t honestly tell them tomorrow, ‘come to Greenfield and you’ll be safe.’ Because if ICE comes, we can’t stop them.”