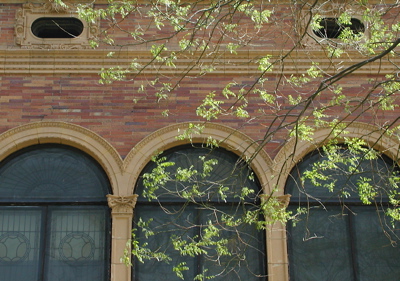 Big news broke today about a series of milestone agreements reached between the city and the Springfield Library and Museums Association. A total of four contracts were signed in front of the press during a mid-day announcement in the Museum of Fine Arts gallery upstairs currently exhibiting quilts. 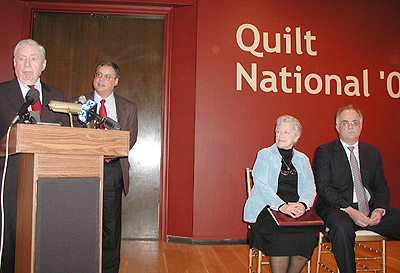 Both Mayor Charles Ryan and SLMA president Joseph Carvalho spoke; I’ll have their words for you a bit later. 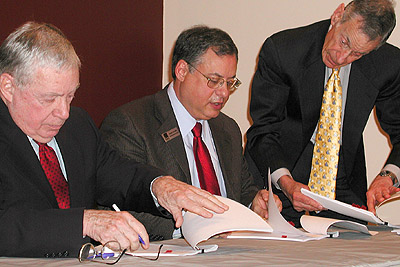 The signed documents include a memorandum of understanding, a museum services agreement, a branch library lease, and a central library lease. Thankfully the city provided those present with a cheat sheet to understand what these all essentially mean, but I also got a hold of copies of each of the contracts, with special thanks to Barbara Garvey.

Mason Square branch library. In 2003, the SLMA sold the branch to the Urban League for $700,000. Of that amount, $600,000 is being returned to the Annie Curran Endowment Fund, and $100,000 went to the SLMA’s Plant Fund. The document lays out the agreement between the parties: the city dismissed its lawsuit contesting the SLMA’s right to sell the branch, and the SLMA is contributing one-third of the cost of construction or rehab for a new one, or $333,334. (A steering committee is currently engaged in working on this issue.)

Library endowment and trust funds. Certain endowment and trust funds are acknowledged as belonging to the Springfield Library Foundation, formed in 2005. The Curran Fund is one of these, total value at the end of 2006 being $4,617,494. An additional $360,526 in endowments, and $3,395,735 in trusts, is included in this category, for a grand total of $8,373,755. Two smaller endowments are agreed upon as belonging to the SLMA, a total of $33,942. Another two million dollars’ worth of endowments and trusts are still in "friendly dispute." 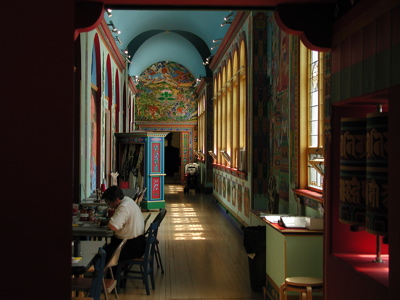 Museum services. The museums will provide free admission to Springfield residents as of May 1, except for special exhibits. A "museum access card" will be available for those offering proof of residency. The city will pay $1.3 million annually—a "museum services fee"—to the SLMA for 25 years, although for fiscal year 2007, that amount will be $1.1 million as it has been since 2003. The museum services fee will also provide for the potential transfer to the city of the SLMA’s branch libraries and their contents, as well as the furnishings, fixtures and circulating book collections in the central library. The 25-year agreement goes forward, as I understand it, as Special Act Legislation, which means it must be approved by the City Council and then goes to the state legislature for approval. A minimum three-year agreement was signed prior to the 25-year agreement gaining approval.

Central library. For one dollar a year, the city will lease from the SLMA the central library for 25 years or until the library is no longer located in the building, whichever comes first. The SLMA’s telephone system and equipment access on the upper first floor are excluded from the lease. In 2032 there will be options to renew the lease in five-year terms. The SLMA will provide heat and the city will reimburse the SLMA for its share, as well as for exterior repair. The city will pay for interior repair and maintenance. Interior alterations will have to be agreed upon by both the SLMA and the Library Commission. As with the branch library lease agreement, this one is for three years, rolling over until Special Act Legislation is passed.

Rare books. Certain books have been claimed by the SLMA as its property, including art and historical collections (I have a list if anyone wants specifics). These will not be sold. Proceeds from other rare books for sale by the SLMA, for example at a 2005 Christie’s auction and a 2006 Knotty Pine auction, as well as sales that have been contracted for with Knotty Pine but have not been held yet, will be shared equally between the city and the SLMA. The SLMA will also "provide the city with periodic accountings of each sale of rare books."

SLMA Board of Directors. The SLMA agrees that at least a quarter of its board and executive committee will be comprised of Springfield residents. The mayor can nominate two people, as well as two alternates, to serve a three-year term or until the mayor’s own term ends. Such people "shall be neither a city of Springfield nor SLMA employee." The SLMA reserves the right to reject two such nominees. The chosen nominees will be elected to the board at the SLMA’s annual September meeting.

This is a lot to take in, but it looks like very good news to me. 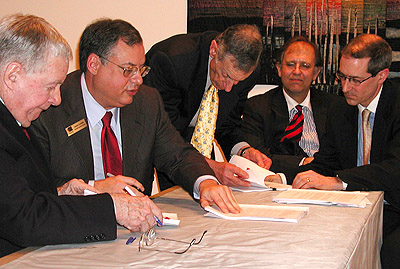