Countering the Orchestra of Orthodoxies: A UMass Amherst Fulbright Scholar Returns from Qatar 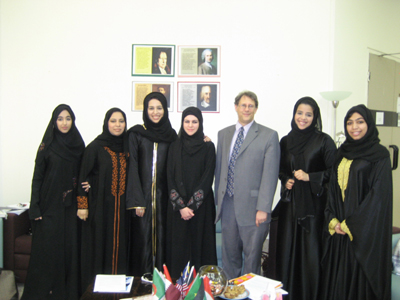 How has the US-led overthrow of Iraq’s former government and ongoing military presence changed American and Middle Eastern societies? Several broad answers are obvious. The 2003 war led Iraqis to more personal and political freedoms. Yet this came alongside widespread death, violence, and insecurity, bringing back the relevance of philosophers like Thomas Hobbes, who prioritize the need for political order over rights and democracy. Iraq’s Hobbesian moment also helps rationalize how the post-2001 context has given new life to several unpopular Arab authoritarian regimes and facilitated the growth of disciplined militias whose appeal lies in a straightforward message that glorifies faith-based opposition to American influence in the Middle East.

In the US, the war has led to the direct or indirect pain of loss, confusion and post-traumatic adjustment as young soldiers return dead or damaged from Iraq. Also on the home front, growing worries about Washington’s ability to remake Iraq have precipitated wider doubts about our government and what it can accomplish in the world, as well as decreasing our capacity to deal with other foreign policy challenges, such as mounting Palestinian civil war or Iran’s emboldened role in the Middle East. In short, at least for now, the war in Iraq has made the US and the Middle East less stable and secure.

Yet, related to the mission of this blog, I want to highlight a less obvious result of the 2003 war; it has increased both the impediments to and the importance of reflective, open-minded discussion within and across the US and the Middle East. Such discussion is, of course, one of the greatest goals and gifts of the humanities. Yet the post-9/11 threat of terrorism has been used to justify government clampdowns on dissent and dialogue, in somewhat similar ways in the US and the Middle East. After 9/11, our sense of vulnerability as a nation has eased the way for government claims of what is needed in our national interest to trump reasoned arguments, evidence and tolerance for intellectual difference. Many of us who were outraged by the 9/11 attacks and concerned about Middle Eastern democracy found our views on what we saw as common-sense questions about whether a mostly American occupation of a diverse Arab society could bring liberal politics or stability to Iraq distorted and critiqued. In the Middle East, even more draconian measures to silence open political discussion have occurred, such as Egypt’s crackdown on political bloggers. Whether through public pressure, police action or both, government efforts to limit open debate in the name of national unity during a crisis are easy to understand. Yet recent experience should lead us to ask loudly — can such efforts truly work to streamline effective policy or meet most citizens’ needs?

A professor steeped in liberal-arts teaching like myself is generally prone to answer “no.” One of the reasons that governments or pro-government media outlets attack academia is not that we push biased viewpoints or wield unfair Svengali-like influence over our students. Rather, most of us genuinely want students to make up their own minds and learn multi-faceted reflection about significant issues and ideas in their lives. I believe one lesson of American and Middle Eastern political problems in recent years is that closing off dialogue with very different points of view only exacerbates international problems and domestic threats to security and stability. When we allow structural or intellectual barriers to a wide range of perspectives, we are likely to be less sensitive to others’ objections to our fighting faiths, whether these are the spread of Western forms of democracy or a particular vision of Islam. That reflective debate matters and sometimes needs defense explains the power and influence of John Stuart Mill’s famous On Liberty.

Americans and Middle Easterners need dialogue and debate to help overcome the gulfs that have increased contemporary conflict and insecurity; there are hopeful signs that such dialogue is not only possible, but ongoing. On the Middle Eastern side, my recent experience as the first Fulbright Scholar professor to teach a liberal arts course on political philosophy in the tiny Arab country of Qatar provided many opportunities to observe open debate and inquiry on critical issues throughout the Persian Gulf. Examples of this in which I participated personally, include:

Similarly, in addition to the ways that free debate and education remain embedded in American law and practice, despite contemporary pressures, some specific post-9/11, post-Iraq war developments that I have found heartening in the US include:

When smart analysts like Samuel Huntington opine that the contemporary world is a clash of civilizations with the “West against the rest,” their sweeping sense is best countered by specific encounters with the ideas of diverse people from within these faceless entities. People like me, who have had the fortune to build a career around such encounters, understand that overgeneralizing differences between one “civilization” and another is not merely dangerous, but bereft of the fun of learning and teaching inherent in these encounters. Despite the apparently broad differences that separate the post-9/11, post-Iraq war US and Middle East, we are not experiencing a clash of civilizations. Rather, we are living through an orchestra of orthodoxies, loud noises with strong institutional supports trumpeting essential difference that can drown out quieter, individual voices of tolerance and dialogue. Rather than working together to produce beautiful harmony, such a directionless body turns potentially interesting debates into frightening cacophony. It is the challenge and chance for the humanities, and the liberal arts discourse of open-minded reflection that they champion, to counter this orchestra of orthodoxies with a steady chorus of collegiality and cosmopolitan community-building.