The Law of Unintended Consequences: A Tale of Two Afghanistans

One never knows what to expect when flying into Kabul International Airport and making one’s way into the bustling capital of the Islamic Republic of Afghanistan. On my first trip to Afghanistan in 2003 I found the city streets filled with bandolier swathed Northern Alliance fighters, the lamp posts decorated with the ribbons of cassette and video tapes that had been symbolically ‘executed’ by the Taliban moral police, and more burqas than a Taliban ‘Promotion of Virtue and Prevention of Vice’ policeman could shake an iron rod at.

As I walked Kabul’s streets with a ten-year-old ‘shadow’ who offered to be my bodyguard, however, I notice some tentative signs of progress in ridding this town of its brutal past. Barber shops had sprung up everywhere (the Taliban had enforced ‘Muhammad-length’ beards), internet cafes had begun to appear, and one could see the occasional beauty shop (or ‘house of harlots’ as they’d been known under the Taliban). I even found one hotel run by an Afghan-American from New Jersey with a Hoboken accent that served a passable pint of beer.

But that was not all. Making my way north out of Kabul and over the towering Hindu Kush mountains to the town of Mazar i Sharif I found a Northern Alliance general named Dostum who refused to release his 3,000 Taliban prisoners of war. Allowing me rare access to his prisoners who were kept in a Medieval fortress prison, he told me to give a message to the American president. “Tell him not to make me release them. The (Afghan President) Karzai has told me to set my prisoners free. But if I do they’ll be up to their old mischief. Better to keep them here so they don’t wage jihad.”

Hearing the Taliban prisoners’ sad stories of being in the wrong jihad-place at the wrong war-on-terror-time I could not, however, help but feel sorry for them. The days of the Taliban were over after all. Democracy was triumphant in Afghanistan and Bin Laden’s legions of ‘evil-doers’ were being ‘smoked out of their caves’ across the globe from the southern Basilan Island in the Philippines to the Pankisi Gorge in Georgia’s Caucasus Mountains.

In 2005 I returned to Kabul and found that the gun-toting Northern Alliance troops were gone. In their place I found hundreds of Afghan National Police wearing crisp new uniforms. They were mostly trying to control the mass of newly purchased Toyota Corollas that had come to fill the already swarming streets of the capital. Walking through the clouds of car fumes and camel dust I also noticed countless ‘Roshan’ cell phones in the hands of Kabulis. But nothing could prepare me for the sight I encountered right down the street from the former Ministry for the Promotion of Virtue and the Prevention of Vice. There, in all its glory stood a newly built Afghan Fried Chicken restaurant. 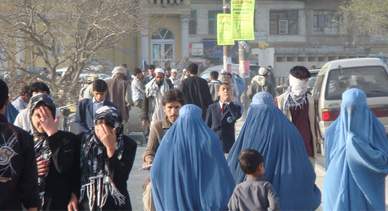 And that was not all. I could not help staring at ‘naked’ women shyly venturing out without burqas on for the first time in years, video stores stocked with boot-legged American movies, and photography and cell phone stores on every corner. Clearly technology was marching hand in hand with democracy in Afghanistan to expunge the very memory of the Taliban technophobes.

Later I photographed a passing bus filled with turbaned villagers with the words “Give the Love” painted on the side in English. Elections shmalections! What more proof did one need that the War on Terror had been successful in this country than Afghans ‘giving the love’ and talking on their cell-phones as they dined on AFC?

But for all the pride I as an American felt in my country’s remarkable success in bringing fried chicken, cell phones, DVDs and the internet to Afghanistan, there were several clouds on the horizon that threatened to rain on the picnic. As I haggled for carpets on Kabul’s famous Chicken Street I was told that some foreigners had recently been blown up on this very street by a suicide bomber. I soon collected similar stories of random bombings by ‘dead-enders’ in other parts of the capital. Hearing the accounts of occasional girls’ school burnings in the Pashtun south (the Taliban are ethnic Pashtuns) I tried to pass them and the bombings off as sour grapes.

But Afghans were nonetheless concerned, including Dostum the ‘Taliban Slayer.’ I made a journey north to the Northern Alliance general’s base and was surprised to find myself driving on a beautiful ribbon of newly laid asphalt that made the pot-holed roads of Boston seem like so many Third World donkey paths. Clearly the occasional suicide bomber could not compete with such tangible signs of progress, I told myself.

“The bombers are undermining everything the Coalition is trying to do here, from road-laying to hearts and minds campaigns.” Dostum warned after I commented on the road and his newly emptied prison. “Suicide is alien to our culture. The Taliban, including those whom I was forced to release so they can reorganize, are learning it from someone. Neither the anti-Soviet mujahideen fighters nor the Taliban ever resorted to blowing themselves up!”

Assuring Dostum that the ‘die hards’ would never wreck the inevitable progress in Afghanistan I promised to return in two years to see if the Taliban had given up their jihad and taken to eating at Afghan Fried Chicken.

For all my optimism, by 2006 things had taken a terrible turn for the worse in Afghanistan. What had started out as a timid series of no more than twenty suicide bombings the previous year had devolved into a full fledged terror campaign. While I tried keeping track of the specifics of each and every bombing as part of my research, I lost count after one hundred.

By year’s end the number of suicide bombings in the Afghanistan conflict, the so-called Forgotten War, had soared to a sickening 139, ranking it second only to Iraq in. This from a country that had not seen one suicide bombing against the Soviets during ten years of brutal occupation. Clearly something terrible was happening in Afghanistan, and I traveled there in April to see if I could understand this process of radicalization.

As I was driven from the airport, I put aside my fears of bombers and began to relax a little, for it was not hard to notice the increasing signs of positive change in the country. There were more women on the streets without burqas than ever before, more Corollas, more ‘Roshan’ cell phones, and even a few newly constructed steel and glass ‘sky-scrappers’ in downtown Kabul.

But my driver did not consider such positive signs of change to be as noteworthy as the numerous sites of suicide bombings that we passed on the way into town. Convinced that a pint at my Hoboken friend’s hotel would calm my fears, I dropped by his bar to say hello. I was told that he had recently been killed by the Taliban for serving alcohol and allowing his hotel to become a ‘den of infidel iniquity.’

His death troubled me as much as the blast marks on the road where humans who were trying to rebuild their lives after twenty five years of war had been incinerated by suicide bombers. For in some ways the brash Afghan from New Jersey had personified the ‘inevitable’ progress that I had envisioned for his country.

But for all its sad symbolism, I quickly found that his death was only the tip of the iceberg. It became apparent that there were two stories to Afghanistan. One was of progress in the center and north of the country that I had noticed on my previous trips. The other was provinces being lost to the resurgent Taliban in the Pashtun south. While I had come to think of the ribbons of asphalt the Coalition were laying across the country as conveyor belts of freedom, I was saddened to learn that suicide bombers were using them to drive up from Kandahar, the Taliban’s spiritual capital, to Kabul to carry out their deadly missions.

And that was not the only Coalition contribution to Afghanistan’s future that was being used against it. The technophobic Taliban, there very ones who had ‘executed’ television sets and banned the ‘infidel’ internet on August 25, 2001 were now making snuff films of their beheadings ‘spies’ and ‘collaborators.’ I was told that these videos were now selling like hot cakes in the south and that the Taliban had even taken to down-loading streaming versions of them on their internet sites. That’s right, Taliban internet sites!

This was not the Afghanistan I had envisioned. I asked Afghan National Directorate of Security officials what had gone wrong. Where were the distinctly ‘un-Afghan’ suicide bombing, beheading, and horror films coming from?

Looking at me like I was an idiot, one NDS official made it blindingly obvious where he thought the problems were coming from. “They come from Iraq of course; we’re seeing the first example of the ‘Iraq effect’ in our country.” The problems, I was told, began when Iraqi insurgents like Zarqawi began shipping their motivational videos of beheadings, IED Improvised Explosive Device attacks, and suicide bombings to the down-but-not-out Taliban. Inspired and funded by their powerful Iraqi counterparts who wanted to open a second front, the Taliban had eagerly adopted the foreign horror tactics which clearly seemed to work. So much for technology and globalism being on our side.

By June of 2007 the number of suicide bombings in Afghanistan has surpassed last year’s level (over 50 so far) and the first Explosively Formed Projectiles, a deadly form of IED that has killed or maimed hundreds of Coalition troops in Iraq, have begun to appear in the Afghan theater of operations. While no one from the US military forces I met in Afghanistan would say so, the sad reality of Operation Iraqi Freedom is that it seems to have inspired the Taliban to new levels of savagery. It has provided a demonstrative effect that now threatens all the signs of progress that I thought were unstoppable in this long-suffering country.

As I drove through Kabul on my last day in the town last month I noticed that the Afghan Fried Chicken store was empty. While it may have just been a slow day, for me it was depressing and a tacit acknowledgement of failure. It reminded me that unlike the Iraq-obsessed American public, Al Qaeda and the Taliban had clearly not forgotten the ‘Forgotten War’ in Afghanistan.

For photographs of General Dostum, burqa-less women, ‘innocent’ Taliban prisoners and Kabul see my website; a slideshow of my journeys can be found here. 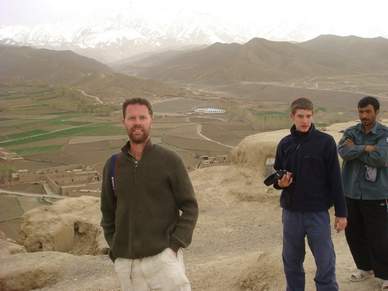