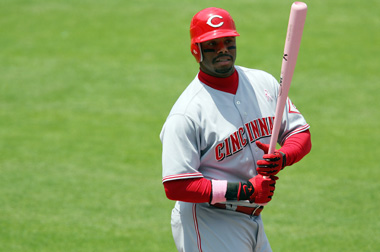 From a completely financial point of view, major league baseball is riding sky-high. Attendance is at an all-time high, revenues are through the roof, and despite those who have lamented its possible demise for years, it still remains America's pastime.

If you dig just below the surface, however, you will find that baseball is in a battle for its soul. The reason is quite simple: despite struggling recently and enduring shin splits, Barry Bonds is going to break Henry Aaron's record for most career home runs.

More than any other sport, baseball finds its beauty in its record book. The numbers bring alive players to whom many fans feel attached, even though they have never seen them play.

Numbers like 511 (Cy Young's career win total), 56 (Joe DiMaggio's hitting streak) and .406 (Ted Williams' batting average in 1941, the last time a major leaguer hit .400 over a full season) instantly conjure up images of the players who produced them and allow for a form of time travel that is unique to the game.

When Barry Bonds breaks the record (and only an act of God or the federal government can stop him now), all of that will disappear, because the most hallowed record in team sports will have become meaningless. Baseball will find itself at a crossroads.

How do you celebrate (or ignore) someone who has climbed to the height of the game by virtue of cheating? And make no mistake: Barry Bonds has cheated. Forget the fact that he has added 50 or 60 pounds of muscle as he's entered his 40s; the proof is in his hat size.

Of course, all this could have been avoided if Ken Griffey, Jr.'s body had not fallen apart on him. He was the one anointed to break Henry Aaron's record, and it's likely that he would be closing in on the mark right now if his legs hadn't given up.

Entering this season, Griffey Jr. had 563 career home runs. However, since the beginning of the 2001 season, he has only played in 554 games heading into this season (the equivalent of just over three full seasons). Conservatively you could put him down for 40 HRs for each of the three seasons that he missed, which would have had him closing in on 700 going into this season.

We all would have been behind this All-American guy for the next season and a half as he marched to 756. In that scenario, everyone wins. Major League Baseball gets to have its huge, gaudy ceremonies, fans go wild and the game's popularity receives a turbo boost.

Instead, the countdown to 756 for Bonds is more of a death knell for baseball, and sad as it is to say, the future savior of baseball's record book may in fact be Yankee shortstop Alex Rodriguez. In my opinion, Rodriguez is an all-world athlete dressed up in a chump suit, but of the current crop of major leaguers, he has the best shot to eventually unseat Bond's tainted record. Through 2006 he stood at 486 home runs and is only 31 years old, so 800 home runs is not out of reach for him.

The fact remains that there is not an asterisk in this world big enough to be placed next to Bonds' record. It's going to be a black eye that baseball will have to live with for at least a decade, but that's not the worst of it. Five years after Bonds retires will come an even more important question: will he be allowed into the Hall of Fame? Before he let the juice get in the way, he was unquestionably on his way to a Hall of Fame career; that is now in jeopardy.

Baseball has painted itself into a corner by ignoring the problem within the game for so long. Perhaps following the strike of 1994 the powers that be were afraid of cracking down because the long ball was restoring people's love for the game. The 1998 home run chase between Mark McGwire and Sammy Sosa effectively wiped out any vestiges of the strike, much as Babe Ruth's slugging exploits restored fans' faith in 1920 following the "Black Sox" scandal of 1919. Perhaps they couldn't see a way to stop it, or, worse, they just didn't care.

But as a result, the next generation of fans will have to sift through the record books and try to distinguish what is real and what was attained by fraudulent means. That's the real reason for concern, because baseball is nothing without its history."