Mervan Osborne’s recent post made a great deal of sense to me. As a former high school history and humanities teacher (independent and public schools) and a member of the Education Department at Tufts, I found that race was a topic that, in some way, shape, manner, or form I had to address with my students every day. The term, as we all know, is loaded. It carries with it a great deal of baggage. Our students have generally learned that it is a subject to avoid in public, because it can suddenly turn explosive.

But, as teachers, we can’t ignore it—for all the reasons that Mervan noted. So, how to address it? There isn’t just one way or one safe way or one perfect way to do so. I will, however, offer some thoughts on things that I have tried in order to raise the issue in a productive way—one that fostered discussion and interest rather than falling into preaching or mutual incomprehension.

What’s in my students’ heads? That’s what I need to know first. I often, therefore, try to “deteach” initially. What are the pictures they carry around with them? Where are they coming from? I often ask the class to draw a physicist as quickly as possible. Usually, the drawings come out as a cross between Albert Einstein and me. Only rarely will the physicist be a woman. Indeed, only occasionally is any image other than that of a bald white guy with a pencil protector in his pocket very common. Why is that? We know intellectually that physicists come in all shapes, sizes, and colors. But our experience tends to push us toward a common, widely recognized image. We carry, even with all our content knowledge, pictures in our mind, and these pictures have power. Right after World War II, Otto Klineberg defined those pictures in our minds in an article on differences as “stereotypes.”

I often use this Garry Trudeau cartoon in class. 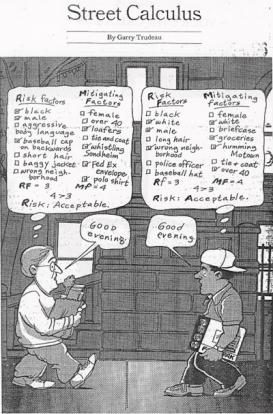 I ask my students if they think it is true. Invariably, they do. Women tend to speak about it more quickly. They are always making calculations about safety and are allowed to say so. Although many men also make similar judgments, it usually takes them a little longer to comment about the accuracy of the scene that Trudeau portrays.

His use of “risk” factors and “mitigating factors” mocks the processes we go through. These factors are, of course, all pre-judgments that we make. I’ve met many teachers who want to speak about race in class, and some of them try to create a setting of openness by declaring that there will be “no prejudices in this class.” That often results in no class at all. We have to recognize that we all carry stuff. The point of looking at Trudeau’s cartoon and then talking about our own mental processes in such circumstances is that we have to recognize the differences between the facts of a situation and our prejudices about them.

Our language itself is filled with assumptions and judgments. High school students often see the word “discrimination,” like the word “prejudice,” as a “bad” word. Someone who is guilty of discriminating is a racist. Discrimination, of course, literally means the ability to tell differences. Don’t we want our students to know how to do that? Of course, we do. If we teach about race, therefore, we have to be able to define our words precisely. Words that we often use carelessly have to be clearly understood when we use them in this context.

Equality is such a word. We talk about it as if we all agree about what it means and what its implications are. I often have enjoyed putting the famous words from the Declaration of Independence on the board. “We hold these truths to be self-evident, that all men are created equal, that they are endowed by their Creator with certain unalienable rights, that among these are life, liberty, and the pursuit of happiness?.” Although students are rarely asked to memorize these any more, the phrases are quite familiar. But they are less often discussed.

I ask my students where this comes from. Often the results are mixed: the Declaration of Independence and the Constitution are usually guessed. If you ask how many are sure they know where this comes from and whether they would bet on it, their degree of certainty will drop appreciably. This has taught me much, too. Few students actually know the difference between those essential American documents.

When then asked whether they agree with this, most say yes. If I press them (and you can see that I love to do so), often a young woman can usually be counted upon to question the “all men” section. I then ask them whether they believe that all people were created equal. They often become uncomfortable. They know that some members of the class seem “smarter” than others. They realize that some are better athletes. What does equal mean? Equal how? When? In what context?

I then often use the Kurt Vonnegut short story, “Harrison Bergeron.” Vonnegut’s story forces us to confront a futuristic society in which everyone, except the Handicapper General, Diana Moon Glampers, is made equal. Mental and physical handicaps are used to slow down or weaken the strong and, therefore, enforce equality. Is that a good society? A good idea? A bad society? A bad idea? Would you want to live there? Why or why not?

This story makes us uncomfortable. It takes a concept that we think we know and carries it to an extreme that worries us. When we no longer recognize our society, does that help us understand our own? There is a huge gulf between recognition and understanding.

I have now gone on for nearly a thousand words and I haven’t really talked about starting a discussion of race. Instead, I have asked students to think about what they think they know, to look at a cartoon, and to define some words that we will need. All these are essential to help us talk about race intelligently and carefully. We’ll look at more stories, photos, drawings, and primary source statements as we move along. But these early activities are, I think, critical in setting the stage for the discussions that we need to continue all year. All this initial work reminds me of the last line of Philip Roth’s Portnoy’s Complaint. After Portnoy’s two hundred and seventy-four pages of kvetching (Yiddish for complaining), the last line of the novel reads, “So [said the doctor]. Now vee may perhaps to begin. Yes?”