So what is American liberalism, and how (if at all) has it changed since the 60’s? Is it truly

as irrelevant to our times as the "re-branding" of Senator Clinton and others would seem to indicate? In its broadest meaning, the classical political liberalism that emerged in the 17th and 18th centuries – based upon constitutional government and individual rights – is an intellectual heritage shared by liberals and conservatives alike. It was in the late 19th and early 20th centuries, heralding the emergence of corporations and the rapid expansion of wage labor, when today’s liberals and conservatives began to part ways.

The essential difference revolved around their approach to what was called the “social question”: what is to be done about the poverty and insecurity generated by the new economic and social order? Or, to put it somewhat differently, is the unequal distribution of economic power a threat to liberal government? Future conservatives thought freedom was best protected by property rights, contract, and a limited government, and generally denied the existence and relevance of the whole idea of “economic power.” Pushed by social movements as well as theological developments (the Social Gospel for Protestants, and the papal encyclical Rerum Novarum for Catholics), future liberals began to articulate a broader definition of effective freedom, a more robust conception of power, a moral need for social solidarity, and a new role for government. 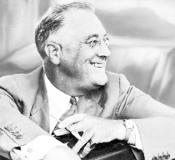 Modern American liberalism came into its own under Franklin Delano Roosevelt in the thirties and forties. The commonly told political story is that liberalism triumphed in 1936, and in the post-war era shaped a politically dominant “consensus” that wasn’t shaken until the late sixties, liberalism’s “high water mark.” Liberals were never really as dominant as people think; conservatives had limited liberals from the very beginning of what’s understood as the liberal/conservative dichotomy, not suddenly in the 60s. The New Deal coalition patched together by Franklin Roosevelt in 1936 was limited from its inception by the political and racial conservatism of the apartheid South, as well as by a conservative business class that became increasingly active politically in the Cold War era. The ability of liberalism to grapple with the two central dilemmas of 20th century American life – the social question, and race – was severely circumscribed by steady opposition from the very beginning. While one can certainly criticize the limits of liberalism’s reach on these two issues (particularly the latter), one must also properly understand the limits of its grasp.

Pushed by the reborn labor movement, Franklin Roosevelt provided American liberalism’s answer to the social question. Liberalism borrowed its moral sensibilities from the seemingly “unliberal” notions of solidarity and interdependence, but deployed them in the service of liberalism’s essential concern: freedom. Because of the Great Depression, Roosevelt argued, “we have been compelled to learn how interdependent upon each other are all groups and sections of the population of America.” This interdependence convinced Roosevelt that “true individual freedom cannot exist without economic security and independence,” because “necessitous men are not free men.” In an economy dominated by “the often intangible forces of giant industry,” Roosevelt argued in 1938, a person’s “individual strength and wits” cannot guarantee security or freedom any more. More than anything else, Roosevelt argued, Americans want “work, with all the moral and spiritual values that go with it; and with work, a reasonable measure of security” for them and their families. Modern freedom required an opportunity to make a decent living – not just enough to live by, but also “something to live for,” in Roosevelt’s words. American liberalism was a public philosophy of both individual freedoms and social solidarity. Not only were these things not mutually exclusive; they depended upon one another.

The imbalance of economic power in American society, Roosevelt insisted, had led a growing number of citizens to believe that liberty was no longer real. Government must do more than just protect the right to vote; it must also “protect the citizen in his right to work and his right to live?freedom is no half-and-half affair.” This would not deny individual responsibility; rather, it would define it in a way that seemed reasonable and fair to people in the real world. Freedom from desperate conditions – security – was thus an essential supplement to political freedom. This was an old idea, deeply rooted in the nation’s founding. It was based on the old republican notion of freedom as "self-government," as articulated by Paine, Jefferson, and many others. The needy lack the independence and security to be self-governing, and thus they are not free citizens.

Roosevelt’s answer to the social question became the centerpiece of a powerful public philosophy that dominated American liberalism into the 1960s. Indeed, throughout the developed West (and Japan) in the decades after World War II, the notion of a “social contract” that democratized wealth and opportunity became widespread, contributing to economic expansion and the growth of a stable and prosperous middle-class. Welfare states were established, embodying a generation’s hopes for universal economic security and protection from the worst of life’s hazards. In the US the G.I. Bill typified this use of Hamiltonian means to Jeffersonian ends, helping to spark a massive expansion of home ownership and college attendance. Economic, tax and social policy, investments in infrastructure (highways, education, and especially housing), and the growth in collective bargaining, were primary factors that helped to broadly distribute the nation’s unprecedented prosperity. This, in turn, provided widespread access to property ownership, education, and mass consumption for millions of white Americans.

Today, liberalism no longer concerns itself with the "social question." Indeed, it has not done so for decades now. It is this, as much as anything, that lends credence to many of the criticisms directed at liberals from all sides. It isn’t that liberalism lacks any kind of moral core, as conservatives assert; nor is it overly individualistic and rights-based, as more friendly critics contend. For much of the 20th century American liberalism was a public philosophy grounded in social solidarity and a moral (and even theological) critique of inequalities of power.

There are many reasons why the social question has dropped out of American political discourse. One could argue, for example, that the institutional and geographic underpinnings of social solidarity have greatly eroded in recent decades, as white Americans decamped to the suburbs, our older cities imploded under the pressure of economic change and racialized neglect, and unions lost their radical edge and then their membership. Only a militarized patriotism seems capable of successfully evoking solidarity today. One could argue that the inability (and frequent unwillingness) of liberals to overcome white resistance to a solidarity that fully included black Americans generated a chastening backlash against all active government. The growing political power of corporations has also played a role, joining with conservatives to fetishize “free” markets and deny that government has any meaningful role to play in shaping the material preconditions of effective freedom.

Historian Robert Dallek cites a comment someone made to Eleanor Roosevelt shortly after her husband’s death: “I miss the way your husband used to speak to me about my government.” Government, even metaphorically, is not the enemy; it is, after all, “our” government. When Senator Clinton runs away from liberalism, she runs away from this bit of hard-won political wisdom. A politics that dissolves the personal connection between citizen and government in favor of an adversarial one threatens to undermine our capacity for discussing and meeting common needs. Like an autoimmune disease, an unreflective hostility to government threatens to turn the protective forces of the body politic against the body itself. As Franklin Roosevelt eloquently put it in 1936, “better the occasional faults of a Government that lives in a spirit of charity than the consistent omissions of a Government frozen in the ice of its own indifference.”
–Mark Santow, Professor of History, UMass Dartmouth