The Rest of the World

A couple of weeks ago, when I was in Ireland, one of the foreign ambassadors posted there (who I suspect would prefer to be left unnamed) told a story at a dinner party. It went like this. The United Nations recently sponsored an international survey, asking the populations of 90 different nations to “offer their personal opinions on the relationship between prosperity and want in the rest of the world.” The results were predictably disappointing. For example, the Western Europeans had difficulty imagining “want,” while the Africans had equal difficulty imagining “prosperity”. The former member-states of the Soviet Union needed help with the phrase “personal opinions” and the Americans wondered what was meant by the “rest of the world."

Echoing a biblical parable, we all have our own personal and national eye-motes or blind spots, and we usually do best to see to our own before offering to remedy those of others. And as Americans, one of most disabling blind spots is arguably that often our minds fall blank and our hearts grow cold when we are forced to consider the rest of the world. We see them as strangers, as indeed they are. So the first decision we must make is how to regard the stranger. 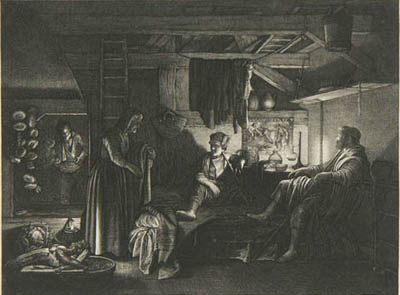 In the ancient world, the answer was morally simple. Until further notice, the stranger is a friend. Ancient rites of hospitality, as nearly universal as any human custom I know of, required that those with roofs must embrace, house, feed, and protect those who come to their door. “He who gives me something to eat,” runs an old Irish proverb, “wants me to live.” This fundamental goodwill and affirmation, due to and from us all—you and I and the “rest of the world”—is what made human co-habitation on the planet first thinkable and what offered at least temporary ritual redress to those experiencing fundamental want—want of a roof or of a meal. The bond between host and guest—the giver and the gifted—was all but unbreakable, across generations. On the battlefield of Troy, as sung in the Iliad of Homer, warriors drop their spears and step back from each when they discover that there exists between them a bond of guest-friendship. Once stranger-friends, always friends and never enemies.

The suggestion here is that we can do no better than to see in the stranger—“the rest of the world”—a friend. How do we do this? One stranger at a time. Several weeks ago, in Switzerland, a total stranger asked me where I was from. I answered that I was from the United States, expecting hostility. Instead he smiled, put out his hand, and said “Nobody’s perfect. I’m French.” As Americans, especially after 9/11 we have come to suspect, at best, the rest of the world. For the sake of discussion I would suggest that even in a world as dangerous as ours, it is in the end easier to make friends that to defeat enemies. This may appear naive—until we compare it with the naivet of “shock and awe,” smart bombs, regime change, and the prophesied Pax Americana. Far better, in my opinion, to start with extending the hand and admitting “Nobody’s perfect. I’m American.”