I recently heard from an alumnus who was being sent back to Iraq for his second tour of duty there. This news elicited all sorts of emotions, sadness and anger in particular.

The sadness stems from concerns about the fundamental wrongheadedness of unilateral US foreign policy. (I know about the coalition forces, but don’t be fooled by that. This policy was conceived and initiated by one nation.) I am also sad because unilateralism is not the only tradition in our foreign policy; indeed there is a highly successful tradition of more cooperative policy going back to our founding as a nation.

It might seem that the country was founded unilaterally, but in reality independence was gained cooperatively. In 1774, one could look at the thirteen colonies and wonder if they would ever work together. It wasn’t easy to accomplish, but those fractious members of the Continental Congress did eventually produce a Declaration of Independence. In addition to cooperation among the thirteen former colonies, the new confederation obtained important financial and military support from France, and the Dutch also provided financial support. When that confederation did not provide enough cooperation among the states, once again the founders met and democratically devised a federation (our current Constitution) which has produced a nation of fifty cooperating states.

The first three presidents were cooperators. Trade has always been an important part of US foreign relations. Washington’s advice for expanding trade was to diffuse commerce gradually, forcing nothing. Adams could have acted unilaterally in response to the French crisis during his presidency; he could have given the Federalist Party the war they wanted with France. But instead he prepared for war while successfully negotiating peace. Arguably, that peace with France made it possible for Jefferson to purchase Louisiana a few years later; he did not unilaterally take it, the way we had been unilaterally taking land from American Indian nations.

One might argue that these were actions taken at a time of weakness. The US certainly was weak at that time, as became painfully clear in the War of 1812. But such an argument misses the point. The cooperative policy was effective: we gained our independence; we protected our independence against France; we expanded our commerce and our boundaries.

As the US gained strength, unilateral action was dominant (against Mexico, American Indian 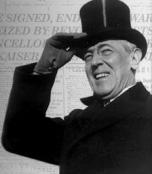 nations, Spain, the Philippines). But in the first half of the twentieth century the US often acted cooperatively. Wilson moved from unilateralism in World War I to full US participation as an associated power with troops fighting in Europe. He was also years ahead of many Americans in proposing the League of Nations. While the League failed, the idea bore fruit after World War II in the United Nations (unilateral US rejection of Wilson’s baby was a major factor in the failure).

Participation in World War II was extremely cooperative. What would have been the result without the massive sacrifices and contributions from Russia and Britain? Without in any way diminishing the bravery of our soldiers and seamen (my uncle among them), it was simply more effective to align with Great Britain and the Soviet Union. The war was won more rapidly with fewer US lives lost than had we acted alone. (Would the fascists have won had we acted alone?)

After the war, cooperative policies restored Europe to political and economic health. The Marshall Plan required European recipients to plan together. The United States provided the economic muscle, but the European nations made it work efficiently by cooperating with one another and with us. Marshall Plan aid was a bargain because the US profited enormously both economically and politically. Economically, we benefited from the thriving trade resulting from the Plan; politically, the stability stimulated by Marshall Plan aid provided strong allies in the Cold War. Since then our basic economic policy has emphasized global interdependence. While we have, at times, aggressively exported that policy (forgetting Washington’s advice to diffuse commerce gradually), one cannot compare it to the unilateralism of our Iraq policy.

We have two distinct foreign policy traditions. We have been unilateralist/imperialist at times and we have been cooperative at times. The cooperative approach has, in the past, paid huge dividends. The unilateral policy now is making the world a more dangerous place.

Psychologists will have to analyze the macho nature of unilateral US foreign policy, but, as a historian, I am concerned that we are forgetting a major tradition, that of working cooperatively with other countries. That tradition provides a model for a more effective defense of US interests in the twenty-first century.

We have a powerful ideology that could reinforce cooperation. The idea that all are created with an equal right to life, liberty, and the pursuit of happiness is enormously attractive throughout the world. Combined with our economic success, that is a powerful model. But that power is vitiated when we contradict the model implicit in our own quest for independence from Great Britain. We cooperated with others to gain our independence from imperialist Great Britain. Now we are the imperialists.

What about the anger? I am angry with myself for my na vet in thinking that a nation’s foreign policy should be rational and in thinking that the will of the people means something in a democracy.