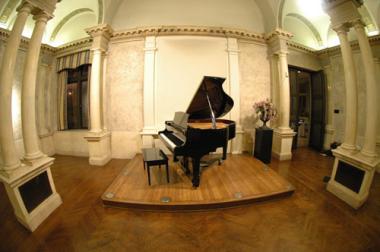 Though Austrian composer Franz Schubert didn't receive many accolades for his work while he was alive—his work didn't become popular until after his untimely death at age 31—he certainly had a reputation for enjoying himself. A true Bohemian, Schubert counted on friends and family for basic comforts such as food, drink and a roof over his head. He did, however, provide those around him with entertainment in the forms of his music and his charming wit.

While still a student, Schubert, who was allegedly (affectionately) often called "The Little Mushroom" due to his short stature and excessive girth, played the viola in a weekly concert at his home, along with two of his brothers on violin and his father on the cello. Later, when he was living off and on with various friends, the composer would play host to his cronies—fellow musicians and artists—at salons known as "Schubertiads," which were held in the homes of Schubert's patrons. During these festive evenings, Schubert himself or another musician would debut one of his latest compositions, of which there were always many, as he wrote feverishly.

Although Schubert tried his hand at writing operas (none were ever truly successful), he is best known for his art songs or Lieder, including perhaps his most famous work, Ave Maria, to whose music he originally gave different words than those in the modern version.

This week in Holyoke, a group of musicians is performing some of those art songs, in a recreation, complete with period costumes, of a Schubertiad. This historical reenactment of a festive gathering of Schubert and his contemporaries focuses on the composer's part-songs for men's chorus, some of the few works that enjoyed relative popularity while he was alive.

Schubertiad takes place on Sunday, Nov. 11 at 3 p.m. in the Belle Skinner Music Room at the Wistariahurst Museum, located at 238 Cabot St. in Holyoke. Tickets are $15. For more information contact the museum at (413) 322-5660 or log on to www.wistariahurst.com.