The Sixties Commune: What if the Past Just Won't Be History? 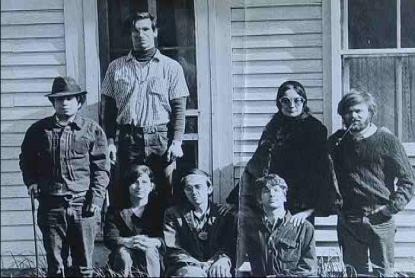 In the spring of 1968, Verandah Porche, born Linda Jacobs and then Queen of the Bay State Poets for Peace, hitchhiked from New York to rural Guilford, Vermont, clad in candy-stripped bell bottoms, a shoulder length fur cape and bubble sunglasses. Her intent: to hasten the dawn of a new age by starting a commune. Looking like a very hip cross between Edie Sedgwick and the Red Baron, she posed for an American Gothic-Gone-Hippie-Freak photo commemorating the founding of the Total Loss Farm.

It’s approaching forty years since the founding of Total Loss, and its sister commune, the Montague Farm in Montague, Massachusetts. Forty years ago is history, right? It’s time to start doing what humanist do–analyzing, comparing/contrasting, figuring out if these sixties experiments in collective living and the counterculture they epitomized meant something in the long run.

This year, the wave of 1960s historicizing is rising with the Whitney’s retrospective on “Summer of Love: Art of the Psychedelic Era,” PBS’s “Baby Boomer” series and articles like the one in the San Francisco Chronicle entitled “1967: The Stuff That Myths are Made Of.”

Yet, I note hesitation in the analysis. It is as if this era stubbornly refuses to become past at all. Forever pop culture, the 1960s counterculture in particular simply will not go forward into that good night of history.

As a co-producer of a documentary on Total Loss and Montague, I have thought about why we have such a hard time viewing these communes, and other aspects of 1960s counterculture, through the lens of history rather than, at best, the lens of caricature or nostalgia. I’ve got no answers but a few possibilities.

First, a little more whining about Baby Boomers. There are an awful lot of folks (about 25% of the American populace to be exact) who were adults in 1968 and may have a hard time seeing a treasured point in their youth as history. If 1968 is history, then, well, people who experienced it are, well, old. In my high school AP history class, we interviewed WWII veterans. It was 1982, 41 years since Pearl Harbor. The veterans relished giving us insight into a distant past. While the members of Total Loss report they are starting to get emails from high school students doing papers on the 1960s, they don’t seem to jump at the same opportunity to be a wise old sage.

Second, perhaps the problem is the visuals. The sepia-toned 1962 Cuban Missile Crisis is definitely “history.” But is the technicolor Summer of Love just five years later? The mid to late 1960s are the first era recorded (and broadcast) in living color. Does so much visual documentation of the era, all in color, make it seem all the more “present” rather than past?

Third, the 1960s counterculture may validate Faulkner’s remark that the past isn’t even past. Many people continue living the ethos of that moment as the accompanying entry on contemporary communes demonstrates. A San Francisco Chronicle piece on the Summer of Love summed it up saying it was “just a season, but it lives.”

Finally, is it just hard to take the 1960s counterculture seriously enough to place it into the context of history? Heck, I started this blog entry comically describing one of the central figures in my documentary as a cross between Andy Warhol’s femme fatale and a “Peanuts” character! The Total Loss and Montague members themselves equivocate. At times, they see themselves as a step in the proud American utopian tradition stretching back to Emerson and Alcott’s attempt at communal living at Fruitlands. At other moments, they were just a bunch of city and suburban kids who wanted to play in the woods during an era when not making much of a living was still possible.

A few weeks ago, I made a first-time visit to Fruitlands. As I approached the red farmhouse, beautifully framed in the midst of orange, red and yellow fall trees, I thought to myself “My God, it looks just like the house at Montague!” Fruitlands holds a hallowed place as perhaps the American utopian experiment. Yet, the Transcendentalists indulged in some behaviors that made the hippie communes look mainstream—rigid diets of fruit, barley, beans and potatoes, eschewing wool as “stolen” from sheep and flax clothing. They also lasted all of seven months and nearly starved.

Touring the rooms, I wondered how anyone took the Transcendentalists seriously. I also wondered if Verandah Porche, still living in the Total Loss farmhouse twenty years after the commune disbanded, might raise money for repairing the roof by offering guided tours. But, whatever the reason, I just don’t think we will ever be ready for a national historic landmark in the woods of Guilford or Montague?.

–Jennifer Gilbert, Co-Producer of Far Out, an in-process documentary directed by Chuck Light about Total Loss Farm in Guilford, VT, and its sister commune, the Montague Farm in Montague, MA.