Keeping it Relevant: A Look into the New Historic House 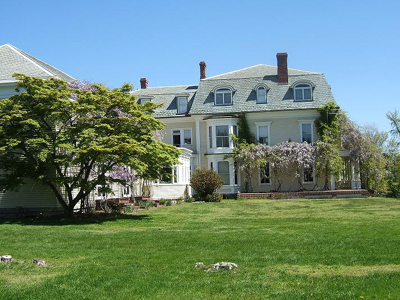 Wistariahurst Museum has been many things over 130 years: it was once a home; a facility; a natural history museum; a youth center; a reception hall; and finally, an interpreted historic house.

But we want to be more than just a historic house, don’t we? Visitation to historic houses has decreased over the past few years, so do we want to keep the beautiful house open to the public for docent-led house tours? How else can we interpret Wistariahurst?

Wistariahurst is a building, a living artifact, that tells many stories. It tells a story of a man, William Skinner, one of the many immigrants who moved to this country and took advantage of the rich resources America offered. He learned to dye silk as an apprentice to his father in London and within five years of immigrating to America, he was operating his own silk mill.

The house also tells the story of Belle Skinner, a woman who grew up in Holyoke attending Holyoke’s public schools and then ventured to France during World War I, eventually adopting a village there, rebuilding after the war’s destruction.

From the building, we also learn about servants who worked tending to the needs of the Skinners – whether it was in the acres of gardens, within the walls taking care of children, or driving the carriages to and from the mills and summer homes. Hulda Klemm, first hired as a nurse for Sarah Skinner, remained a loyal live-in employee to the family for nearly 50 years.

Michael Frisch in A Shared Authority argues that public history has a capacity to redefine and redistribute intellectual authority so it can be shared rather than locked up in an archive. In keeping a historic house relevant, it is essential that we live by this credo. While there are clearly many ways to tell the story of an elite family living in a mansion during the Industrial Revolution in America, there is a need to tell more. As a curator, I saw the need to better represent and involve the authority of the people Wistariahurst serves or could serve.

As I set out to understand the people of Holyoke, past and present, I realized that all they needed was an invitation to speak and share what Holyoke’s past means to them. We began to collect and preserve photos of Holyoke’s past through a program Wistariahurst hosted called Share Your Old Photographs. While Wistariahurst holds a relatively large collection of the city’s landscapes and buildings, very few records reveal images of men, women and children and their activities in and among Holyoke’s buildings. The museum invited past and present Holyoke residents to share their family histories so that we may continue to record and document Holyoke’s stories. We asked for old family photos and pictures of Holyoke employees. Any participant who contributed photos for this digital project received digital copies to keep in their personal collection. These documents not only expanded our collections for public use, but will make history accessible in many different ways, includingwebsites, exhibits and other public venues.

We expected a sparse response to our request. We were, however, inundated with enthusiastic former and present residents of Holyoke who, at times, brought boxes of photographs and documents they had stored in their basements or attics.

One man, an avid collector of antiques, not only brought in photographs for scanning, but after numerous visits, realized that Wistariahurst as an institution cared so much for his treasures that he donated them for our use, saying “My children are not nearly as excited by these artifacts as you are. Please take care of them for me.”

Not only had we redefined what it is to be a historic house, through this program we took on the role of providing a place for historical engagement. We became a center for the complex interaction between people and history. People were sharing with me stories in the photographs and documents, but they were also, through the action of sharing, re-engaging with their own past and the history of Holyoke. Through this interaction, I could see that these Holyokers were not just connecting their past, present and future, but were looking at how they fit into it.

It is through these new programs that we realized Holyoke’s history holds many powerful stories: a story of invention as a mill town that evolved into a booming industrial town; a story of immigrants and migrants who redefined themselves with each new wave into the city’s borders; a collection of stories of families who struggled with retaining their own beliefs in a city with a fluid set of cultural patterns.

It does not end there. With a newly rediscovered passion for the history of Holyoke, rather than focusing only on the Skinner Family and Wistariahurst, we launched an oral history collection program that aimed to bridge the generation and cultural gap between Holyoke elders and younger Latino residents. With this and other programming we have redefined and redistributed Holyoke’s history back to its authority: the people who made, and continue to make, Holyoke the city it is today.