Revitalizing Cities: The Synergy of the Arts and Businesses

Those of us in the arts community clearly understand the important role that culture plays in the economic viability of a community. When there is a strong and stable arts and cultural community, people will come to take part in the programming whether it be theater, film, visual art, music or dance, and in turn look for places to eat, shop and relax before or after a cultural event. This correlation adds to the increased viability of a community and increases traffic in an otherwise depressed area.

We have seen this happen in the South End of Boston, in the Washington Street Area, now coined SOWA, South of Washington, beautiful new condos, art galleries that stay open late, and a number of new restaurants catering to those who are attracted to the new “Arts” district. 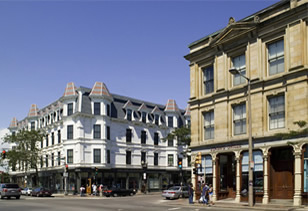 Square Area is one of them. With a new Arts Center at Hibernian Hall and renovated artist space in the square as well as new businesses and more being built, the square is on the cusp of a major revitalization.

Collaborations with businesses like the Haley House Caf and The Color of Film Collaborative’s Dinner & A Movie, ACT Roxbury’s Artist Open Studios, which works with local artists and businesses to display their art and support their program, and the Roxbury Film Festival that calls upon area businesses and sponsors to attract filmmakers from around the world to the Roxbury Area to screen films, increase the cultural and economic viability of a community. Roxbury has always been rich in culture and history. Movie theaters, jazz clubs and theatres, some dating back to the 1800’s, provided Roxbury with a wealth of culture. Over the decades the neighborhood has changed; urban renewal in the 60s and 70s destroyed a lot of the life, but slowly and surely it is coming back.

The New England Council report: “The Creative Economy Initiative: The Role of the Arts and Culture in New England’s Economic Competitiveness” (June 2000) stated that “as the economic environment changes, so too must our understanding of the role of the arts and culture in supporting it. With the remarkable convergence of creativity and technology taking place today, there are more links between the nonprofit and commercial sectors than ever before. This calls for new approaches and policies that will harness the entrepreneurial energy in the arts industry, and enhance the activity we see today. New England’s creativity is a critical asset when it comes to employment, community empowerment, enhanced quality of life and education – we have the opportunity, and the tools, to maximize it.”

With the changes happening in the Roxbury area, especially Dudley Square’s renovations of the Hotel Washington, restaurants, Hibernian Hall, and new office buildings and the Grove Hall Mecca with new restaurants and banking institutions and Egelston Square with the new BNN building and new businesses, the economic impact of all these new additions adds value to a once depressed neighborhood and allows for a kind of synergy between nonprofit organizations and businesses to create an environment for the resurgence of cultural arts programming that changes the face of a neighborhood and gives a community a strong sense of pride.

–Lisa Simmons, Founder and President of the Color of Film Collaborative