With Forks and Hope 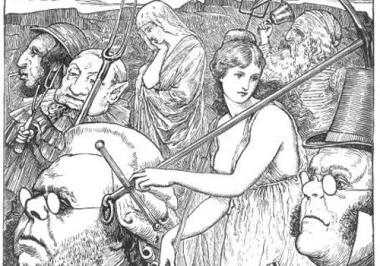 Lewis Carroll's work has been inspirational to a host of authors, illustrators, filmmakers and playwrights alike, his writings perhaps spearheading the genres of modern fantasy and/or literary surrealism. One can detect his influence everywhere from The Hitchhiker's Guide to the Galaxy to The Matrix, and few of his efforts are more entertaining than his absurdist poems, the most famous of which is probably Jabberwocky.

A slightly lesser-known but equally ridiculous bit of rhyme is The Hunting of the Snark: An Agony in Eight Fits, a poem which describes the collective search for a creature of unknown origin by a group of figures whose designations all begin the letter "B," (The Banker, The Bellman, The Beaver and five others). The poem borrows from Jabberwocky (such as references to other imaginary beasts like the Jubjub or the frumious Bandersnatch), and also has a typically Carrollian dark side (spoiler alert: The Baker may not make it). Some have even conjectured that these "nonsense" poems contain allegory or hidden meanings, though the author always cried ignorance in the face of such speculation.

Carroll may himself have been inspired by traditional "nonsense" writers such as Thomas Hood, and especially William S. Gilbert (of Gilbert and Sullivan fame), and so his work is perhaps naturally adaptable to the stage. In that spirit, the Hampshire Shakespeare Company performs a "comically dramatic" reading of the Snark as a means of helping to raise funds to finance some of its larger and more ambitious stage productions.