Behind the Beat: Eremitic Adventures 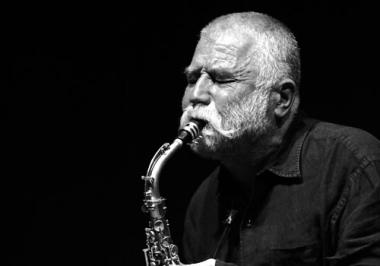 Iwas waiting for photos from Eremite Records label founder Michael Ehlers. I was trying to be patient, knowing that he was currently on tour with two of his artists, saxophonist Peter Brotzmann and drummer/percussionist Han Bennink.

Finally, one morning, a message arrived in my email inbox: the subject line read, "Annual Eremite Records Pig Roast." Yes! I was excited by the prospect of candid shots of some of the legendary avant garde jazz artists who have appeared like holy apparitions on Ehlers' Northampton-based label over the years. There was bound to be a priceless snapshot of larger-than-life bassist and band leader William Parker flipping burgers with altoist Jemeel Moondoc; trumpet great Raphe Malik hamming it up, arm around legendary Sun Ra cohort Alan Silva.

There was no accompanying message, so I quickly and nervously clicked on the picture titled "Pig 1." A giant, dead, stuffed pig lying on a picnic table filled up my computer screen. Ugh. With a little more trepidation, I clicked on "Pig 2." Surely this would be the intimate shot of drummer-extraordinaire Sunny Murray tipping back a cold Heineken. Nope. It's the pig. Again. From a different angle.

Advocate: Why name a jazz label a word that means "reclusive hermit?"

Michael Ehlers: Any record label's prehistory includes years of collecting and listening to recordings and going out to hear live music. During college I still enjoyed some of the same music as my peer group, but my needs were great at the time and I was forced to look elsewhere. It took a while to get my bearings, but as I started to listen to jazz, I realized very quickly that no music spoke to me as fully. My earlier life experiences had not prepared me to expect such range of expression and so rich and relevant a sense of history from music. I had something resembling a conversion experience.

Some years later, around 1994, the music writer [and Valley resident] Byron Coley encouraged me to put my strong interests in free jazz to some better use than collecting records. In a roundabout way, he helped me secure some start-up money for the label, and from there I stumbled into the fray. I took an old family name, Eremite, for courage.

What kind of music does Eremite promote, in your terms?

Well, it's worth noting that from the time "free jazz" first appeared in the jazz discourse over 50 years ago, it was already a rather arbitrary term used to describe musicians as different as Ornette Coleman, Cecil Taylor and Jimmy Giuffre. The term has never adequately reflected the diversity of the music it is used to describe. Having said all that, Eremite is definitely a free jazz record label, presenting work by artists who typically have some connection to the culture and practices of earlier free jazz traditions. Broadly speaking, all of these musicians formally employ traditional idioms on largely traditional jazz instrumentation: saxophones, brass, drums, bass, piano.

Nearly all of the musicians on Eremite have direct links to, or were themselves part of, one or more of the early "waves" of American free jazz. Sunny Murray and Alan Silva were members of Cecil Taylor and Albert Ayler's 1960s groups; Sabir Mateen played in Horace Tapscott's Pan African Peoples' Arkestra; William Parker and Peter Brotzmann played in Don Cherry's groups; Han Bennink played with Eric Dolphy. For the musician, the idea is to formulate a personal approach within these mazes of tribal history and precedent, to both represent and self-differentiate. For instance, if you play the alto saxophone in the free jazz tradition, you need to deal with the influences of Eric Dolphy and Ornette Coleman and Jimmy Lyons by developing your own unique response to their work without resorting to imitation. Seldom does a musician, even one in as supposedly "free" a medium as free jazz, emerge with a completely unique sensibility. Ornette Coleman, Albert Ayler, Cecil Taylor and Sunny Murray are possible contenders.

One of the main things to realize about the free jazz world is that it exists in its own independent realm. I doubt if it will ever be more than superficially assimilated into the larger jazz language, and it is itself hugely suspicious of influence and "corruption" from outside. While there are many other musicians—rock, jazz, composer, and other—in whose work you will occasionally hear episodes that borrow from free jazz, it's been my experience that the measure of a "lifer" free jazz musician is the extent to which he is too preoccupied finding a place within his own lineage to look outside it. Note the average age of a musician leading an Eremite recording! Documenting the work of these lifers has been Eremite's primary pursuit.

In retrospect, I see all of these points as qualities that drew me to an authentic and fiercely independent music. It is an honor to end up with a roster of aging artists on a label that promotes an historical "style" of music as the music business declines in annual increments of 30 percent. As for why I have recorded so many American free jazz musicians, it has been my patriotic duty to act as one of this homegrown but "under-resourced" art form's many caretakers.

What projects are you working on?

At the moment most of the projects I'm working on are of an historical bent. I'm re-issuing the record Red, Black and Green by Solidarity Unit, Inc. That one's out of East St. Louis, circa 1970, and the band originally issued it themselves. It's a bit of a rarity, and in its way is quite an important record. I'm trying to re-issue what for me is Sunny Murray's finest record, Big Chief, recorded in Paris, 1969.

I'm also working on a box set of records by Peter Brotzmann and Han Bennink. The box will be very nice and include visual artwork by both Peter and Han. The records will be in the 10-inch format, and there will be many of them. I have a second box set in the works, consisting of all of the 1975 Berlin concert recordings by the Frank Wright Quartet, along with some excerpts of Wright's unpublished book, The Saxophone Journal, a very truthful account of the jazz life as lived by the reverend Frank Wright.

You also promote and produce live shows and a radio program. Do you feel like you have to constantly proselytize to foster free jazz in the Valley?

In earlier years I definitely played the role of proselytizer. I believed myself that in its loftiest manifestations, the music did in fact contain real transformational properties, as in it could "do things" for people. I am no longer always of this persuasion.

What is your take on the state of jazz?

With respect to jazz anyway, my interests are very specific, and much of what is happening in this so-called jazz in 2008 I just don't pay attention to. The role of jazz education concerns me—it seems erosive to forming an individual voice in the music. I hear many young players who are excellent technicians on their instruments, and who have been taught to play historical styles of jazz accurately and with "accuracy of feeling." This approach may have its place, but is rather at odds with the true spirit and history of the music.

For more "creative" jazz musicians, we are also well into a new era. There appear to be many young players, products of jazz education or not, who are working towards more personal and creative goals. Relatively speaking, this is a large and well-documented scene. There are no gigs to play, really. There is probably no livelihood in it either, but there are "projects," self-produced or produced by small specialty labels such Eremite. Good luck, dudes!