Soundcheck: An Instrument for Good 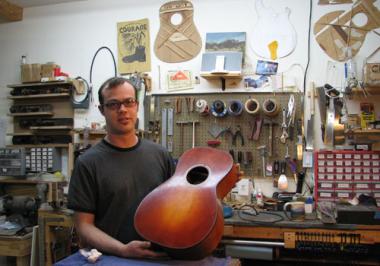 Peter Mulvey was in a bad way. The singer-songwriter had just flown in from Wisconsin to play a Sunday night Iron Horse show to kick off an extended North American tour. Upon opening his road case, he discovered his guitar had been trashed in transit. Luckily, Mulvey had the phone number of local luthier Louis Freilicher.

"His guitar had cracked up like a clam. The sides had split almost all the way around the guitar," Freilicher says. "He wound up doing the Horse show with the guitar held together with packing tape. The kicker was that on Tuesday he was supposed to be on a plane out to the next show." Freilicher got Mulvey's guitar back to his workshop around 10 p.m. "I got the cracks lined up and glued tight, then caught some sleep while the glue set up," Freilicher says. "Early the next morning I started to reinforce the sides with thin strips of spruce."

Mulvey picked up his guitar later that night, thrilled to find his favorite axe back together for the rest of the tour.

"These are the jobs I really love to get involved with, the ones that are just shy of impossible to get done in the amount of time you have," Freilicher says.

Freilicher began his career in instrument design, construction and repair by tinkering with his own instruments while studying at Berklee College of Music in Boston. He transformed his dorm room into a makeshift workshop, repairing other students' guitars. This self-education led to more formal training at the Leeds Guitarmakers' School in Northampton and in turn to the opening of Freilicher Guitars in Belchertown in 2001.

Freilicher does repair and restoration on all stringed instruments, from set-ups and adjustments to "major reconstructive surgery." He builds a few instruments a year, from flat-top and hollowbody electric guitars to five-string banjo necks, most based on classic designs. He also makes custom knobs, acoustic guitar bridge pins, and parts and tools for other makers and builders. Freilicher adds, "A few years back I got into machining and metal work to be able to build specialized tools and fixtures for guitar work, so, along with the wood shop, I have a pretty well-equipped machine shop, too."

Freilicher makes a case for his craft in the age-old factory versus handmade debate: "A vast majority of factory-made guitars fall into the good but not outstanding range. An individual maker can take into account subtle variances in materials and make small adjustments to his or her bracing or top thickness." And he enjoys what he does. "I love every minute of my work," Freilicher says. "Every project has a new challenge or twist… and I try to come out with an instrument that exceeds the player's expectations and is one they never want to put down.""

For more information on Freilicher Guitars, call 413.348.5575 or visit FreilicherGuitars.com.