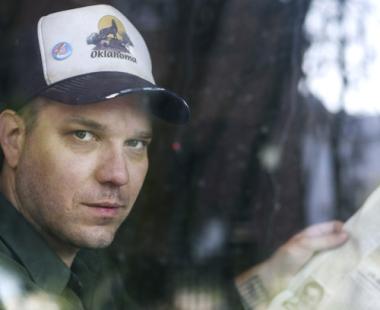 Certainly a novel move, as electronic press kits go. But really, to include choice excerpts from a scathing review and even include a link to the entire article in such a prominent position on a band's website–could this Low Anthem be high?

"We just thought it was fascinating that someone would react so strongly to a collection of songs," says Ben Knox Miller, singer/writer for the Rhode Island-based band, referring to the 1,300-word slam in his local paper lambasting his new disc, Oh My God, Charlie Darwin. "I actually take it as a profound compliment."

In fairness, no less than four other publications of note did profoundly compliment the Low-somes on the new product, with the Providence Daily Dose dubbing Darwin a "devastatingly beautiful record of love, death and the death of love" and the Aspen Daily News declaring it a "finely woven, multi-textured" experiment in sound.

With a CD release party slated for Easthamp's PACE this Friday, Miller adds that he's hoping folks in the Valley will agree with the majority opinion. Based on his experience in the Bay State, he believes such optimism is well founded.

"People in Massachusetts get the whole Americana thing—the historical trajectory of American roots music," he concludes. "There are so many great clubs, and the scene is alive& I just hope you all know how good you have it!"

The following night at PACE, Sept. 13, will feature fellow folkie Chris Scanlon and his latest studio effort, U-Turn. A former member of the band Plump before striking out on his own path to singer/songwriter-dom, the Noho-based artist has long-since established himself as one of the area's great homegrown talents.

It appears that the "homeboy" scarcely had to leave his home residence to find his current partners in song. "I hastily put out an ad for a bass player a while back, and my upstairs tenant responded. I didn't even know he played," Scanlon admitted. "The same with the drummer I found; he turned out to be a friend from across the street. Throw in his housemate on fiddle, a keyboard player from a block away, and there goes the neighborhood!" For more info on both PACE engagements, kindly point your browser to pioneerarts.org.

In other news: Hard to believe, but it's already time for some of our "fair" weather friends and otherwise fall-related festivals—the first of which echoes some of the previously mentioned Valley-touting sentiments of Ben Knox Miller.

"Ours is a celebration of the rich artistic culture that makes the area so unique," states Levin Schwartz of The Session For Expression II, an evening of "music, theater, food, drink and splendor" at Greenfield's Pushkin facility from 4 p.m. to 1 a.m. Sept. 13. Entering the eclectic fray are The Primate Fiasco, Rusty Belle, Appalachian Still and The Amity Front, among others (check the event's myspace at .com/sessionforexpression).

Also in Greenfield, the ninth annual Wormtown Music Festival at Camp Kee-wanee Sept. 12-14 will unearth a myriad of talent, including Stir Fried with Buddy Cage and Johnny Markowski of The Riders of The Purple Sage, Max Creek and much more.

Just across the state line, the SophistiCats, Article 19 and Aquanett will adorn the festivities at Somers, Connecticut's Four Town Fair tonight through Sept. 14. And look for U.K.-popper-cum-U.S. charter-topper Natasha Bedingfield to kick things off at the Eastern States Exposition Sept. 12.

Last up, some tragic news from the Millions Dead camp, as Kevin Pravia, the brother of the punk band's lead singer Mike, was reportedly found dead in his West 15th Street digs earlier this month. A memorial concert is already in the works, and the Crawler promises to pass along the specifics as they become available.