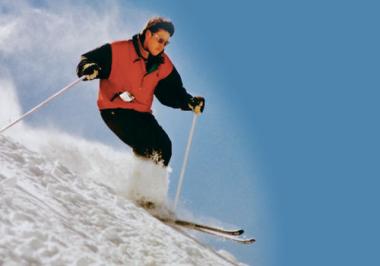 This is a discussion that has been going on for quite a long time. As a little kid in New Hampshire, I remember driving up to Mount Sunapee just to watch "them" ski. It was in the 1950s and "they" were from another planet as far as I was concerned. Big, woolly creatures wearing dark glasses slid down the mountain on long wooden boards.

Skiing was something other people did—people with money. I remained on a sled through most of my teenage years. I didn't start skiing until I was about 20. Some friends talked me into it and I pieced some bargain gear together.

My first foray was at Mount Tom with a young woman from Greenfield. We went up the rope tow and she made a couple of turns to a place where I was supposed to stop—but it didn't happen that way. She disappeared out of my field of vision to the left and I kept going at lightning speed, finally crashing into all the skis stacked at the base of the slope.

Still—I don't know why—that didn't deter me. About two years later I was on a skiing trip to Switzerland with a group from Cathedral High School in Springfield. Looking back, I think it cost $349 for everything! It included air fare, hotel, skiing and meals. I was told I might never have this opportunity again. They ran the same trip the following year, and I was hooked.

Ever since then I've had a passion for the sport, and have done everything I could to support the habit. Sure, it's cost some money, but it's gotten me all over the world and given me some great friends for life. Priceless!

At a meeting of ski writers in the early '80's, for example, I shared a room with the head of the Austrian Tourist Office in New York. I was on the radio at the time and was able to get my new Austrian friend, Gerhard, on Jack O'Neill's Sports Talk show. In return, I was invited to ski in Austria& not a bad deal. I used the knowledge I gained on this and other trips to Austria to run my own tours.

You can tick off the highest-priced ski equipment and the most expensive resorts and reach the conclusion that skiing and snowboarding cost too much. Looking through the reviews in the magazines and seeing skis and bindings from $700 to $1,400 can bring sticker shock.

But there are plenty of ways to get skis for less. Last year's models can cost half as much as this year's, even if they were highly rated last year. Shops also have early season and late season sales. Beware of used equipment at tag sales, though. Some of the stuff might be outdated and unable to be brought up to par.

For kids, the best way to go may be leasing skis or snowboards for the season. Many schools have ski programs that include transportation and get the kids skiing or snowboarding at affordable rates.

Stratton, Vermont has its new Stratton Mountain Club. It costs upwards of $50,000 to join. You get private parking, quiet dining rooms and exclusive access to the gondola. My friends would all be elsewhere.

What kind of skiing customers do these amenities attract? I've seen people pay lots of money for private lessons just to cut the lift lines on busy days. An instructor friend said he was told not to teach, just ski.

I rode up on a chairlift at a Vermont ski area with an apparently well-off but not so friendly woman. I asked her where she was from and she said, "The City." I said, "Rutland?" You should have seen the look I got.

But it has been all of us who have driven up the price of skiing by expecting better snow conditions and more mountain services. It's hard to find ski areas with rope tows or T-bars any more. Gondolas are replacing chairlifts and Magic Carpets are being installed for kids to stand on and ride up the learning slopes.

When I was new to skiing, Bromley, Vermont charged $5 for a ticket and Stratton was $8. Then Stratton went to $10 and everyone was outraged. But that was before snowmaking and high-speed lifts. Almost every ski area has gone through a major transformation since then.

Just this summer, Mount Snow increased its snowmaking by adding more than 150 fan guns to the arsenal of 101 the mountain already had. The entire Carinthia area at Mount Snow has been turned into a massive terrain park. Killington, Vermont put in a new gondola to Skye Peak as part of an $8.4 million improvement project. Okemo cut two new steep trails and added 80 new snowmaking guns. Stowe installed a new gondola connecting Mount Mansfield and Spruce Peak.

I scoped out just a few ways to save on lift tickets. (These are only a few; there are lots more.) Berkshire East has family nights on Saturdays from January 5th to early March. Families can ski for $39 for two, $49 for three and four for $59.

And there are crossover deals. When you buy a $229 season pass at Butternut ski area, you can bring it to Okemo, Vermont and they'll give you a full-day lift ticket for half price during any non-holiday midweek all winter long. In addition it saves you $15 on a Saturday, Sunday or holiday full-day lift ticket.

Killington offers savings with the Express Card. It costs $24 and is linked to your credit card. You bypass the ticket windows because they scan your card at the lifts and your credit card is charged a discount rate. It's $20 off Sunday through Friday, $10 off early and late seasons as well as Saturdays and holidays.

Remember: you don't need to go to one of the biggest mountains or glitziest resorts to have a great day. We had one of the best days you can ever have at Berkshire East last New Year's Day. The snow was coming straight down with no wind, and was over our boots. Visibility was low but the trees lining the trails guided the way. I said to my friends, "Look around. This could be anywhere!" It was true.