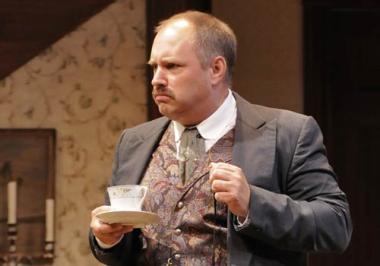 When I interviewed Van Farrier late last year for a two-part Advocate article about professional actors living in the Valley ("Pioneer Valley Stage: Local Pros," Jan. 1 and "Going Pro: Plusses and Pitfalls of the Equity Life," Jan. 8, 2009), he was performing in It's a Wonderful Life at the Majestic Theater and rehearsing for its next show, while working full-time as head of the drama program at Southwick-Tolland Regional High School—a job he loved, and excelled at, as fully as being on stage.

The ravenous cancer that killed him barely two months later, just shy of his 50th birthday, stunned all of us in the theater community. Not Van, we thought. Not that huge heart, generous spirit and inspiring talent.

In mid-February, Van's spouse of 20 years, David Wolgin, set up a blog at CarePages.com to keep their circle of friends and family updated on his progress. What David later said he expected would comprise a few dozen visitors grew to embrace an online community of over 500.

As I read David's eloquent, heartbroken posts, I recalled some of Van's many memorable performances on Valley stages. A crafty, put-upon Roman slave. An amiable lunatic who thinks he's Teddy Roosevelt, charging with bugle and cutlass up the sitting-room staircase. A childlike giant in Of Mice and Men. A stuffy college dean dealing ineptly with racist incidents on campus. A bubbly retarded man in The Boys Next Door, squealing "Oh boy!" at the sight of a donut. A hapless actor-wannabe in Inspecting Carol (my review reported that Van had "the evening's highest laughs-per-minute ratio"). Fifteen varied roles in It's a Wonderful Life.

The Majestic's Danny Eaton related an incident during Of Mice and Men, the first show Van did there. At the end of an intensely emotional scene, Van rushed offstage in floods of real tears, took a minute to compose himself, then turned to the director and said, "I do comedy too, you know."

Sam Rush of New Century Theatre recalled "an actor who strived every minute to be better at what he did on stage … totally serious about his craft, but immensely playful about how he approached a role." He also recounted a backstage moment that spoke to Van's gentleness and utter lack of actor's ego. After a particularly frustrating rehearsal, Van walked into the dressing room and announced, "I am that close to being difficult."

Van's Southwick colleague Janet Grunwald parsed his full name: "Van—a vehicle, which transformed itself again and again" into fully realized characters. "Joseph—the visionary, the interpreter of dreams. … Farrier, a blacksmith, using all the tools at his disposal—strength and gentleness, seriousness and humor—helping us to run in pursuit of [our own] dreams."

Justin Fuller, a former student Van encouraged to go into theater professionally, said, "He didn't just take me under his wing. He gave me my own wings."

Everyone who addressed that packed house touched on the man's generosity of spirit, wacky spontaneity, gift for friendship and, of course, his prodigious talents as actor, director and teacher. And at the invitation of one of the speakers, Van's final audience—friends, fans, colleagues, students, family—gave him a standing ovation."