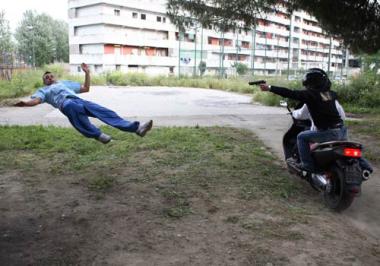 In Gomorrah, the only thing biblical is the violence. Matteo Garrone's highly anticipated film adaptation of Roberto Saviano's book about the Camorra—the organized crime families of Naples—is unflinching in its portrayal of the threats, violence, and killings that make the syndicate the powerhouse that it is.

After opening with a Tarantino-like bloodbath, Gomorrah gets into the nuts and bolts of what keeps the Camorra ticking. There are the expected rackets like waste disposal and drug running, but also the notion that the organization has its hand in producing some high-end fashions (if there were ever a racket, this is it). The illicit gains are used to help support the network of families that pledge allegiance to the crime lords, with small sums trickling down to them via Don Ciro, the money-runner who visits them in the dingy apartment complex the syndicate treats as a stronghold.

Not everyone is happy with the arrangement; one retiree constantly hectors Ciro for more money, and a rival faction is beginning to marshal its forces to challenge the dominant clan. It's hard to see what they're fighting for, beyond the bragging rights of power: there is no Godfather-style grandeur here, only a series of dilapidated buildings and an endless supply of dirty tank tops.

For some, like waifish teenager Toto, that's enough. Seduced by the promise of power, he signs on for a war that will pit him against his best friend. Others, like the unstable teens Marco and Piselli, decide to strike out on their own—not, the film makes clear, a good idea. In Gomorrah's most iconic scene, the pair, who ironically draw inspiration from the American-style glitz of Scarface, stand stripped to their Speedos, firing stolen machine guns across an empty stretch of water, roaring impotently.

As the film travels back and forth between its many stories, it at times loses focus, a weakness likely exacerbated by the input of no fewer than six credited screenwriters. Viewers familiar with Saviano's book will be on surer ground; for most, keeping track of who's on which side and why might be a challenge. But Garrone's style—clean, with an almost documentary-like focus—keeps the onscreen action riveting, and his warts-and-all portrayal of the criminal class is clear eyed and committed.

In brief: Two Lovers, the fourth film from writer/director James Gray, is an unassuming film that leaves a surprisingly big impact. Joaquin Phoenix stars as Leonard Kraditor, a 30-something Brooklynite living at home after a failed engagement and subsequent suicide attempt. Into his life stumble Michelle (Gwyneth Paltrow) and Sandra (Vinessa Shaw), the first an unattainable, troubled beauty, the second the gentle daughter of a family friend. The essential problem: Sandra loves Leonard, Leonard loves Michelle, and Michelle only loves herself.

Phoenix gives the best performance I've seen him give, making the unbalanced Leonard alternately heartbreaking and infuriating as he reinvents himself and flat out lies to become what others want him to be. It's not malicious; he just wants, too desperately, to belong somewhere and be happy, only to find himself wondering if he should be, or could be, happier somewhere else. Accompanied by a soft and melancholic score, the tangled threads of Leonard's life slowly unravel, building to a marvelous ending that is, depending on how you read it, either grossly appalling or brimming with tender mercies.

The Pioneer Valley Jewish Film Festival wraps up its three-week run this Sunday, and the presenters have saved some of their best films for the grand finale, including a close-up look at homosexuality in Orthodox Judaism, a story about the lasting effect of the Holocaust on one young man's life, and a 1937 Yiddish-language film that captures the era's clash of tradition and modernity.

Trembling Before G-d starts things off on Thursday night at Hampshire College's Franklin Patterson Hall. A powerful, personal film directed by Sandi Simcha DuBowski, the 2001 documentary pulls apart the seeming paradox of being both an Orthodox Jew and gay or lesbian in a religious tradition whose main text seems to forcefully prohibit homosexuality. As he explores that struggle, DuBowski touches on a range of stories: men and women abandoned by their families; the world's first openly gay Orthodox rabbi; a high-school age lesbian couple; and married Hasidic Jews who remain in the closet.

Many of the gay and lesbian Jews DuBowski met during the production refused to appear on camera; others chose to appear only in silhouette, or with their images digitally altered, for fear of being ostracized or worse—a sure sign that the issue is much larger than most would imagine. To help viewers understand the scope and weight of the struggle, the film is accompanied by a talk given by Gabriel Blau, founder of The God and Sexuality Conference and author of Two Truths: Living as a Religious Gay Jew.

Also on Thursday, Amherst College hosts the 2007 drama And Along Come Tourists, a coming of age story that runs headlong into Holocaust history. Sven is a young German who signs up to complete his civil service requirements abroad, only to find himself sent to Auschwitz, where he's stuck working at a hostel near the former concentration camp. With no real connection to the generation that fought the war, Auschwitz, to Sven, is an abstraction, a tidbit of high-school history. It's not a view shared by the locals—including an elderly man who was a prisoner at the camp, and Ania, the young tour guide who awakens something in Sven—or the crowds of tourists that descend on the area, creating a cottage industry out of a terrible history. As he discovers what it means to live with that stain, Sven slowly comes to realize the necessity of remembrance.

Co-sponsored by the Amherst College Department of German and the Office of the Jewish Religious Advisor, the screening is paired with a talk by Christian Rogowski, professor of German at the college.

The festival draws to a close on Sunday with a screening of The Vow, a '30s-era bit of black and white treasure. Made in the shadow of the impending Holocaust, the film captures daily life in the Jewish shtetls just as their destruction was being plotted. The title refers to a marriage pact made by two fathers who pledge their newborn children—Rachel and Mendel—to each other. After Rachel's father dies, the pair meet and fall in love without knowing of the pact their fathers made. Newly restored with English subtitles, The Vow is not going to shake up Hollywood any time soon, but as a piece of history, it's a wonderful find.