Memorial Day in Plainfield: Up with a Twist 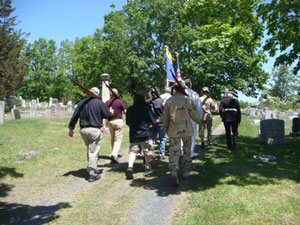 There’s a difference between dying and passing away, between burying and saying goodbye, between the harsh realities of life in the eighteenth century and the comparative ease, for most of us in the United States, of life in the twenty-first. We are quite far removed from the back side, the ugly side, the material side of life. We eat, but we don’t see slaughter. And we don’t miss it, either.

Some vestiges of the real remain. When we bury someone here in Plainfield, we follow a well-worn routine. We walk behind the hearse from the church up the hill to the graveyard. There, the parade splits: the people go straight into the middle aisle; the hearse takes a right and then drives around, along the double stone wall, to meet us at the grave. Then our ceremony rushes back into the 21st century. The coffin–often containing but an urn–is placed atop a contraption covered in fake grass cloth. Words are said and we wander away, never witnessing the lowering of the box into the grave. Ashes to ashes, perhaps, but no dust to dust.

Following the hearse on foot, trekking up the hill to pay respects to someone in our midst who has died, sums up the essence of community to me: I have walked behind a coffin or three, and when I die, some of the people with me now will walk behind my hearse. In this church, you don’t have to be a believer in any particular faith to be buried: it is the Plainfield Church. A forgotten concept.

But I digress. What I mean to say is that it cuts to the bone, this enactment of the ties that bind us: the implicit promise is that we will be there to walk each other’s hearse to the grave. And it carries the sobering reminder that not only will we all die, but that, except for a few of us, we only matter in relation to each other, in the grand scheme of things.

And this, then, is also the Memorial Day Parade: a stylized reenactment of the burial procession – the walk from the church to the cemetery behind the figurative hearse of the war dead, followed by the three-volley salute of the military funeral. 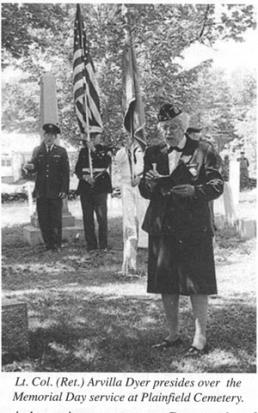 For many years, the parade was led by Lieutenant-Colonel Arvilla L. Dyer, Grand Dame of Plainfield With Many Offices and Functions: Plainfield Town Clerk; President of the Plainfield Cemetery Association, Editor of the Plainfield Post, Commander of Cummington Post # 304 of the American Legion; officer of the Massachusetts Grange; graduate of Hallock Memorial School in Plainfield and Amherst High School; member of the What Nots; President and Founding Member of the Plainfield Historical Society, to name just a handful. On your average Memorial Day, Colonel Dyer led 5 parades and ceremonies in her pumps and with her booming voice, culminating in, though not ending with, the “forward … Harch” that starts the Plainfield parade, following a free ham and bean “dinner” at the Town Hall for the band, members of the parade, and all of the Town (the Grange cheerfully passing the Hat).

We regular folks would eat the dinner, make our donation, giggle at the teenagers of the Mohawk Trail Band (on their third of fourth gig that day, and hungry), and then hurry up North Union, hats on head, arms in long sleeves, bug spray in hand, to beat the parade to the cemetery. Of course we’d get there with time to spare to visit, splayed on the stone wall, reveling in the smell of deet overpowered by lilac.

Soon, around the corner came Colonel Dyer at the head of a very ragtag-looking army: veterans in their many different uniforms, most looking rather drab as army grunts are wont to – greenish, grunge-ish– straight from the sets of M*A*S*H* or Taxi Driver. Arvilla read from the original, Grand Army of the Republic Memorial Day Ceremony and invited descendants of Civil War veterans North and South to decorate the Monument with lilacs (Arvilla insisted on lilacs for the coffin that slowly passes), and read the list of Plainfield’s fallen in all wars.

Until 2004. For we have now followed Arvilla’s coffin up the hill and the world is no longer the same. The Plainfield Historical Society has taken on the task of putting on the dinner, even though there is no longer a band to feed. The ceremony is more about now and less about then– and the words have been debated in this town with its many Democrats. And, somehow, the effect of the whole thing has lessened. It seems to have become a formality– a tradition preserved for the sake of tradition alone. Taps on tape. No more hesitant and often discordant 12-year-old trumpet from afar.

This year, ranking officer Sergeant Bernie Forgea led the parade and ceremony, commanded the small army of Cummington Post # 304 vets that made up of Color Guard and saluting gunmen, some of whom were not in uniform at all. Arvilla must, Bernie remarked cheerfully, have had something to do with the weather, for it was perfect, and a light breeze had blown away blackflies and mosquitoes alike. We laughed and brushed away a secret tear. Still and all, we whispered amongst ourselves like children who found out about Santa, some of the magic was gone.

And then I noticed new faces among the veterans, new faces in crisp uniforms. All these years, it had seemed 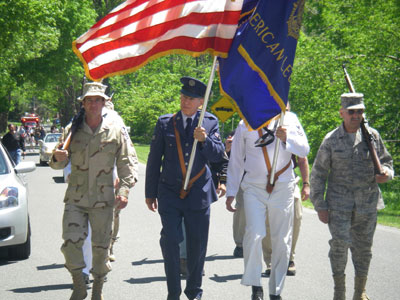 vaguely silly for the vets to even put on uniforms once middle age had settled around the waist: ill-fitting, they were ill-suited. And now, there were a some among them who were on the good side of that divide; men who wore uniforms strikingly in contrast to Bernie’s elaborate World War I style Marine Corps Dress Uniform. Desert men they seemed to me to be: all sand and grey and brown– suited to fight in sand and rock and, in a new version of the Army drab, the new Army Combat Uniform: well-camouflaged for dusty urban or desert warfare.

Memorial Day up with a twist. Here. Now. Real. Dust to Dust, after all. Though George Bush tried to hide the cofffins of the women and men who died OCONUS (outside the continental US), this reenactment suddenly made real what had been hidden: we-are-fighting-two-wars. We have new uniforms to deal with the situations those wars offer. One for Desert Storm, one for Iraq, and one for the dusty concrete of Everywheresville.

It was a chilling experience on an otherwise perfect day. I felt as if, for once, I’d seen the coffin go into the ground.

Newspaper photo of Arvilla L. Dyer: Reprinted from Rebecca W. Mlynarczyk, The Plainfield Project: A Community Caring for One of Its Own (Plainfield, 2005),p. 23.