Water Power to the People of Holyoke

The following essay was written by Charlie Lotspeich, Park Supervisor at Holyoke Heritage State Park, who will be presenting on this topic next Monday at the Mass History Conference on energy and social change, being held at Worcester's College of Holy Cross.

Where is a good place to make the stuff that people want to buy? You might ask this as a citizen concerned about the economic and social health of our country. Industrialists put a lot of stock in answers to this question.

The city of Holyoke was founded on a superb location for offering cheap and abundant waterpower in the days before other more mobile means of power eroded that advantage. A few years ago the city took full control of the dam and waterpower canals that tap New England’s largest river. The city offers inexpensive, clean and secure hydroelectric energy to its residents and businesses. Many of us who now live and/or work in Holyoke see encouraging glimmers of revitalization, as this energy resource adds to the community’s appeal and reduces the difficulties brought on by the collapse of manufacturing in the 1960s. 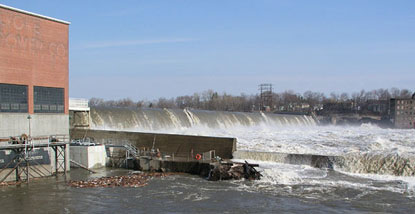 In the 1840s the Boston Associates emerged from their ventures in Lowell and recognized the tremendous potential for building another water-powered industrial city beside the Connecticut River's Hadley Falls. They organized as the Hadley Falls Company and backed an 1847 plan for a dam at the falls and three levels of waterpower canals. The design took advantage of the sloping terrain and the river’s sixty-foot drop in elevation, half at the falls and half in the rapids along the bending mile of river downstream.

The first attempt at a dam ended in collapse immediately upon completion. But in 1849 the developers and immigrant Irish laborers finished a stronger wooden dam, thirty feet tall and stretching a thousand feet across the river. As shown in the photo from the 1890s, it held back the water during construction of the stone dam, which is not about to wash away. 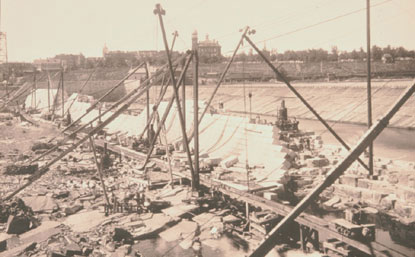 By the mid-1850s the first mile of canals spawned several cotton mills, a machine shop and – contrary to the planners’ preference for textile milling – Parsons Paper Company, the last paper firm to cease production in 2004. As mills went up the canal system grew by 1883 to four and one-half miles, its planned and current extent. 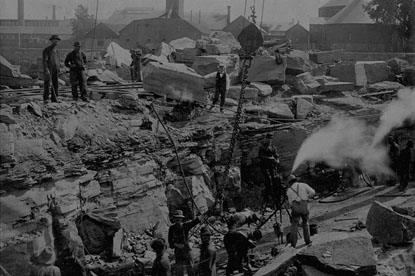 The Holyoke Water Power Company envisioned and promoted the city’s growth. It reported in 1853 that the river’s drop of sixty feet and its flow even in the driest season would provide five hundred fifty mill powers or roughly thirty thousand horsepower, “doubtless more than sufficient to maintain a hundred separate establishments of average size.” The actual population swelled past 4,600 in 1855 and peaked at 65,000 in the early 1920s. Since that decade, when capital and jobs began to flee New England in earnest, Holyoke’s population has steadily dropped to about 40,000 today.

Holyoke’s waterpower was the cheapest in the region and almost negligible as a cost of production. It spurred the city’s growth as long as other costs, particularly transportation and labor, stayed low. Textile companies could alternate between good rail connections to the ports of Boston or New York. Manufacturers of rag paper used raw material from the textile industry and rags collected in the streets, and did not depend on locally scarce pulpwood. As the biggest papermaking city in the world, Holyoke hung on long into the market shift toward pulp paper. Company owners fended off unionization. Skilled paperworkers organized early, but lower-paid textile workers feared losing their jobs and largely avoided unions prior to the New Deal. 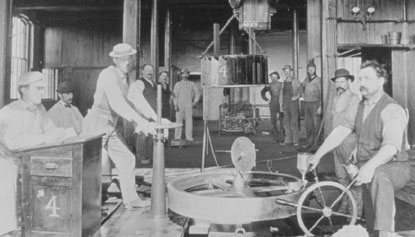 Holyoke’s diversified industrial base and prominence in hydraulic technology protected it against weaknesses in any single market. The Holyoke Water Power Company enticed William Skinner to move his silk operation to Holyoke in 1874 after the collapse of the dam serving his mill in nearby Haydenville. The inventor John McCormick moved to Holyoke to design turbines, and local machine shops sold all the turbines they could produce. Studies at the testing flume, shown here, enabled turbines to accurately measure factories’ water usage and helped to boost turbine efficiency from the 1882 high of 84% to 94% fifty years later.

The development of hydroelectric power and transmission lines undermined Holyoke’s ability to attract companies. The Water Power Company built the first hydroelectric power plant in 1884. In 1902 Holyoke Gas and Electric took over those services and now operates its own grid and most of the hydroelectric units throughout the system, including the station in the old testing flume building (see the photo below) and the two large turbines at the dam. But industry slipped away from waterpower sites, drawn in part by the availability of steam, electricity and then cheap oil in the mid-twentieth century. We shall see what happens to globalization if economic recovery pushes up oil prices and the cost of moving goods around the world. 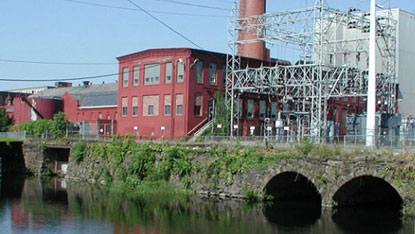