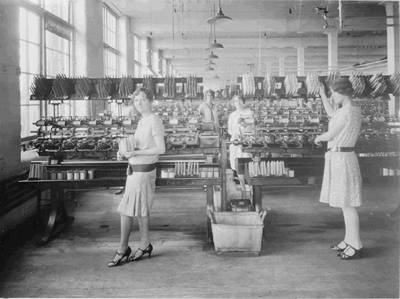 The City of Holyoke is famous for fine paper manufacturing, but its planners hoped it would be a textile boomtown. As Charlie Lotspeich has pointed out in the previous post, Holyoke’s diversified industrial base flourished due to the technological innovation of water power. William Skinner’s move to Holyoke in 1874 was fortuitous for both Skinner and Holyoke. With an unlimited source of power and inexpensive immigrant labor available in Holyoke, the manufacturing business grew and profits increased.

In the 1840s, the English textile industry was in a depression and textile workers flooded into America for work. The United States, however, had few if any skilled workers in the silk industry and needed skilled dyers, weavers, mechanics and machinists. William Skinner, born in England in 1824, apprenticed under his father as a silk dyer in England. In 1843, Skinner became part of the wave of skilled immigrants to come over to America. William came to New England rather than staying in New Jersey, where he landed when first reaching America.

Skinner arrived in Northampton, MA, on e of the few areas with an established silk industry. Skinner immediately got a job in the Valentine Dye Works. In 1848, Valentine’s business failed and Skinner went into business for himself in a dye-house adjoining the Conant Silk Mills. Just a year later, Warner, Holland and Company took over the J. Conant & Company.

This partnership between Warner and Skinner was successful but Skinner decided to go out on his own and in 1853 Skinner obtained larger quarters, erecting a larger plant at what was later to be known as Skinnerville. In 1854 he began making silk twists in addition to the original line of sewing silks. In 1857, to make way for a steadily expanding trade, he built a three-story mill, which he called the Unquomonk Silk Mills. Skinner’s large silk mill that employed about 80 people, and several tenement houses nearby. His employees and their families lived in these.

The Mill River Dam, which had supplied water power for many mills along its path, gave way in 1874. The ensuing flood destroyed Skinner’s mill and over 140 people lost their lives in the flood.

He was a man who had built a large fortune from the shop floor and who had lost almost everything. Teetering on financial ruin, William Skinner was eager to rebuild, but without amassing a large debt. Luckily, Holyoke was attempting to build an industrial base and offered Skinner a deal he couldn’t refuse, a prime canal site rent free for five years in which to rebuild his mill and a portion of this plot for his house for one dollar. Since most of the house had survived the flood, Skinner had it dismantled and reconstructed in Holyoke. 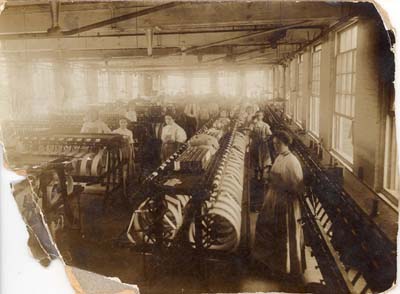 Within six months, he was again producing sewing silk and silk braid used for binding men’s suits and service uniforms. Skinner was up and producing sewing silk, machine twist, braids and woven goods. In 1883, the company became William Skinner and Sons, as William and Joseph took over leadership of the firm. The company that William Skinner created became the largest producer of satin linings in the world. Company products were bought in all parts of the world. “Skinner’s Satins” were known wherever silks were used. Large sales and distribution forces were located in New York, Boston, Philadelphia, and Chicago.

William Skinner remained at the head of the firm until his death in 1902. His sons William C. Skinner and Joseph Skinner took over running the business.

Skinner Manufacturing created brand loyalty by imprinting the company name into the selvage and launched a national advertising campaign. “Look for the Name in the Selvage” was a trademark used well into the twentieth century. Over the years of operation in Holyoke, the company manufactured an array of fabrics from their earliest origins of silk, cotton backed satin, and pure dye taffetas to washable crepes, rayon, and Tackle Twill. Most popular among their later lines of Skinner materials was their bridal satin remembered today by many brides of the 1940s and 1950s. Silk and silk satin were the earliest fabrics and the mainstay of the business for 87 years.

In 1961 the Skinner family sold the business, with all their trademarks and patents, to Indian Head Mills who closed the mills shortly after. The mill buildings were destroyed in a fire in 1980.