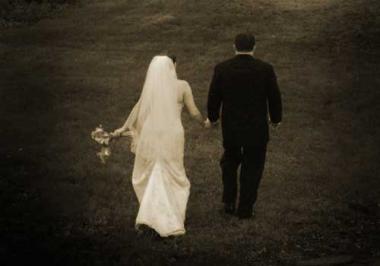 The critical difference photographer Andrea Burns observes between first and second weddings is in the couple marrying. "Second weddings seem to be less about fantasy and more rooted in realism," she says. "People often seem really comfortable with one another." She recalls a wedding she photographed, the second for both spouses. Burns says, "Each person had children from the first marriage and I wondered whether they'd want photos with their children separately. They'd done the work of blending their family really well, and they all seemed so close with each other. The siblings—full or step—all looked so similar it was as if they'd always been related. I couldn't even keep track of whose were whose."

Margaret Bullitt-Jonas, Priest Associate of Grace Church in Amherst, watches for responsible completion of the first marriage during premarital counseling. She says, "It's important that a person has dealt with the loss experienced by the end of the first marriage. The loss may feel different depending upon whether the marriage ended due to death or divorce. If there's still a lot of rage, I see that as a red flag. Nothing's black and white."

Shades of gray are sometimes more easily grasped the second time around. Tom Weiner reflects that his father, who objected to Weiner's marrying outside the Jewish faith, mellowed between Weiner's first and second weddings: "By the second marriage, my father realized it was better to be supportive than begrudging, and he welcomed Susan."

Weiner says that although each ceremony was different—the first a brief formality with a justice of the peace, the second with a long program—he loved both weddings, including the festivities that followed. "The first wedding was a big potluck," he recalls. "The second was catered."

Josh Wolk, too, had a big second wedding, mainly because it was the first for his bride, Lauren. Wolk says, "My inclination might have been to do it small and quiet, while for her it was her first and (we believe) only wedding, so she wanted the whole nine yards." Wolk's first wife—the two had a daughter together—attended the second wedding. He knew some people were uncomfortable with that choice, and explains, "My philosophy is that the whole idea of a 'failed' marriage is ridiculous. My marriage to Michele was not a failure in any way. Without it I wouldn't be the person I am now, wouldn't be capable of the kind of relating I can do with Lauren, and wouldn't be the man Lauren loves. It was an important, even necessary, step in my development and I celebrate it for those reasons."

Not all second weddings are large. Wedding planner Lisa Watts of Cold Spring Events notes, "If it's not long after the first wedding, people might not want to invite the same people again. But if it's people who are remarrying later in life, then most guests' memories of the first wedding aren't a concern and they can go big again."

Alan Wolf took doing something different to extremes. Having done the "big poufy dress wedding" the first time around, Wolf planned something "radically different" for his second wedding, which took place soon enough after his first that he imagined people would be comparing the two.

"Megan didn't care about a big wedding, although she'd never been married," Wolf explains. "Her sister had just done one. While we joked about not getting married, we wanted kids (Adelaide is one, and a sibling's on the way) and we wanted to be married before that." So Wolf planned a vacation for the couple in Costa Rica. A few days into the trip, he proposed on a beach at sunrise. Wolf says, "I suggested we get breakfast at a particular hotel, where, much to her surprise, we found her sister and brother-in-law, who are our best friends. I'd arranged for a judge to marry us on the beach in the next town. We all spent a few great days together—the wedding portion of our trip—before Megan and I left for a spa. The trip—pre-engagement through honeymoon—lasted about two weeks. We were both thrilled about it."

Lisa Watts observes that second weddings tend to be "generally one hundred percent about the couple." She ventures, "With fewer formalities, like the bouquet toss, the event can be much more relaxed. This doesn't necessarily mean people spend less money on second weddings. When people are older and well established, they can afford to go big or spend more. And they do."

Jeff Waggenheim says that his first wedding was an "amazing event" and so was his second. "I knew, from the first wedding, how every detail could be attended to and made meaningful, so I felt prepared to have a second great wedding," he says. "It was Sarah's first wedding and I wanted for it to be completely special for her."

The couple's ceremony took place by a pond on her parents' farm in New York State. Although the day itself was a somber one—October 7, 2001, when the U.S. bombed Afghanistan—guests kept that news from the bride and groom, who'd been in lower Manhattan looking at wedding rings on 9/11. And although the weather wasn't picture perfect—with hail, cold, and wind—Waggenheim said the natural elements added to the day. His wife is a musician, and friends played music for the processional while she rode up by tractor.

Waggenheim's good friend served as best man and poet, writing an epithalamium (wedding poem) for the occasion. A twice excommunicated nun turned Protestant minister was the celebrant. For Waggenheim, that attention to detail—from the Spanish wine to honor her time living in Spain to Red Stripe beer from one of his favorite places, Jamaica, to the play list they created for the reception—paid off. He says, "We were set up by her aunt and my father and the program includes the first emails we sent one another arranging to meet."

If Waggenheim had one regret from his first wedding, it was that he hadn't had enough time to visit with all the guests. So the second wedding's weekend-long celebration included a barbecue. He recalls, "I had a handful of overlaps who came to both weddings (which were about a dozen years apart), and they all said the two weddings couldn't have been more different from one another and that they were two of the best weddings they'd ever been to."

In contrast, Robin Black let go of many details for her second wedding. She says, "While I felt so strongly at the first wedding that I wanted no religion, Richard cared deeply that both his childhood rabbi and the rabbi who married his parents officiate. And I was happy to make him happy."

Black's romance began soon after she separated from her first husband, and was much more of a whirlwind—the couple married less than two years after meeting—than she'd anticipated. "I thought I'd be a single mom for a long time," she recalls, adding, "What anyone knows the second time around is that marriage is a leap of faith, no matter how much you love the person."