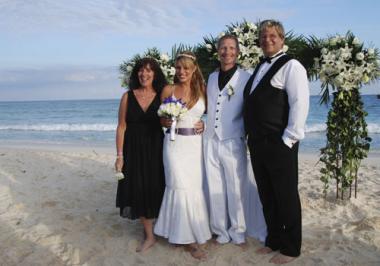 Any couple planning a large wedding, from ceremony to flowers to guest list to cake, considers the idea—by then you might call it fantasy—of elopement. Lots of couples eschew the large wedding altogether (or, at least, turn it on its head) and go small. Sometimes they go very small, even tiny. Karen and Brian Alstadt traveled to a justice of the peace who had married friends of theirs in Vermont. She says, "Our dog was our witness. We got home and found our neighbors had left flowers for us by the door. The whole thing was lovely." Weeks later, they had a bigger ceremony and reception, but the first remains their official—cherished—anniversary.

JM Sorrell became a justice of the peace when the Massachusetts Supreme Judicial Court declared same-sex marriage legal. She has done about four hundred weddings since that 2004 ruling, and says about half of them have been "pretty tiny." While it was same-sex marriage that propelled her into this line of work, she has married many heterosexual couples as well. "There is, for some couples, much more freedom to speak more personally during a small ceremony than they would feel able to do in front of a crowd," she says.

Sorrell finds that the societal expectations for heterosexual couples, especially heterosexual women, aren't so deeply rooted in same-sex couples' psyches. "Lesbians aren't oriented from childhood toward that 'big day' mentality,' she remarks. "Often they decide to do something small and are surprised to learn that their parents are disappointed not to be included. …Recently I was asked by two women to perform their ceremony in Massachusetts, just for the two of them. The couple lives out of state. Their plan was to have an intimate ceremony and then to throw a celebratory party. Their parents were unhappy at the idea of not being included, so the women brought both sets of parents along. I think the same-sex couples marrying are often surprised by how much their wedding ceremonies mean to their families."

Lee Badgett, economics professor and author of When Gay People Get Married, concurs with Sorrel's sense that many same-sex couples don't go into marriage envisioning the wedding itself as a "big deal." She tells of one longtime couple in Amsterdam who were very pleased to have gotten married on their boat one morning. One of the women was totally surprised that her happy news caused her father consternation. He wasn't upset that she'd gotten married; he was upset that she hadn't included him in the event. In that misunderstanding, the difference of scale between their perceptions of a wedding was revealed.

Not only same-sex couples choose extremely small ceremonies. Sometimes tiny proceeds from necessity. Mia Abel and her husband discovered a legal loophole involving immigration that they hadn't known about and were advised that given the couple's existing commitment—living together with pets and with every intention of staying together—they should marry before governmental regulations changed and potentially compromised his legal status.

When Abel and her intended went to get their license, the drabness of the government building depressed her. She says, "I called my parents to tell them about the sad building. They called back and said where they lived a quick wedding could be easily arranged. Would I consider getting married at their house that Saturday? I said yes!" Abel bought a "pretty dress" and headed to her parents' house where a old family friend (and justice of the peace) married the couple in her parents' sunroom. She says, "It was just us, my folks, my brother and sister-in-law, and the friend and his wife. My mom had gotten me some irises, my favorite flower." The wedding party went out to dinner to celebrate the occasion. She reflects that it was a simple and special event—and imagines throwing a big party for their ten-year anniversary.

Oona Coy's and Ben James' wedding ceremony was decidedly tiny. The couple gathered three close friends and headed out onto a snowy field on the winter solstice. One friend performed the ceremony and then the small group ate lamb stew—this was on the property of a farm school where Coy was working—and danced.

Coy muses, "Probably the predominant reason we chose this route was that I was so caught up in the idea and stress of a wedding and Ben really wanted us to take that away from our marriage decision. He wanted the wedding to be about us connecting with each other and not about worrying who to invite or what to wear." Months later, the couple did hold a second, more public event complete with ceremony and reception. She admits, "There was some familial strife in between those two events."

Steven Sauter's second wedding was very small. He says, "Sally and I were a bit embarrassed that at age 26 we were both on a second marriage. We thought having the four parents was enough." Theirs was a memorable ceremony, but not because it was so romantic or intimate. He recalls, "The evening came and we assembled in the courtyard of the little private school were Sally was teaching in Portland, Maine. Before the JP could utter the few sentences, we were set upon by millions of mosquitoes. In no time our white shirts were spattered in blood. Sally and I started laughing but the JP pressed on, swatting himself and spreading more and more blood over his tie, shirt, jacket and neck and face. It was a battle zone!" He adds, "Thirty years later we are still laughing at the blood ritual that bound us together."

As owner of Flower Hill Farm, Carol Duke has had many weddings at her bed and breakfast (she's worked on many more, as a flower designer). The smallest? "A few years ago, a couple came to get married, bringing her daughter and her parents," she recalls. "The couple comes back each year for their anniversary." Duke reflects on smaller weddings: "I like how the couple has time to enjoy each guest. When people get married here—it's rustic and the landscape seems to become part of the wedding—I think they are choosing a quieter kind of experience."

Just as elaborate planning is necessary for big weddings, the tiny wedding or elopement often comes with its own set of concerns. Will people be peeved about missing your big day? How do you choose whom to include if the list is to remain teeny-tiny?"

Postscript: While I was in the middle of researching this story, an email arrived in my inbox with this subject line: What We Did On Our 17th Anniversary. Guess what my cousin did? She married her partner (Vermont residents, they'd done the Civil Union years back) in a hot air balloon. They brought along their two kids, and her partner's—I mean wife's—sister (who married them under an obscure Vermont law that allows anyone to obtain the one-time right to marry a couple) and her partner. Pictures were attached of the happy couple grinning ear-to-ear, lace "veils" peeking out from under their warm hats. It was impossible not to smile—and tear up—gazing at their beaming faces.