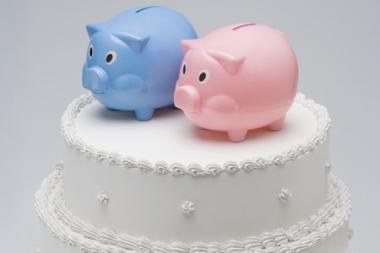 While couples today may not forget old-new-borrowed-blue or other traditions associated with weddings, it’s safe to say the “new norm” does not require marching down the aisle to “Here Comes the Bride” or serving wedding cake. More people feel free to make their weddings their own unique event, often by making choices—small or large—to reflect themselves, rather than some generic cake-topper bride and groom.

Take Lynn B. Johnson: she set Han Solo and Leia atop her wedding cake.

Fern Spierer, through her DJ business Firefly Entertainment, has witnessed this shift in recent years. She says, “There are no more ‘supposed to’ traditions. Brides ask, ‘Do I have to dance with my father?’ The answer really is that you don’t, unless you want to. [Couples] are so relieved to create a wedding that honors their preferences. The trend is to personalize weddings so that they reflect the couple’s style.”

Examples of how people make weddings their own often start with the ceremony. Spierer says, “Many people are not so invested in the best man and maid of honor. Often, if they have a wedding party at all, they invite the people who matter most to them to participate in the ceremony, regardless of convention. One groom had his sisters as the wedding party—no best man, in fact no men at all. This past summer, another man nabbed his father to serve as best man. He explained to the guests, ‘My dad is the best man I know.’ There were tears.”

For a first dance with his mother, that groom requested Mississippi John Hurt’s “You Are My Sunshine.” “He said his mother used to sing that song to him when he was a child,” Spierer says. “More tears.” She observes, “When you make a wedding speak to who you are, the memories you create are that much more personal.”

For the ceremony itself, some people employ elements of tradition, rather than adopt traditions wholesale. Jay Ansill says he had a minister friend—”I forget what denomination”—perform the ceremony. Ansill adds, “We did break a glass as a nod to my family’s tradition. It wasn’t a Jewish ceremony by a long shot!”

Sasha Nyary had a “Quaker-style” wedding officiated by an employee of the Ethical Culture Society in Brooklyn, where the wedding took place. “At some point,” Nyary recalls, “this woman said, ‘I’m the one making this official.’ And then she made some really lovely comments about us.”

Interfaith ceremonies tweak traditions to accommodate more than one. Carlen Arnett describes their interfaith wedding as “giving its nod” to her and her husband’s families because both a rabbi and her family’s minister performed the ceremony together. (“Was it ever hard to find one in 1984 in the North Shore Chicago suburbs!” she remarks.) “Together,” she adds, “they married us outside under a giant, sixty-plus- year-old weeping willow tree which served both as living chuppah and memorial to the grandparents who couldn’t be there (my grandmother had planted the tree when my mother was a child).”

Sujata Konowitz’s wedding was a twofer: Hindu ceremony first, followed by a Jewish ceremony after sundown on a Saturday. “Hindu ceremonies usually last days,” she explains; “we whittled ours down to a very meaningful hour. Then we changed clothes and stood under a handmade chuppah for a ceremony that was supposed to last fifteen minutes. The rabbi decided he wanted equal time and went on for another hour!”

Beyond substance, people do play with style. Some eschew white bridal gowns. Carolyn Hastings recalls that her daughter, Caroline, then pregnant, opted to save money, so she and the bridesmaids all wore long blue dresses. Hastings recalls her daughter informing someone: “You’ll know the bride—she is the one who’s pregnant.” Recent bride Kait Handler and her bridesmaids all donned yellow high heels. Not to be outdone, the groom and groomsmen sported yellow high-top sneakers.

A quartet played at Gina-Louise Sciarra’s and Bill Scher’s ceremony. She says, “Bill walked down the aisle to Joe Jackson’s ‘Is She Really Going Out With Him?’ and I walked down to ‘Imagine.’ The Jackson was particularly subtle and only the very cool got it.”

Jennifer and Matt Fellows waited until the end of their ceremony to play with tradition. She recalls, “We skipped back down the aisle. We were so happy and it was so much fun. Everyone laughed and they still talk about our exit.”

The other thing Spierer notices is an increased emphasis on throwing a party that’s fun. She says, “Rather than feel you have to serve a particular meal or hold a particular type of reception, people are throwing a party they really want to have. I did one wedding this year that was an afternoon games party. The setting was a simple country house and the place looked beautiful and there was great food. What wasn’t there: alcohol or posed photos. Instead there were great candid photos. In other words, they had the party they wanted and of course, that made for a better party.”

Then there’s the issue of The Cake. No longer required, says Spierer, is the big wedding cake, or the ceremonial cutting of said big cake. “No one really likes cake all that much,” she observes.

There are plenty of other choices, Spierer says: “One couple, from Brooklyn, had cheesecake, because what could be more Brooklyn?” Rebecca Steinitz concurs, recalling, “We had chocolate cheesecake decorated with strawberries.” Valerie Gintis and Bill Sweet also served cheesecake.

Lauren Yaffee attended a wedding with a candy bar recently. “There were jars and jars of candy with scoops and baggies for take-home, like you might think of for a bar/bat mitzvah or the candy shop in Charlie and the Chocolate Factory,” she says. And don’t count out pie. Stacia Potter’s wedding featured what she calls a “pie buffet.” Spierer did a wedding where guests brought many pies. She said, “There was one cake, for the ceremonial cutting. All those pies, though, they looked beautiful all laid out, and people got the dessert they wanted.”

Plenty of people still have cake, with the ceremony of cutting and feeding each other a bite—and still play with tradition. “We decorated with pink and gold origami cranes. We had an origami bride and groom on top,” says Jay Ansill, “although they looked more like a gangster and a nun!”

“My wife and I got married in the lobby of Ben and Jerry’s,” Dorfman explains. (Dorfman worked there at the time.) “An email invitation was sent out to all employees the morning of the wedding, which ended with ‘P.S. This is not a joke.'” About an hour before the ceremony, Dorfman rented a tux with a Mickey Mouse vest and bow tie. He recalls, “My wife wore a gray suit with a floral bouquet in the colors of the Norwegian flag. Ben and Jerry stood up for me, Jerry wearing a rubber tie and Ben wearing a rubber cone head. The ceremony took about three minutes. There was no processional, no bouquet toss, and no relatives. We invited the justice of the peace to stay for the ice cream cake afterwards, but he had to get back to milk the cows. All in all a typical Vermont wedding, I suppose.”