Behind the Beat: Dom Introduce Themselves 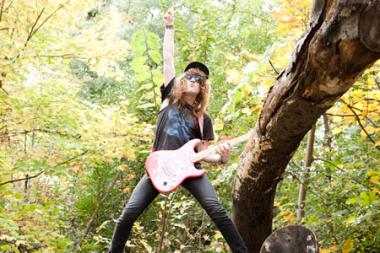 It’s hard to separate fact from fiction with Dom, both the man and the band of the same name, but a few things are true for sure. The man and band—Dom on vocals, guitars, and keys; Bobby K. on drums; Cosmo on guitar; and Erik on bass and guitar—recently relocated to Hadley from Worcester, are currently getting a ton of press, and are hell-bent on taking over the world.

As for the dubious, there’s the apocryphal story that the young rocker is so in fear of debt collectors that he withholds his surname from interviewers and press agents. He also claims that his mother dropped him off at an orphanage at the age of eight (while keeping his other siblings) because things “just didn’t click” between them. He’s stated that the American Hockey League’s Worcester Sharks adopted an anthem about his cat Bochica as their theme song during hockey games.

The third claim is demonstrably false. As to the other statements and many more like them: who knows?

For a band that formed this past January, Dom have stirred up a maelstrom of press, landing features on bellwethers like Pitchfork and Brooklyn Vegan. They’ve also signed a deal to release their debut EP, Sun Bronzed Greek Gods, this spring on Virgin/EMI label Astralwerks, home at one time or another to artists like Beta Band, Brian Eno, Hot Chip, and Phoenix.

“Bobby and I met in December, and were gonna make electronic music ’til I wrote the song ‘Jesus,'” says Dom (the man). “Then we added Erik and started a band instead.”

Good thing they did. Songs like “Burn Bridges,” “Living in America,” and the aforementioned “Jesus” are rocking, poppy and irreverent all at once, buoyed by hooky synths and lilting, layered vocals.

Dom describes his music as “apopcalyptic fuzz” inspired by The Ventures, crappy keyboards, and the 2004 Lindsay Lohan vehicle Mean Girls.

“I write the songs, Bobby makes the beats, Erik adds rhythm, and Cosmo shreds,” he says.

The band are currently working on their next EP, and head into the studio this winter.

So why the migration from Worcester, a city Dom has described as a “utopia,” to the gentle farmlands of Hadley?

“Well,” Dom says, “after signing our first few record deals, we moved up to a high tax bracket and we’ve all wanted to explore the Pioneer Valley, so it just made sense to move the band out to Hadley.”

Dom ends his interview with an invitation to each and every one of our readers.

“Advocate readers should know that Dom band is the new band in town,” says Dom. “We got the B43 bus stop on lock. Come play. Drink the beer with us sometime.””

For songs, shows, and more info, visit any one of Dom’s social networking outlets: facebook.com/dom, myspace.com/dom, and twitter.com/domband.