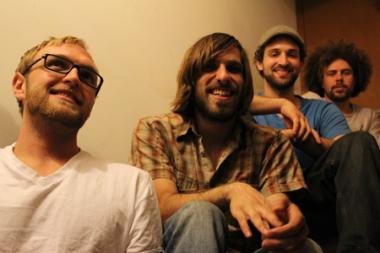 As alluded to in a previous installment, your friendly neighborhood Nightcrawler participated in a back-to-back Brit fest in Northampton Jan. 22—catching an early set of Beatlemania Again at the Academy of Music, then high-tailing it over to The Calvin for the duration of Get The Led Out: the American Led Zeppelin Show.

Seated in the comfy confines of the former, it seemed only a matter of minutes before “Sir Paul McCartney” put into words what most seemed to be thinking.

“I have to tell you, we’ve played a lot of halls,” he proclaimed in his best Brit, “but this place is absolutely beautiful.”

In fact, the theater backdrop, balconies and curtains almost created the illusion that we were being treated to a command Beatles performance at the Royal Albert Hall as the band breezed through Ed Sullivan-era selections using authentic Rickenbacker guitars and Vox amps.

As the set ended, the Crawler and company decided to ramble on over to the Zep show, but not before reflecting upon the Fab faux experience we had just witnessed.

“I don’t know, man. Everything was perfect, and I’m a Beatles fan, but I wasn’t blown away,” my travelling partner for the evening said.

“Yeah, but you have to remember they are doing this chronologically, so we just got all the cutesy ‘She Loves You Yeah Yeah Hold Your Hand’ stuff,” I offered. “So my guess is, if they kept up that level of precision and proceeded on into Sgt. Pepper/Revolver territory, your mind would be sufficiently blown, I’d bet.”

Another friend who stayed for the entire performance would later confirm my suspicion, and on the way out, box office manager Jessica Abbate’s face was beaming almost as brightly as her bedazzling Beatles T-shirt.

“Isn’t this great? We need to spread the word, we’re not just a moviehouse!” she declared.

Over at the Zeppelin show that was already happening, the Crawler had barely shaken off the cold in The Calvin’s foyer when it occurred to him that the song he was hearing not only remained—and sounded—exactly like the records he wore out in his youth, but that it would be physically impossible for four people to be playing this particular track from Physical Graffiti (“Ten Years Gone”) with all the guitar lines going on.

This was a dilemma easily solved, of course, as, upon entering the theater proper, it was plain to see that Get The Led Out is a six-man operation. Thing is… well, it looks like the singer is going to address it now.

“I know what you’re thinking,” frontman Paul Sinclair called out. “This is a Led Zeppelin tribute, but the singer looks like Joey Ramone.”

(The Crawler was actually thinking Howard Stern, but, yeah… he could see Joey, too.)

The man with the eerily powerful Robert Plant howl went on to explain that it’s all about the music for them, and as the band with roots back to Philly barreled through the evening of classic Zep hits and chestnuts ranging from “Heartbreaker” and “Babe I’m Gonna’ Leave You” to the lilting “Going To California” and a spot on “The Rover,” it was clear that all involved had the chops to do what was needed.

But perhaps even more impressive than the caliber of musicianship was the sheer selflessness this band possesses. Quite simply, there are no egos in Get The Led Out, and everyone knows their roles. So, for example, if you were to assume the role of second guitar in “Your Time Is Gonna Come” and your lines didn’t start until three minutes, 35 seconds into the song, you would wait patiently off stage until that point, slip in to nail your part, then fade back behind the curtain. No need to be on stage the whole time doubling guitar parts or strumming superfluous rhythm chords. Just in and out on guitars, vox and keys all night, as needed, executed to perfection.