This time of year I head down to the basement at least twice a day to check on my onions or other seedlings. This evening, I was greeted by a peculiar smell. I sniffed and stepped, then stepped again. I thought, “that smell is very familiar.” Not exactly pleasant, but not entirely nasty either. It smelled, well, it smelled like pot. Though I often joke about the grow lights in my basement, there is not nor has there ever been anything illegal growing down there since I moved in. But, well yes that’s how it smelled.

My basement is damp, dark, and has walls made of large stones: it looks like a dungeon. Well this evening it didn’t smell like a dungeon, it smelled like a dorm room.

As I started the laundry and checked the onions I kept looking about thinking maybe some teenager was hiding out in my basement with his doobie, or whatever they call it these days.

On my way up the stairs I had a realization.

My basement smells like a skunk, not like pot. Oops. That’s embarassing. Not too embarassing to pulish on a blog mind you, but embarassing. This no doubt explains Grendel’s (the younger and fatter cat) interest in the basement. It also probably explains the little hole I found along the wall. Oh joy! What could be better than skunks in the basement? Skunks on the first floor I suppose. Let’s hope that’s not foreshadowing.

This, as I’m sure you’ve noticed is supposed to be a gardening blog. So about those onions. I planted them on Sunday. Here’s a picture I took two nights ago: 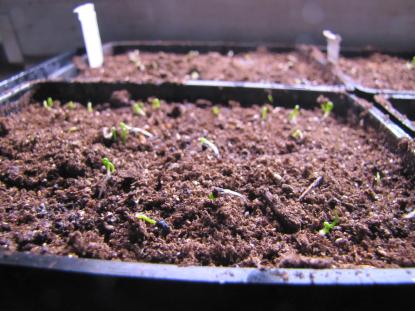 Aren’t they the sweetest? Monocots — one cotyledon — that is one leaf coming out of the ground.

Onions for some reason always seem more precious to me than other seedlings. They looks so weak and small and yet they’re cold hardy and thrive. Last year I actually spent some time pulling the seed husks off of seedlings that didn’t look like they were going to make it. Crazy man. I can just imagine somebody with 10 acres of onions walking along pulling the seed husks off of all the sorry looking ones.

So that’s the first thing growing in my corner of the world, and I’m keeping it in the dungeon, with my skunk. I do hope there’s only one.

The snow is starting to melt in my yard and I see some strawberries and spinach that has overwintered. Oh boy.

Another sign of spring: on my ride home from “the lab” the other day I saw this: 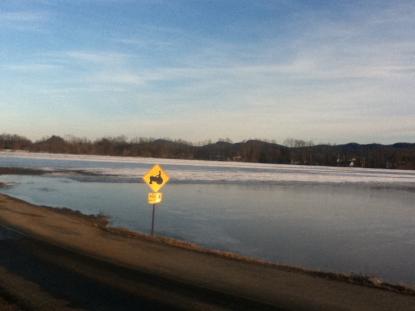 Probably not ready to till yet.