I am no fan of big business and I certainly would like to see our country go in the direction of sustainable agriculture. At the same time, I’m not as rabidly against genetically modified crops as many in our not-exactly-humble valley. It’s partly the fact that I work in a branch of science that relies on transgenics to answer questions, but it’s also because I just tend to be a contrarian. Most folks I talk to are staunchly opposed to transgenic crops, so I tend to want to play the devil’s advocate. When we’re talking about Monsanto, the choice of words is rather apropos.

Recently, a judge overturned a 2007 ruling curtailing the use of roundup-ready alfalfa until a more complete review could be undertaken. Last month, the hold was removed (for a report by an actual journalist: http://www.npr.org/templates/story/story.php?storyId=133284749). Now farmers are going to be allowed to grow genetically modified (GM) alfalfa wherever they like. I’d like to take a minute to describe how exactly round-up ready plants work, how they’re made, why some farmers like them and why the organic community is up in arms.

Though very few of us actually eat alfalfa, or Medicago sativa, it is used widely as a forage for animals we do eat. It’s a perennial, which means it doens’t need to be planted each year. This is a nice big bonus, but it also is linked to why there could be a weed problem — more on that later. Alfalfa is also a legume. Legumes form symbiotic relationships with bacteria in root nodules. These bacteria convert nitrogen in the air into a more usable form for the plant. This is called “nitrogen fixation.” So far, all to the good.

Why would someone want to stick some nasty ol’ gene in this pretty little plant? 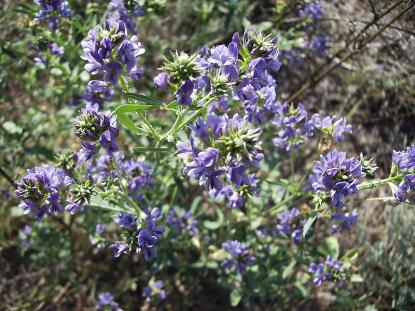 I mentioned that alfalfa is a perennial. It grows in large fields that many farmers would like to believe are monocultures. They’re not of course because lots of other plants move in if there’s no tillage or other kind of weed suppression. Every try to weed a meadow? I actually have when I worked for a prairie restoration company in Texas. It’s not pretty. In any case, many farmers would like to be able to spray an herbicide on their alfalfa so that they know they’re only growing the nutritious little herb all cows love.

Round-up is also known as glyphosate. It is a chemical that inhibits an enzyme in plant chloroplasts. Chloroplasts are organelles in plants that turn light into sugar. This little feat is what makes life possible for the rest of us. Chloroplasts also make certain amino acids for the plant. Round-up puts the kybosh on one of those enzymes.

Monsanto developed a gene (actually they found it in another organism then slightly modified it) that could still make those amino acids. That way the plant’s chloroplasts can chug along unbothered by the round-up. They “introduced” these genes into the alfalfa (and corn, wheat, soy, cotton etc etc.) plants. And voila, round-up ready alfalfa. Many people get pretty hung up on this step. The genes are introduced in lots of ways, but the most common is by using a bacterium called Agrobacterium tumefaciens, or Agro as we in the biz like to call it. In nature Agro inserts genes into lots of plants in order to turn them into food making factories. In the lab, Agro’s own genes have been removed and have been replaced with Monsanto’s favorite gene (or yours). Agro then happily puts this in the plant for you.

It is no exageration to say that Agro has been doing genetic modification for millions of years.

Of course, the genes agro puts in in nature are only in somatic cells and so cannot be passed on (that is not in eggs or pollen). When monsanto does this they usually do it not on a whole plant but on a bunch of cells growing in a petri dish. They ensure that every cell of the plant carries these genes — including the pollen.

The proponents of organic foods are against allowing unrestricted GM alfalfa planting for several reasons. Basically because alfalfa is bee pollinated and bees fly for miles, the genes in the GM alfalfa will be carried to non-GM alfalfa growing within several miles. The seeds from this alfalfa will then be “contaminated.” That is they will contain a copy of the round-up ready gene. This is bad, some say, because consumers will not know whether the “organic” alfalfa fed to cows and other livestock is in fact organic. For summaries of these positions: http://eatdrinkbetter.com/2011/02/01/michael-pollan-and-others-sign-organic-unity-statement-against-monsantos-ge-alfalfa/. Fair enough.

The proponents of GM alfalfa claim that they shouldn’t have their right to grow a plant that has not been shown to be dangerous/different restricted. Also fair enough.

I think that the threat of GM food has been largely overblown. The single protein in round-up ready plants that is different from other cultivated varieties is not going to make people sick. There are only a few amino-acids different in the protein. There are much greater differences between tomato varieties in your garden.

However, I believe people have a right to eat what they want and know what they’re eating. I think farmers should have a right to grow the crops they want, unless their decision affects others. And there is the rub. Because cross-pollination by bees is virtually assured. Farmers who grow this crop, especially for seed will necessarily impinge on other farmers’ and eaters’ rights. The very modest buffer zones around GM crops that are generally required are fine for some wind-pollinated crops, but they will be undaunting to bees. For these reasons, I think this decision should be reversed, luckily the center for food safety is going to keep trying:
http://truefoodnow.org/2011/01/27/usda-decision-on-ge-alfalfa-leaves-door-open-for-contamination-rise-of-superweeds/