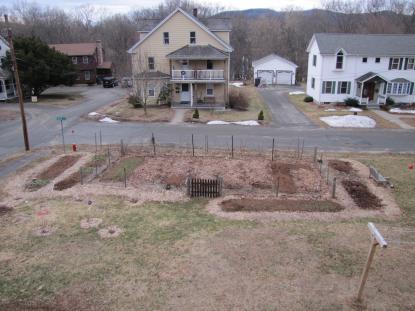 People who don’t eat their vegetables are only fooling themselves. Animals can’t do the magic. They can’t take CO2 and turn it into sugar. The magic of taking an inorganic gas and turning it into an organic nutrient didn’t make it into the animal kingdom. Even worse we can’t make lots of the amino acids — the plants have got to do it for us. You may not eat your vegetables, but something else did and they probably didn’t do as good a job as you could. So you’re not getting all the nutrients. The cow or chicken or rabbit is. Perhaps that’s why they’re so tasty.

My children have some fussy eating issues. I accept responsibility for this entirely — as a five year old I spent an entire year in Japan and ate nothing but rice.

I would like to list my elder child’s diet: peanut butter and honey sandwiches, hot dogs, any crap that comes in a shiny wrapper. I’m exaggerating a bit.

Oddly, both children will eat vegetables in the garden. Vegetables become non-kosher in the eyes of both the 3 and 6 year old as soon as they pass into the house. To whit a three shot montage of the youngest eating spinach from the garden this week. It is really a shame I didn’t get his orange boots in the shot. They were on the wrong feet. 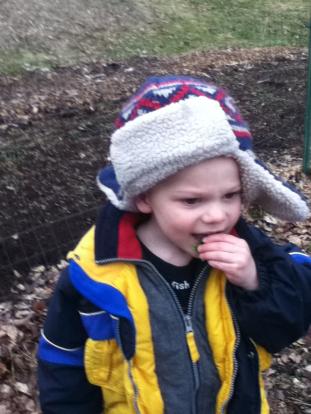 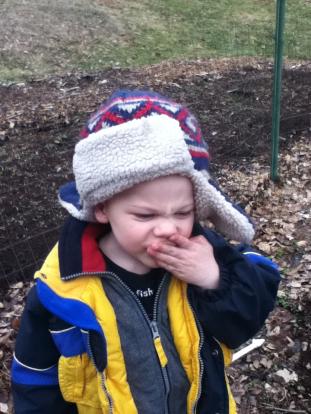 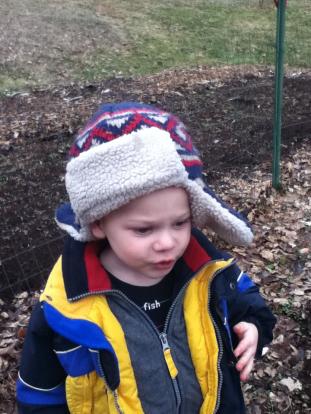 When asked what he thought of the spinach: “it’s good.” Unequivocal just the way I like ’em.

During the summer I sometimes find myself doing a little on-the-fly buffet for the two of them (and occassional guests) before dinner standing in the garden. They get green beans, peppers, carrots (with dirt), tomatoes. Elliot will eat onions and garlic raw.

With that as segue I have some pictures of what’s coming up. First the aforementioned spinach. What joy, it made it through the winter under the snow and is now growing like gangbusters. As this is the first close up picture of my garden, I’m rather happy that I planted in those nice rows. In case it is not entirely obvious, I like four foot wide beds and I plant my rows perpendicular to the long axis. That way I can easily walk down the row weeding and can reach across when necessary. 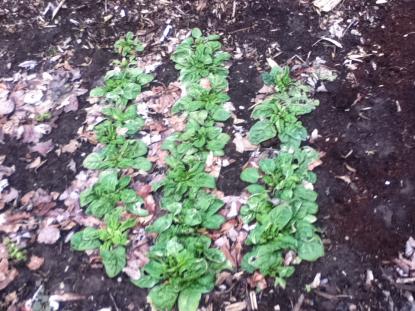 I’d like to mention that freshly slaughtered spinach is much more delicious. Once it stops screaming, it’s missing something.

The other surprise I got a few days ago is the garlic peeked out of the heavy leaf mulch. 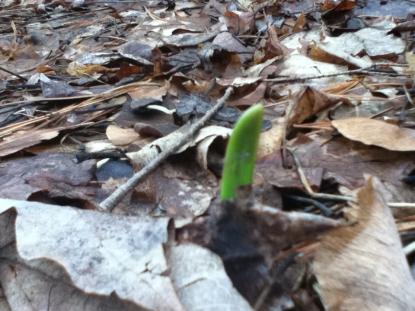 Last year I tried both pine needles and deciduous leaves on my garlic bed. I split it half and half as a sort of poorly controlled experiment. In my soil chemistry class back in the last century I was told that pine needles, contrary to popular belief, will not make the soil acidic. Instead, what is true is that as the deciduous leaves rot they tend to buffer the soil slightly. Pine needles do not, so the soil continues to become acidic. Some research shows that the story is not quite as clear (A comparison of landscape mulches: chemical, allelopathic and decomposition properties Duryea et al Journal of arboriculture 1999). In fact these authors suggest that pine “straw” has allelopathic properties (in this case inhibiting germination). Who knew?

I did not expect a difference, but whoa! The garlic under the needles didn’t germinate as early and didn’t grow well at all. I eventually replaced the needles and the garlic recovered. Not really well controlled science, but I won’t be using pine needles again.

This weekend I have a week’s worth of work to do:
plant more onions
put in a new garden bed
cut the hole in the chicken coop for a door
finish spreading the compost
plant some more spinach/lettuce outside
prune the raspberries
taste my second batch of cider

Hope I make it.