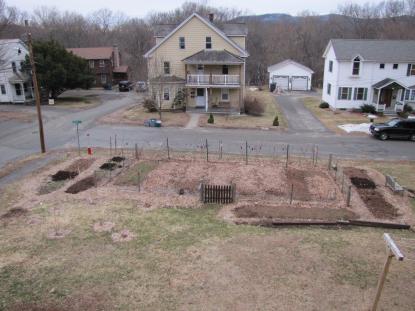 I didn’t know them personally, so this is hearsay, but when the first westerners arrived on these shores (oddly coming from the east) they saw untrammeled wilderness. They were misinformed. According to William Cronon in Changes in the Land, it was actually a semi-tended forest (semi-trammeled I suppose). The local Americans managed the forests and meadows for hunting and gathering. But it looked like a wilderness. And wilderness was to be tamed and owned. The Americans didn’t feel the same way about the place they lived and sharing didn’t work out so well.

The attitude towards the wilderness has a evolved a bit. For a long time wilderness was something to be feared and exploited. It was inhabited by scary critters, but it’s also where wood and food came from (oh yeah, and gold). Newly cleared forest often makes great farmland. So they cleared a lot of it. We have more forest in New England now than we did 100 years ago.

Here’s a comparison of forest cover in Petersham, MA in 1830 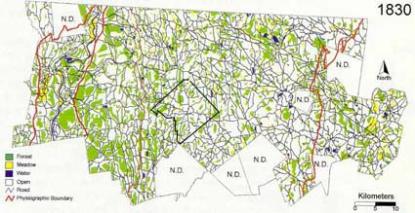 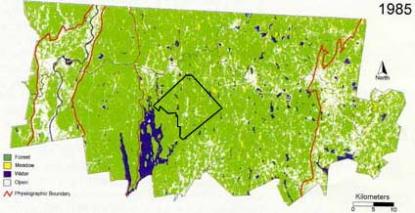 And here is a summary of the data for MA as a whole from the seventeenth century to the middle of the last. 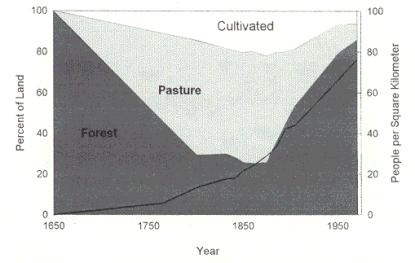 Source:http://www.foresthistory.org/education/Curriculum/index.html
By the by, an excellent educational website.
As wilderness became scarce it assumed a different aspect for the city/suburb dwellers of these United States: it became a prized place to be preserved and kept apart. A much more nuanced version of this is presented by Roderick Nash in Wilderness and the American Mind.
In the above graph, the upward trend in forest round about 1860 also coincided with westward movement of farming.

I’m writing about this because when I finally got back into the garden this weekend I got to thinking about what I mean when I garden. I stand astride these two concepts of nature in my town garden: wild and tamed. I want wild nature: worms (I know they’re non-native), humus, sun, ladybugs, and rain. I also want to extract things from nature. I most assuredly am not preserving a wild spot, but I am making a yard into something at least a little productive. My style of gardening is unnatural. Permaculturalists strive for something different, but that’s a subject for another post.

Though an un-managed forest may seem chaotic, it is not. Of course those first westerners couldn’t see this; they just knew they weren’t in the old world anymore where firewood was a luxury. An ecosystem is a place at dynamic equilibrium; with the inputs supplied by sun and atmosphere it will continue indefinitely. Of course it will constantly change, but as a living network. A garden is far from equilibrium. It may achieve a steady state, but it will require constant energy from me to keep it there.

One of this weekend’s tasks was to effect a transformation on the raspberry patch. I have three varieties of raspberries: golden, red and purple. I bought six locally and I got the rest from a neighbor. You are never supposed to do that because raspberries are notorious for harboring disease. I did it anyway because I am a scoff law and like living life on the edge of the fast-lane. They were also free.

Raspberries must be trellised and pruned and disciplined if you wish them to live to their full potential. That is, the potential that you wish to impose on them. This is not at all what they would wish. Brambles in a meadow in the northeast will eventually get crowded out by trees, but in the mean time they produce lots of fruit and give space to all sorts of creepy crawlies. I want mine to grow in a row. I want the producing canes to stand up straight for picking and so as not to sharde the new canes. I want the new canes to come in below.

In my current garden space the raspberries have been winning. Notice useless trellis system: 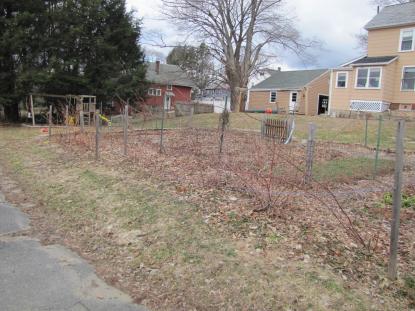 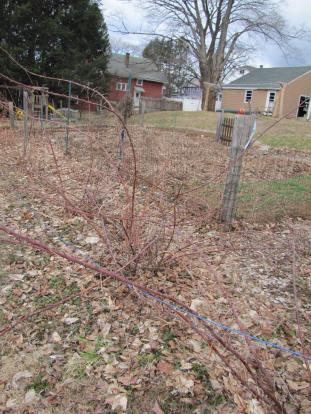 So my new technique: I have strung a pair of coated wires about nine inches apart four feet off the ground and tied the canes I decided to keep to this. I used an old shirt to make the ties. Hopefully this will work. I got the idea from looking at the way Nourse farms does their raspberries. 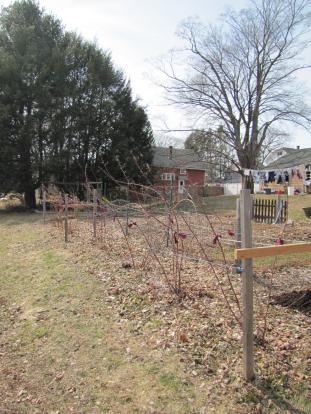 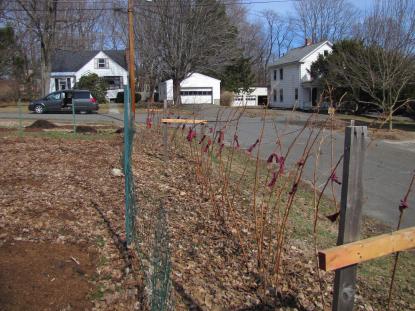 As to which canes to prune, I am something of a heretic. Briefly, there are two types of raspberries: summer bearing and fall bearing. Summer bearing make fruit on last years’ canes whereas fall bearing make fruit on this years’ canes. For summer bearing you should prune out the two year old canes and any weak canes. This should leave about three to five per row foot. Most books recommend pruning out all the fall bearing canes and letting them start over each year. I have found that if I just prune the fall bearing berries back to 3-5 strong canes then cut the tips off of last year’s canes along with the long side shoots, they’ll give me a summer flush of berries. This is not good practice for the large scale farm, but seems to work for me.

On the pruning, I cut the canes almost at ground level so they don’t make weak shoots. 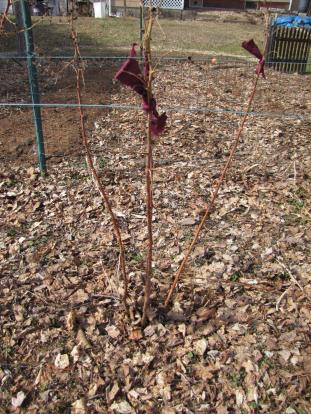 I pruned out a lot of the brambles – this will keep disease down and keep the raspberries growing where I want them to grow. Hopefully we’ll be able to harvest from both sides of the trellis this year.

Of course none of this work allows a single raspberry to make it into the house. During the season Elliot and Isaac zoom down there as soon as we get home from school.

The garden exposes the kids to nature, but not to wilderness. We have to get out of the yard for that.