A house near me is getting the architectural equivalent of a boob job and botox: vinyl siding. It’s also getting new more efficient windows; that’s probably more like a gym membership. It does look a lot nicer though: it’s all gleamy and has plump lips. It’s gotten me thinking about my own asbestos clad abode. The asbestos was just fine in the ground. Now that someone dug it up, mixed it with concrete and put it on my house, it’s the equivalent of toxic waste. Do I cover it up (the boob job), have it removed (liposuction) or paint it (spanx)? I sure as hell don’t know, but it got me thinking about how often we are tempted to make choices that seem greener, that are actually just wasteful.

Buying a more effecient widget saves energy, but you throw away the old widget.

This struck me powerfully today on my commute. Most days I ride to the Utility Pollen Research Laboratory along the bike path. I join somewhere near the Stop and Shop enterance and finish off after the Swift extension to UMass. Along the way I was confronted by all sorts of formerly important things: 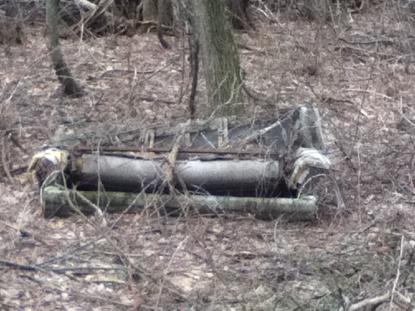 A mouldering couch. Possibly thrown out by a moving college student, or possibly someone who has just upgraded. 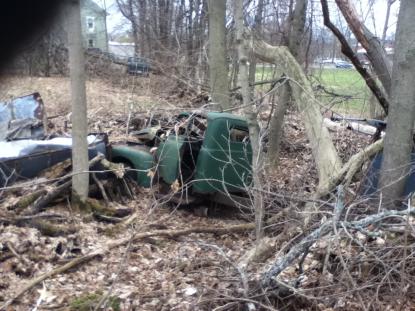 Now that’s one old truck, and it probably wasn’t replaced by a Prius. Plenty of cars are and you have to wonder whether it’s worth it.

Even more stunningly, an entire edifice to store our extra stuff 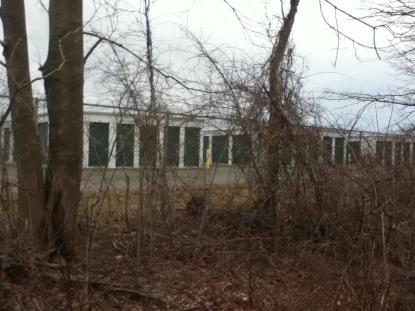 I’ve used storage lockers, and certainly in a college town there’s plenty of call for them, but I wonder how many other countries even have them.

I’m getting off topic here a bit.

The bike path itself is a sort of green retro-fit.

I love riding the paths. I can go from my house through Easthampton to the Southampton border. I can double back and hit route 5 near the train tracks. Going east from my house I can go all the way to Belchertown or north to Leeds. Soon I understand I’ll be able to go to Hatfield and Williamsburg (for more).

I do love these paths, but they were train tracks: 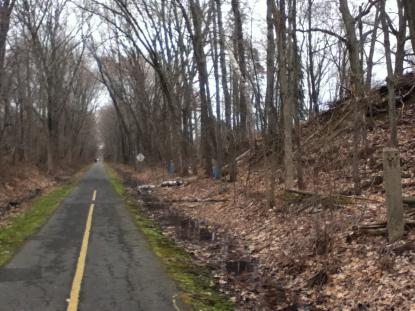 Notice the whistle post on the right. Wouldn’t they be better as railroads still? I love riding the bike paths, but really it would be a hell of a lot more convenient for there to be good bike lanes on the roads. It might not get out the recreational bikers, but it would be good for more transportation riders. This is the oddest type of recycling. Not exactly like the household boob job, but questionable. Now if we want to turn them back into train tracks, we have to rip up bike paths: something I sure don’t want to happen.

We (I) are (am) often tempted to spend to save energy. So often we’re wasting our money and making things worse.