I don’t think people’s passion for orchids can be overstated (c.f. adaptation). I do not collect orchids; in fact I own no orchids, but they do thrill me somewhere outside of the concious mind.

This week’s New Yorker features an article by Jonathan Franzen (sorry behind a pay wall) in which he writes about coming to terms with his friend’s death. His friend was David Foster Wallace (DFW), one of my favorite authors. He relates an incident in which he (Jon) handed DFW a pair of binoculors to see a particularly beautiful bird. DFW was unimpressed. I think orchids have simliarly disparate effects on people. Some are immediately in love and act like cat ladies (collecting every one they can and converting their house to a museum). Others love them from a distance and just like to see them (like birders). Others think: “what are you looking at freak boy.” Sadly, most people who I talk to fall in the third category, whilst I fall in the second. 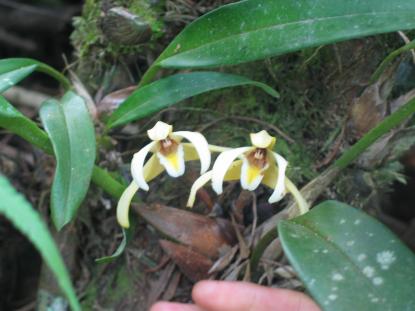 I intended to write this “plant of the week” about Arabidopsis thaliana, perhaps the only plant I despise, but as I wondered through the greenhouse looking for some photogenic “mouse ear cress,” I happened upon an orchid. Good thing, because you’ll look long and hard for a photogenic Arabidopsis plant.

This reminded me that we are entering the blooming period of Massachusetts’ main orchid variety the lady slipper. We have three varieties pink (Cypripedium acaule), yellow (Cypripedium parviflorum) and showy (Cypripedium reginae). They’re not all rare, but coming upon one in the woods in early spring can be really breathtaking.

What is it about these flowers that makes them so awe inspiring? They don’t look like normal flowers: they’re bilaterally symettrical which is a little unusual. One of the petals is usually enlarged to form a landing pad for pollinators. and the female naughty bits are often fused into a single organ.

All of this is about attracting pollinators. As I’ve noted before, plants are kinky. I cannot think of a single plant that engages in straightforward, you know, male and female stuff. Usually somebody else has to get involved. With orchids it’s much more naughty than say the wind (as in corn, Zea mays). Many Ophrys species use sexual mimicry. Not like Ru Paul, but still. In these species, the flower has evolved to look like the female of an individual insect (usually a bee or fly). When the male comes to copulate (doesn’t even buy her a drink!), the pollen is delivered in a big mass so that it will stick to his body. When he flies to the next flower to try to copulate with it, he delivers the pollen then takes that flower’s pollen. So not only is the flower tricking the insect to do the copulating for it, it actually looks like what the fly wants: that’s kinky.

I took this next picture of a orchid that mimics a fly or bee, but can’t remember the specifics. It was a few years ago. Perhaps I was on a bender with Charlie Sheen and don’t remember much, somehow I coaxed him into an orchid garden (eww). 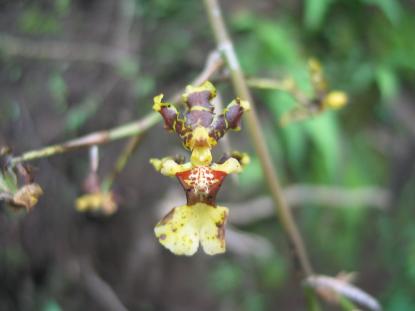 Far less kinky, but more freaky is the Australian underground orchid. This plant never emerges from the ground. It flowers underground relying on ants and the like for fertilization. For food, it is a saprophyte feeding off a fungus which feeds off a myrtle tree. That’s worse than a Paul Ryan budget living off the poor.

There are more mundane versions: some orchids smell like blood or rotting meat to attract vile bugs that like that sort of thing, but that’s pretty pedestrian frankly.

They are all specialists, often for a single bug species.

They’re hard to find. Some grow on the ground like our native species, but many are epiphytes. They grow on trees way up in the forest canopy. Species are discovered when a branch falls off a tree onto a path. I know a guy who found three new species during his junior year abroad in Ecuador.

Here’s a shot in a greenhouse near the Utility Pollen Research Laboratory showing how our Greenhouse Generalisimo simulates epiphytic growth. 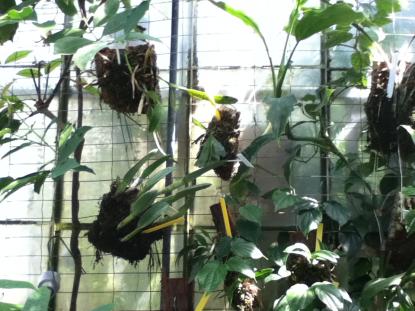 Several years ago before my wife came back from the hospital with a child (twice!), we went to Costa Rica and spent some time at an orchid garden in moneverde. Wow! The first section is devoted to miniature orchids. You’re handed a magnifying glass and off you go. I began pestering the poor gentleman who runs the place with questions as soon as we walked in. To get me to lay off he took us on a tour of the premises. We were entranced and spent a few hours soaking it all in.

If you can’t make it to Costa Rica, all of our local college greenhouses have gorgeous specimens, including some of the ones featured here.