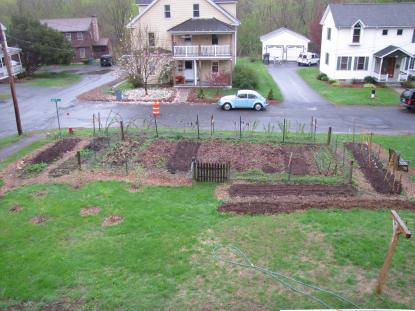 I think the proper botanical clasification is in fact Lycopersicum esculentum. The beloved garden tomato. It goes really well with this other favorite that’s looking good at the moment: garlic.

Last night I finally got around to seeding my tomatoes. The process is pretty much identical to the seeding of onions except that I plant the tomatoes a little deeper and anticipate them a little more.

During the winter months our hardy mailperson delivers several dozen seed catalogs to our door. We receive a catalog that only sells beans and one that only sells tomatoes. This kind of mono-literature really doesn’t work for me. One hundred varities of tomatoes just looks like ketchup.

I prefer the couple of dozen varities in the standard catalogs. As I’ve mentioned before, I have a preference for Johnnyseeds.com. The catalog has lots of information on growing each plant. I keep it around as a quick reference throughout the gardening season. The pictures are voluptuos, but they don’t make any of those cheap shots with the little kid posing with a largish tomato to make it seem even larger.

Even though Johnny’s does a pretty good job of limiting the tomato selection, there are still far too many to choose. I’ve had some negative experiences and these have conditioned mean to avoid new girl, early girl and pretty much anything in that line. Sort of like the way girls always avoided me in high school. I also avoid the “beef” lines, I think that’s because I don’t really like the image — tomato = beef = blood.

That barely limits me at all so I break it down into types. I like a few indeterminates. These are plants that will just keep growing until they get diseased or too cold. If you prune them to grow on a stake they will steadily produce tomatoes sequentially. I like a few determinate plum tomatoes for sauce. I get a few varieties because sauce is so important in my eating life. They also freeze well adn the determinates tend to make all of their tomatoes in one big flush and can be caged and left unpruned. I get one cherry tomato because kids and neighbors love them. Finally I always buy a few weird heirlooms because I like funny colors as much as the next guy.

Tomato seeds last for several years so I can also go on planting a variety from a previous year if it did well. However, some varieties are fairly expensive. For instance, the Favorita cherry tomatoes I got last year only came with 10 seeds. They were great, but I used all the seeds.

A quick note on nomenclature. “F1” means that the tomato is a hybrid. That is two distinct genetic lineages were combined to make this tomato. If you save the seeds they will not grow up like the parent plant — they may be better, worse, or gross. Most plants in seed catalogs are F1 hybrids and often have important traits that have been breed in this way (usually disease resistance). the big exception is the heirlooms. These are usually varieties that can be propagated from the seeds in the fruit.

So what did I choose this year?

Pink Beauty: pretty, pink and indeterminate — like priscilla queen of the desert.

Defiant: determinate and Johnny’s claims it’s resitant to both early and late blight.

Rose: an heirloom that is supposed to be as good as brandywine but doesn’t crack.

San Marzano: I’ve grown this for years for sauce and with the exception of the unpleasantness of 2009, it has produced like crazy.

Monica; Another sauce tomato supposed to have excellent disease resistance.

Eight varieties is kind of ridiculous, but I sure do love tomatoes. I’ll only transplant one each of the indeterminates (or maybe two), but several of the sauce tomatoes. It seems I never have too much trouble giving away the remaining plants.

During the unpleasantness of 2009 I gave a few tomatoes to one of my neighbors and the plants all got the blight. I don’t think she trusts my tomatoes anymore. She also now growls at me.

From my perch in the children’s room I caught this little garden vandal on the zoom lens. I’m using Vandal here to refer to the original Vandals. So far the peas look OK, but he/she was straying awfully close.