The last few weeks have been very rough on the boss’ respiratory system. She is allergic to tree pollen. Many of the trees around here do their reproduction in the spring and a lot of these trees use wind to spread said pollen. That’s all well and fine except that a lot of that pollen doesn’t wind up on stigmas (the first of the female tissues), it winds up in our noses and our lungs.

Based on a few conversations over the last few weeks, I have come to the realization that many people are unaware of all the beautiful flowers hiding in plane site on the trees around us. Maple trees in late April develop a yellow or red aura and people assume these are “buds.” They are in fact flowers and the flowers are busy making baby trees.

This morning I grabbed a couple hundred flowers off a Norway maple and a sugar maple and brought them in to work for a looksy. I’ve included a bunch of pictures below describing where the naughty bits on these flowers are.

I took these pictures using a Leica dissecting microscope with a color digital camera. If you’re actually curious I can tell you more.

First, a Norway Maple flower. I have pulled away the sepals and petals so that mostly what you see here are the anthers with the pollen. They’re curled under at this point.

I removed the anthers and focused on the stigmatic surface. In the next image I’m pointing at it with a dissecting needle.

This is where the pollen lands then germinates. It grows down to the ovule and fertilizes the egg cell to produce the embryonic plant. Based on the orientation of the anthers and the placement of the stigma, I’m guessing that these maples fertilize themselves and don’t contribute to allergies.

Next I zoomed in on the anther to show the pollen sitting there waiting to be released.

I switched to sugar maple and pulled off the petals and sepals to expose the immature anthers — those are the sort of banana looking things bracketing the flower. In the center of the flower is the immature pistil. I’m pointing at it with the dissecting needle. Over the next few slides you can see what happens as the flower matures.

This image shows the fully mature pistil, the stigmas are hanging out in the air and the anthers haven’t matured at all. The female tissue is ready to receive the pollen from another flower carried by the wind.

Once the flower is pollinated, the pistil doesn’t matter any more and will shrivel up and fall off. The anthers grow out and the pollen dehisces everywhere. The picture below shows the anthers after the pollen is gone.

Finally the pollen. I got a few grains onto one prong of the smallest forceps I could find and that’s what’s pictured below. The pollen is pretty small — less than 10 microns. 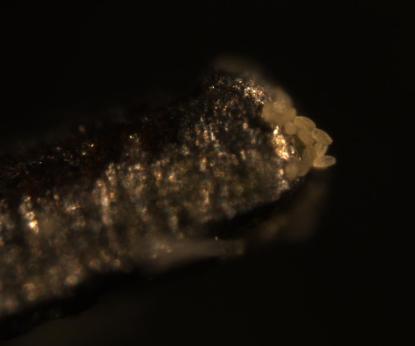 This quick morphological analysis suggests that the Norway maple doesn’t contribute to allergy problems whereas the sugar maple does.