Several yeas ago I spent time commuting along I-90. I hated it for so many reasons, but it did give me time to listen to lots of NPR and to stare at the plants that survived along a highway with all of its attendant smog and salt.

One morning I noted some very odd looking plants. I pulled over, picked one and realized that we had been dissecting a very similar plant in my morphology class. I had found Equisetum arvense. Also called horsetail or scouring rush. Horsetail, because it apparently looks like one (I don’t see the resemblance) and scouring rush because it loads up deposits of silica in its epidermis and can thus be used as sandpaper.

I get it as a weed in my garden now, but here are some shots from my current commute. For this shot I balanced my bike along with a tag-along supporting our two boarders while wielding an i-pod camera — not exactly high quality photography.

Serves the purpose though. You’ve probably seen these guys too.

I’m writing about these plants because they’re real troopers. They take over wastelands and hold down the soil. I also like them because they’ve survived as just fifteen species which define a class, order and family all on their own (Equisetopsida, Equisetales, Equisetaceae, Equisetum). That is they’re pretty different from everything else round these parts (these parts being earth). They’re closest relatives are the ferns and cycads. It is thought that this is the oldest surviving genera. In fact, much of the coal used to generate electricity comes from equisetum trees of the carboniferous period.

When imagining the dense forests the dinosaurs walked through, you would be forgiven for thinking of something like a tropical rainforest or the northwestern temperate rain forests, or the senate (still inhabited by many dinosaurs). But in reality, flowering plants only evolved towards the end of this period and weren’t dominant. Instead you’d be surrounded by huge lycopods, ferns, cycads and, yes, lots of horestails. These days most horsetails are only a meter or so tall, though there are some that grow as tall as 15 meters in the tropics. Back in the day (dinosaur’s day) some were 30 meters tall or more. 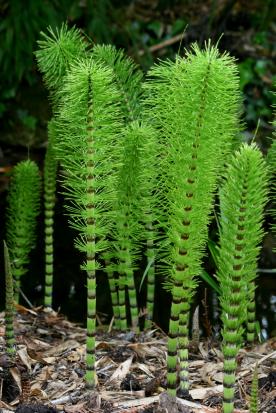 I mentioned flowers and it’s worth pointing out that these plants don’t flower. Instead they grow a strobilus within which spores form through meiosis. These drop to the ground, germinate and grow the reproductive organs (called antheridia and archegonia). These in turn make either sperm or eggs. The sperm are motile so go nowhere until some water allows them to swim to the egg. Once fertilization has been effected, an embryo forms which will grow into one of these plants. As you can imagine this is not a hugely efficient process.

You’ll also no doubt notice something missing. There are no seeds. Seed bearing plants have a huge advantage because the seeds can be dormant under the soil for 100s of years. These horestails can’t do that, they survive as tenacious little rhizoids. The plants you see around you never went through a seed stage since they first emerged as a family 300 million years ago. They propagate easily from even tiny cuttings.

Not only do they lack seeds, they don’t really have leaves anymore. The leaves have been reduced to little flaps sticking off the stem. The stem does all the photosynthesis now.

1. They’re survivors even without seeds.

2. They have motile sperm but no leaves.

3. You can use them for sandpaper.

4. Much of the coal that we use for electricity comes from hosetails.