The trouble with men

Hectic ain’t the half of it. This weekend I planted, mulched, packed, fenced, weeded, tended, and attended a dinner party. I am now, I’m afraid, officially an adult. I seldom use “party” as a verb, and most often it has an adjectival modifier.

I mulched with wild abandon both Saturday and Sunday. There are significant advantages to mulching: it cuts down on weeds and watering and adds nutrients to the soil. There are also significant disadvantages: things like to live in/under it. Things like rodents, slugs, and twittering congressmen. But there’s really nothing cuter then turning over some of last year’s mulch and spotting a little freshmen congressman scampering away with his blackberry.

Everything look neater with a nice layer of mulch. There are definitely many lawmakers who would do much more for our country under a thick layer of mulch.

I have to gather my mulch suruptitiously from other people’s leaf piles. I’ve only gotten scolded once, so I feel I’m winning.

In other news, this weekend we noticed a little problem. I’d like to introduce Moonpie: 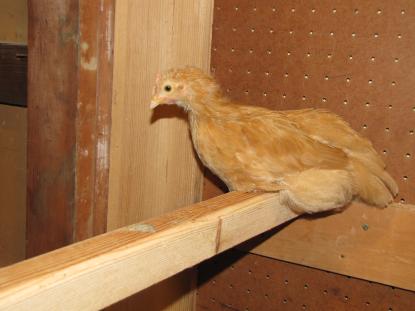 Moonpie is sitting on one of the two roost bars I constructed. This is entirely appropriate as that is where the chickens are supposed to roost. The second roost bar is smaller and lower. It also sports a different population:

A bit crowded ladies? They’re only four weeks old (or so) and they’ve at least tripled in size. I was sold a 25 lb bag of feed and told it should last eight weeks. It lasted just about four. It’s pretty well sealed in a plastic container without holes so I don’t think rodents are eating it.

But what’s with Moonpie?

Well there are some differences here. Notice the comb — red vs. yellow, big vs. small. There are also wattles developing under moonpie’s beak. And, well, HE’s also darker. I’m afraid that’s no pullet. That’s a cockerel. He dominates the flock; he’s got enormous legs (not canckles, just enormous legs); he’s darker. He’s also gotten a bit aggressive with me. He has, in fact, bitten the hand that feeds him. As have my children. My children have in fact bitten more than the hands.

This is Francis in profile. Isn’t she pretty? That’s what you’re supposed to look like Moonpie.

I am reserving judgement until I hear some crowing or see either sickle feathers or pointed saddle feathers. I’m afraid Moonpie is not long for this world.

But what gives? These chicks were supposed to have been all pullets with a 90% accuracy rate. They were vent sexed! For a video please click the following link, but be forewarned that vent sexing ain’t pretty: vent sexing.

I do not really understand why Northampton won’t let me keep a rooster. I assume it’s the noise, but I’m sure there are many louder dogs. Harley Davidson motorized manliness supplementing machines are much noisier indeed and serve no purpose. A rooster serves a real purpose: keep his chicks in line. But I can’t fight city hall.

More importantly it has gotten me to think about the fate of most young male animals on a farm. They castrate some roosters to produce capons – then eat them. Male bovines become veal. Male goats are served as kid goats. Extra male sheep become lamb. Veal from the standard factory farm is indeed a cruel thing, but a young male bovine slaughtered early on was a necessary part of animal husbandry. A farm couldn’t have as many bulls as cows, or as many roosters as hens.

And so Moonpie is almost undoubtedly destined to a shorter life than the others who showed up here at Hampster Acres.

Thus far the children seem fine with this. I have been talking about this possiblity all along, we’ll see how it actually plays out.