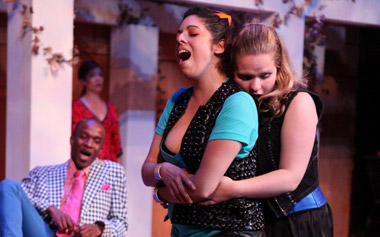 You can bet that when the first Handel opera to be produced in the United States was staged in Northampton in 1928, there wasn’t a shopping cart on stage. Nor is it likely that one singer was costumed in gleaming festoons of cans.

So what do shopping carts, cans diverted from the recycling bin and singers sauntering around the stage barefoot or in punk outfits have to do with the story of a Persian king who could raise an army of two million to fight the Greeks?

The answer lies in the imagination of Eve Summer, director of Handel’s Xerxes, which played at Northampton’s Academy of Music last Saturday evening. Summer’s imagination has a long reach; you see it in the subtitles she writes for the operas she directs—including Cosi fan tutte (2009), also played at the Academy—in which street language pops like firecrackers. Summer has a gift for translating classic symbolism into familiar detail with just enough flippancy to bring out the fun of the opera without skewing the emotional equation. Since Handel himself was criticized for adding elements of comedy to Xerxes, she was on solid ground.

Saturday night’s production continued the relationship between Summer and Ian Watson, the highly respected music director of the Arcadia Players, that produced the sparkling version of Cosi fan tutte. That production inaugurated a new phase in the life of the Valley’s Commonwealth Opera as it moved to transform itself from a community opera to a professional company under the leadership of Summer’s father, opera composer Joseph Summer. That venture later fell through, but Summer maintains her ties with Watson and the Academy and brought several of the same talented crew to Xerxes, including accomplished stage designer Julia Noulin-Merat.

Xerxes is not unlike Cosi in that it’s concerned with amorous scrapes, the last-minute shuffle of licit and illicit attractions before marriage rings down the curtain on such capers. Xerxes appears here as a man bound for the altar with one woman (Amastre) who finds himself hankering for another (Romilda). What will a despot said to have ordered 300 lashes for the Hellespont because its turbulent waters wrecked a bridge his army needed to cross do in a situation like this?

Since Handel doesn’t give us Xerxes the emperor, Summer and company can be forgiven for giving us a Xerxes who, on the acting side, was mild enough to satisfy anyone who thinks swaggering tyrants are a bore, anyway. Krista River as Serse (Xerxes) was beautiful, poised, musically impeccable and decidedly non-imperial—so much so that her interpretation of the role raises an interesting question about gender.

Traditionally the leading male role in this work was sung by a mezzo-soprano or counter tenor, so a female Xerxes is quite permissible. That said, part of the potential drama of the piece comes from the fact that the king, thwarted here in his pursuit of his brother’s lover Romilda, could be a terrifying figure to those who didn’t fall in with his wishes. But no tremor of fear was inspired by River’s benign fatherliness, or rather motherliness. A light cross-gender humor is part of the wit of this production, but opera does have dominating characters of both sexes; let’s hope no one casts River as the Queen of Night for a while yet.

Stephanie Scarcella as Xerxes’ brother Arsamene, on the other hand, gave her role the perfect androgynous patina and was, at appropriate times, convincingly angry. Scarcella and soprano Kathryn Guthrie Demos as Romilda, in the quarrel scene just before the sudden reversal that saw them married, drew loud applause with their vocally excellent, charmingly choreographed, thoroughly believable lovers’ sparring. Another reward for the audience was the singing of Andrea Chenoweth as Romilda’s sister Atalanta, which ranged from vigorous and brilliant to dark, tender and tragic as her plan to steal Arsamene fell apart.

All the singing in this production was flawless, and every role had its memorable touch. To costume designer Kathleen Doyle go the plaudits for the glittering cans and shopping cart full of frou-frou that decorated Elviro (Darian Worrell), disguised as a flower seller to avoid the king’s notice as he carried Arsamene’s love letter to Romilda, and the hot lime tote bag the king’s injured fiancee Amastre (Desiree Maira) brought as she arrived on the scene. A stellar performance by the 12-person Arcadia Players ensemble, with Watson playing harpsichord and directing, created an effect that was sprightly and intimate at the same time. Irrepressible color, visual and vocal, made the piece a delight and a testament to Summer’s gift for banishing stodginess from an art form too often seen as fossilized and elitist.