Raspberries are full of thorns, and as such, proper protective gear should be worn during harvest.

This weekend one of my favorite spring vegetables had to end it’s short life. Back in April I planted my peas with much trepidation. I’d had some bad luck with germination and birds last year, I didn’t want to be disapointed. I put up reflective tape to scare the birds, which seemed to work. I babied the peas and was rewarded. We had lovely snow peas and sugar snaps for the last three weeks. Next year I’ll have to grow more because the whiney youngster pictured above sure loves them.

The weather has gotten hot and peas are like people from northern New Hampshire: they don’t like warm weather because they look funny in shorts.

The bed was also getting a bit weedy.

So I clipped each plant at the soil and pulled off all of the remaining peas (should keep us for a week or two). I tossed the pea greens in to the feathered locusts who danced around like I’d just declared all Americans had turned vegan. I left the roots in the ground.

Then I remembered that I am supposed to write things down of interest to gardeners and gardener wanna-bes. So I pulled up one of the root balls from a pea plant. I’ve done the classic science nerd thing of placing something familiar nearby for scale. Geologists use swiss army knives that’s because they don’t have real jobs.

In any case, I’ve used a quarter because though I’m not a geologist, I’m a post-doc, which isn’t a real job either. 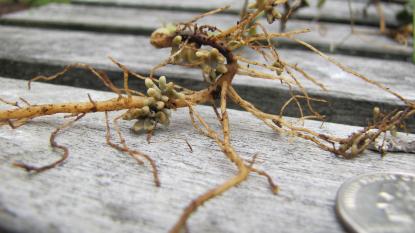 These root nodules help the plant gain nitrogen, one of the three main macronutrients plants need (N (nitrogen), P (phosphorous) and K (potassium)). Most nitrogen is part of the atmosphere. In fact most of the atmosphere is made of nitrogen, but this nitrogen (N2) is entirely unavailable to plants. Plants like nitrogen as nitrate (NO3) and ammonium (NH4). They need nitrogen to make DNA, protein and other biological molecules. Luckily for plants (and us) bacteria have filled in this gap. Bacteria with nitrogenases (an enzymes) make atmospheric nitrogen into forms available to plants. Many of these bacteria live in the soil on their own, but some have formed symbiotic relationships with plants, especially legumes.

This is critical as animals can’t do this. We often think of plants as bad sources of protein, but they actually can make all of the amino acids necessary to create protein. We can’t make a bunch of them and have to eat them. We need that nitrogen.

Legumes form little oxygen free pockets for the bacteria to live in and the bacteria set up shop. This gives the plant nitrogen, the bacteria a place to live and some sugar and enriches the soil for the rest of us. Because of this symbiosis, legumes can make significant improvements in your soil. The chart below shows the Kg/Ha added by various legumes in Australia.

Tomatoes need about 22 kg/Ha N and corn needs about 100 kg/Ha. As you can see, some of these legumes can actually provide enough for the next crop to limp along.

For the most part though, this is not where our nitrogen comes from. Since the early twentienth century we humans have relied on industrial nitrogen fixation. Natural gas is used to add hydrogen to nitrogen producing ammonia which can then be used to produce fertilizer or, not at all incidentally, explosives. The process is called the Haber-Bosch process and it won its inventors a nobel prize. Most of our calories wouldn’t get to our plates without this process: another example of our dependence on carbon based fuels.

But the bacteria do it all by their lonesome (along with millions of their brethren). That’s good enough reason to plant beans and peas for me.

If we run out of oil and natural gas, we’re going to have a very hard time making enough nitrogen to fertalize our crops (not to mention to run the tractors). What then?