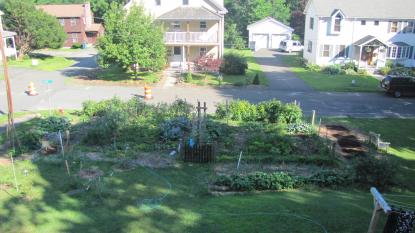 The picture above was taken in the early evening as the heat became bearable and I arose from my lethargy. As you can see the plants have grown quite a bit since the last time I posted a full garden picture. On the right you can see where the peas were — carrots are now just sprouting.

On the far side is the berry patch. This year I’ve harvested a lot of berries

This picture was taken after I had harvested all the ripest berries for the day. It is possible that the presence of the firehydrant on a corner helped spur the abundant growth I’ve had this year. The dogs really do love this spot. In the spring after the snow has melted I find lots of little half-melted doggy presents. They’re filled with lovely nitrogen for my berries. At least that’s what I tell myelf, it’s better than placing a “no pooping” sign. With two children under seven in the household, pooping is pretty much small talk. Instead of “hot enough for you,” from the old contrarian, we get “I’ll have poop for breakfast.” As the french say, “formidable.”

Each evening I head out with a metal bowl I bought when I was in Korea. It’s the perfect size for picking an afternoon’s berry harvest.

It’s around a quart of berries, but that’s not why I bring it up. This bowl is sold as a two-ho bowl. My mother tells me that a ho is a measure of rice (volumetric I assume). This bowl holds two of those. Presumably a one ho bowl is about a serving of rice.

For perspective I recruited a cute model to stand beside it. 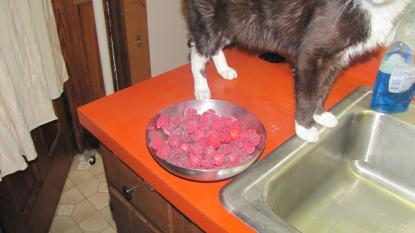 We used to have a rule that no felines, model or no, were allowed to stand on the counter. This one is always thirsty because his “kidneys are failing,” or some such lame excuse. We’re spoiling him rotten and he loves drinking from the faucet.

I love these berries, and though I don’t go through the full bowl every night I eat plenty.

I planted them for our boarders. When they were wee they loved a book about berries: 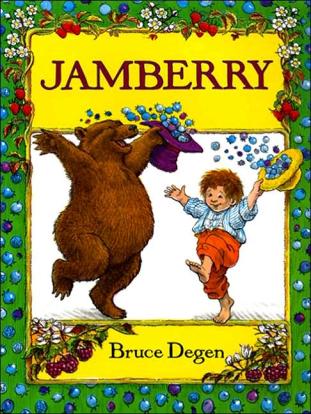 They do still love berries, but they’ve become fussy because of the abundance. They will only eat golden raspberries (note none are pictured above, they’ve all been eaten). They are sweeter, so they won’t touch the “sour” red and purple raspberries. My argument that the colored berries have more complex undertones and an earthy nose hold little water.

It seems to me that once again the un-fettered wants of these children end up akin to the way Republicans act. We want the debt problem solved but only if you hurt poor people and give to the rich. They’ll only eat golden berries. If I’d never planted golden berries this wouldn’t be a problem, similarly if we hadn’t cut taxes for millionaires, we wouldn’t have this problem and we’d all be happily eating red berries.