In the distant past I took a class in small fruit production at the Looniveristy. The boss thought that was the best title for a class that she’d ever heard. I was and am very interested in anything to do with small fruits. Some of my favorite fruits are small and some of my favorite small things are fruits.

The instructors took us on field trips for our “labs.” We saw a lot of strawberry fields that got drenched in methyl-bromide to kill off everything in the soil. We also toured lots of raspberry and blueberry fields. The blueberry farmers all had to deal with birds and they used every conceavable method: traps, loud noises, decoys, and of course netting. By far my favorite visit was to Birdhaven farm in Southampton. Apparently the year they opened they didn’t defend against the birds and they didn’t get much of a crop — hence the name. That was back in the eighties when day glow parachute pants were acceptable fashion. I would have thought that would be enough to keep birds away. Oddly they didn’t even push down the birthrate.

Since my first visit, we’ve made it back nearly every year. Last year was a rough year for blueberries because of some late frosts. The owner, John told me this happens about every six years and he just considers it part of life. This year they’ve got a bumper crop.

We brought the entire Rounds Army. At $3.50 a pound, you can get a lot of blueberries for way less than they charge at the market. Luckily they neglected to weigh us on the way in.

In the image below the anti-bird fortifications are apparent. Each of those bushes is bursting with berries. 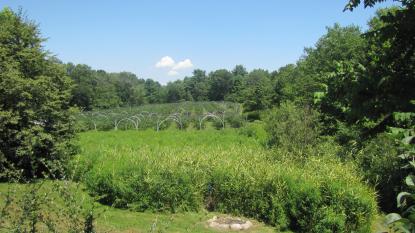 We set to work. Note the gallon milk containers slung around the boss. I had a matching pair. This allows for easy collecting and is an excellent innovation. 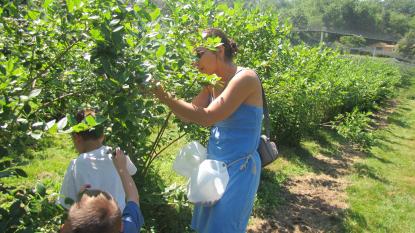 Elliot neglected his bucket at first, opting for the direct approach: 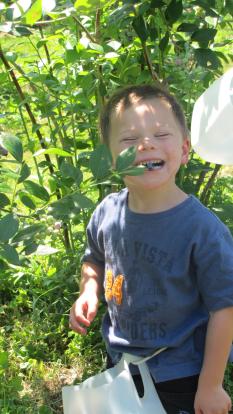 They have several varieties of berries that mature at different times so they can pick into August and sometimes later. The extra gets made into awesome pies that can be purchased on site. The older boy began asking about pie as soon as we pulled into the parking lot. 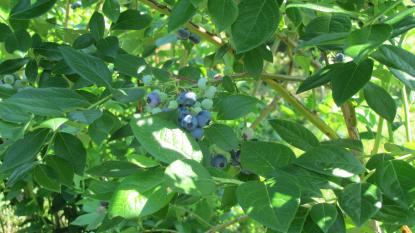 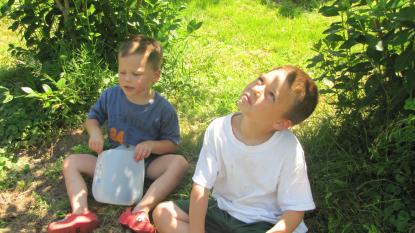 Even surrounded by blueberries the attention span of the under seven set is somewhat limited. Note that the younger boarder’s bucket isn’t so full. He variously described it as containing nine to sixteen berries. Mostly it held roughly ten and was in a steady state condition with even numbers going in and coming out. 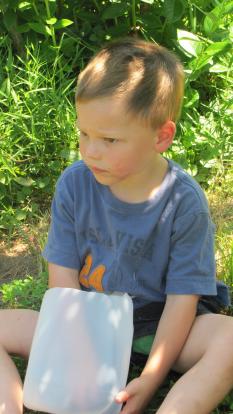 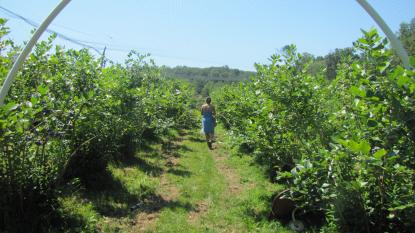 Once the whine to berry ratio tipped to the unpleasant we headed in for weighing. 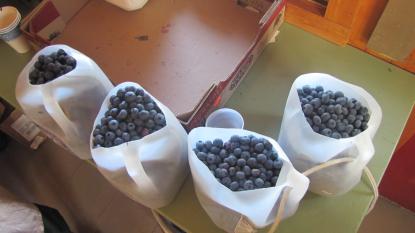 Not a bad haul — four gallons. Over 16 pound of berries! I froze them on cookie sheets and then packed them in quart size freezer bags. I left a bunch for fresh eating as well.

You may have noticed at some point that I have blueberry bushes in my yard. Ten bushes all under three years old. I remove the flowers from the young ones so they’ll focus on vegetative growth. The older ones have thus far always been denuded by birds and an overanxious three year old who figures that unripe berries are almost as good as ripe ones.

I promise myself that this year I will put in netting so that I can actually eat yard berries next year.