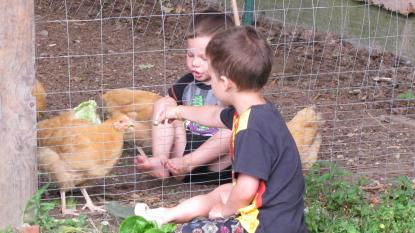 Keeping chickens has been remarkably trouble free thus far. Before getting them I read Storey’s guide to raising chickens. This is the rough equivalent of a hypochondriac reading the Physicians Desk Reference. I was prepared for my chickens to suffer from impacted crops and prolapsed oviducts and all manner of viruses. So far the main issue has been the heat. For some reason the site of six chickens sitting in the dirt panting makes me feel immensely guilty. But trouble is coming. 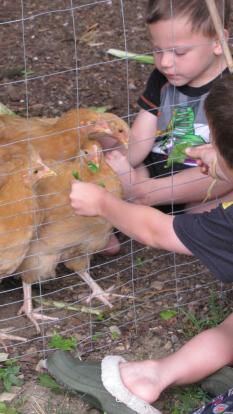 One thing I didn’t expect was the bond between the kids and the birds. Chickens aren’t much smarter than a sack of hammers, though they are at least twice as useful, yet the boarders find them interesting. In the morning they often rush out for chicken time. Sometimes I give the boys a head of bolted lettuce. They’ll sit there and rip off pieces of lettuce and hand feed them. They’ll do this for twenty minutes at a stretch — in their pajamas. 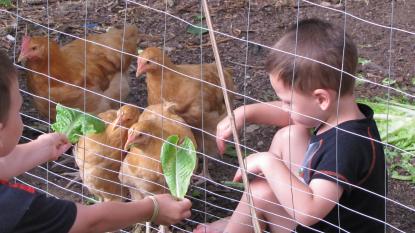 The youngest will even try to hug the chickens. Ultimately not such a great idea because chickens are pretty sharp (beaks, claws). 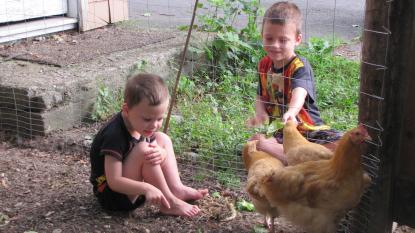 But there’s a sadness coming to birdville. Moonpie, as suspected, has shown his true colors: he has begun crowing. At least he’s trying to crow, he sounds like exactly what he is: a teenager trying to fill a man’s shoes, or feet in this case.

So it looks like it’s time for me to find someone who wants a rooster. I certainly was prepared for this when I got chickens. I’ve talked about it with the kids, and they know it’s going to happen, but I’m a bit worried. Luckily, Moonpie is not helping his case. He’s turned into an agressive little, well, cock.