We had a rough bit of heat for a few weeks followed by some good rain and a bit of a cool down. This has been ideal for most of the plant life in my yard. As I mentioned in my last post, I had to chase down my family last week. This was made more difficult as they were driving and I was on a bicycle. Eventually I caught them and we all came back. The garden had gotten a lot bigger in just a few days.

Plant growth is not linear, it is exponential (Please ignore the y-axis label “pay” it has nothing to do with anything. Who besides corporate executives can expect exponential pay increases?). 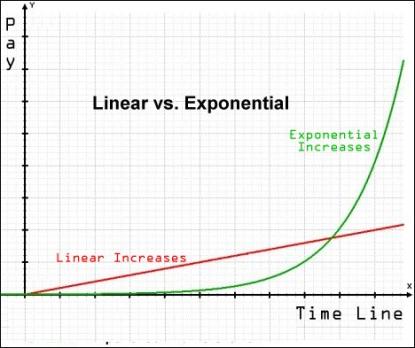 If plants were to grow in a linear manner, the difference between day 1 and day 2 (say of a centimeter) would continue and plants wouldn’t get very big (the red line). At the end of a week they’d be 7 cm, two weeks 14cm ad nauseum. Becayse they grow exponentially, the increments are small in the beginning and you barely notice a change, then growth takes off. A squash seedling with three leaves looks like it will be that way forever, then a week later you’ve got a huge plant taking up 20 square feet of your garden.

I’m pretty careful to give everything enough room (barely), but the spaces between beds begin to suffer around this time of year. Here’s an image of the canteloupe (on the left) with beans and brussels in the backgrounds and sweet potatoes in the middle (inside the fence you see the tomatoes). The plants have made themsleves into a dense living mulch on top of the leaf mulch I put down. This is good as it means little weeding, it’s bad because it’s hard to get in there and control adventitious roots in the sweet potatoes and to check on the melons. It also looks a bit messy. Neighbors walk their poop makers by hanging their heads in shame “go ahead and poop, he doesn’t care.” They say to their pups.

In this next picture the winter squash is swamping the broccoli on the left. Really you can’t see anything, it’s just a sea of green. I had to go in there and beat back the squash to give the broccoli a fighting chance. I’ve gotten loads of broccoli, most I’ve frozen, but now I can get delicious side shoots for the rest of the season if I stay on top of it.

A problem of plenty, really the best kind of problem.

The “tough gardening” of my title comes from the fact that I now have to contend with the part of that exponential growth where the line is going straight up. The weeds are growing exponentially and the plants are beginning to fruit in the same way.

This is the part of the year that gardens get abandoned. There’s just so much there we can’t see our way through. Weeds everywhere and plants have become a tangle.

But now is also when you start to get moments like spring.

I’m starting to get post harvest blank spaces. Below is a spot, marked by a pitchfork, that recently held potatoes.

This next picture shows two harvested spots. The one on the left is where the garlic came out. On the right is where the peas were. I’ve now planted carrots, beans, ruttabagas, beets, and kale there.

It is tough to get back in there and think spring thoughts when the sun is baking the lawn, but that’s the thing to do. In the fall you can get many of the great spring vegetables again — spinach and lettule are my favorites of course. I’m not sure peas will make it, but I’ve had luck with cabbage before.

Around the end of July I start succession plantings of cool weather crops. With the exception of carrots, I don’t plant a lot of it of any one plant, but I keep going until a bit into September. The last spinach and lettuce just barely germinates, but with a bit of mulch, it will make it until spring.