A forest needs a fish like a man needs a bicycle

One of my favorite radio programs is “living on earth.” The host and journalists aren’t confrontationally leftist like Amy Goodman and her colleagues at Democracy Now! (not that there’s anything wrong with that): the “loe” people are a mellower bunch. They begin with the assumption that protecting the environment is probably in our best long term interest. They interview scientists and investigate environmental problems and don’t feel constrained by having to produce a loony-tunes global warming denier to balance things out.

This weekend I heard a “recycled” broadcase of an interview with David Suzuki. Unfortunately, he’s Canadian. Luckily they had an excellent translator who even pretended to sound like an old scientist of Japanese heritage. This is really professionally produced radio.

Suzuki earned his keep studying fruit-fly genetics, at some sort of Canadian equivalent of a University in British-Columbia (which is it?). In the nineties he started doing television specials and has become quite famous apparently. I mention all this merely to present his bona fides.

He told a story about salmon and their impact on the temperate forests of the northwestern Americas. I found it preposterous, so did some digging and found several independent sources that confirmed his facts (1,2). 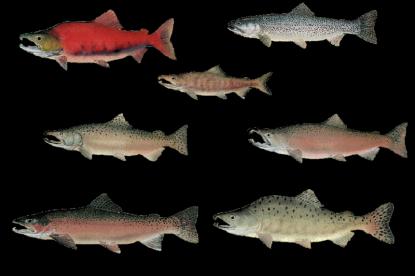 Salmon are an anadromous species; essentially they’re one time commuters. Born inland, they commute to the ocean to make a living (eat lots), then head back home to spawn. Heading home turns out to be quite a scene as they all do it at once. 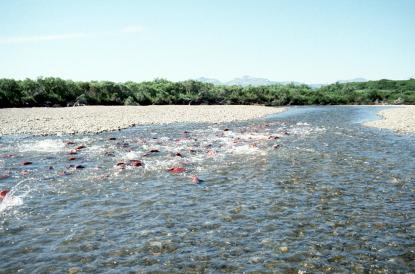 Once up their creek, they do their naughty business back home, then die. There are no “leftover salmon.” 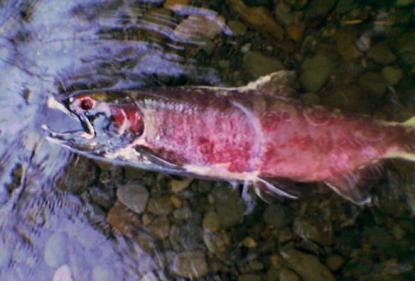 Enormous numbers of fish used to head up stream every year to spawn. Not surprisingly this did not escape the notice of the ursine inhabitants of the woods — or any of the other hungry woods denizens. Several dozen species depend largely on salmon for a huge part of their yearly caloric intake. Biologists know this because it is possible to determine where the nitrogen in these animals came from. Much of it comes from the ocean.

Nitrogen as I’ve said before limits the growth of plants as well as animals. Everyone needs it to make proteins. So picture this scenario:

A hungry bear grabs a salmon and walks inland a bit. He eats the tastiest bits (eyeballs? brains? I shudder to think). The rest he drops on the forest floor and heads back for more. Ravens and slinky nasty things feed on the carcass. Suzuki describes how flies lay eggs on said carcass. When the eggs hatch, the larva eat some fish then head under ground. After they pupate they emerge just as migrating birds are heading north to the arctic for the summer. Without the fish, the birds don’t have a place to stop and eat flies.

The carcasses and the animal poop (after eating the fish) also provide significant amounts of nitrogen for the soil and trees. The trees in turn provide shade to keep the streams cool and they prevent run-off so the streams stay clear.

The above pile of spaghetti expresses some of the nutrient cycles that the salmon contribute to. Without the salmon this entire cycle doesn’t work right. The salmon acts as a nutrient conduit from the ocean to the land and back again.

So who do you think might mess this system up? According to some, sea lions ar e the problem. I guess I’m of the opinion that there are just too many damned humans. I have some suggestions on who I think might could move to Mars. I hear the weather is lovely and there might even be water.