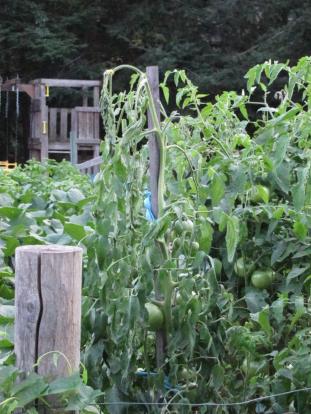 It had probably been suffering for a while because this sort of thing doesn’t happen overnight usually, but I hadn’t noticed and I had looked at this poor dear just yesterday. Where did I go wrong? I wasn’t wilting, but I was suffering too. 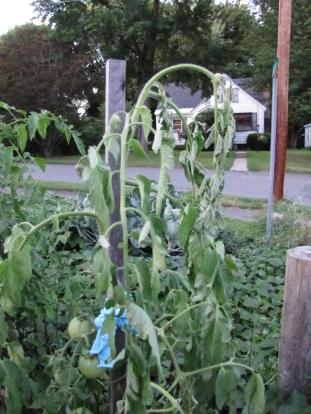 Just look at that! Healthy green new leaves wilting! We’ve had plenty of rain, almost, but not quite too much. So it’s not the rot or drought. Besides, all my other tomatoes look fine. 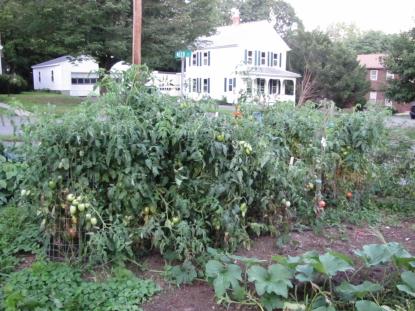 Sure, OK, they’ve got a little septoria. Maybe a bit of early blight. But they always get a little of these and still set and ripen lots of fruit. This plant had suddenly wilted, like, well like a squash plant infected by a borer. A little poking around suggested that sometimes voles can cause the problem. So I lifted the plant; after all it’s dead or dying and if it’s diseased I sure don’t want to see any others get sick. 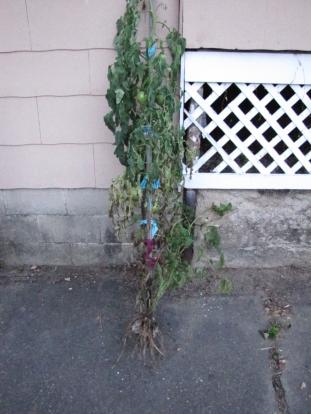 That root ball is kind of small, but I didn’t see any chewing and the ground around the stem seemed solid. Usually when I’ve had voles/moles the ground has tunnels. But wait what’s this? 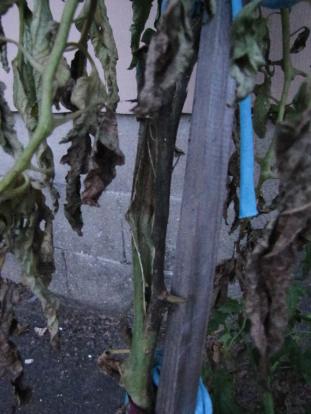 The stem is cracked. When I ripped it back apically and basally (top and bottom). Someone’s been eating my stem! Could I have a stalk borer? Almost undoubtedly. Then I found this: 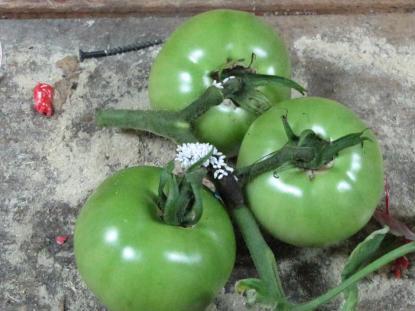 And a close up shot:

That’s a caterpillar with parasitic wasp eggs covering it. I got very excited. A poor neighbor walking his pooch had to listen to my excitement (one of my favorite pooches no less who was disappointed that I paid no attention to him; at least I’d like to think so). I was really satisfied to see that the little monster had been punished.

But wait, that looks like Cotesia congregatus, a braconid wasp. And that looks like a little horn pointing off one end (you can’t see it in the photo, but it’s there). What I’d found was this: 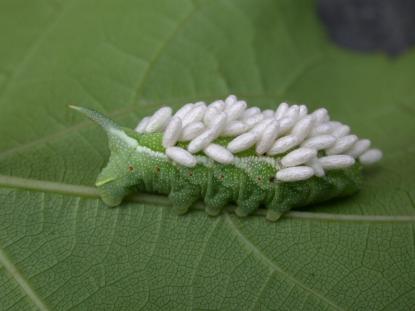 True it was all desiccated and shriveled after the wasps had their way, but it’s Manduca quinquemaculata, a tomato hornworm. The horn comes off the butt not the mouth in case you were wondering. This is not the beast that had damaged the stem. That little monster is still out there. I checked a bunch of other stems and they appeared to be intact, but he’s out there. I can just imagine him now, out there in the dark, eating my tomato stems and pooping frass. Bastard. Really he’s a bastard, his parents weren’t married.