This summer on my way to work, I found something just for me in a box of cast-off books on a sidewalk in downtown Northampton: a biography of Tolstoy by Henri Troyat published in 1967 and translated from the original French by Nancy Amphoux. A clipping with a photo of Troyat and his bio was inside the book—probably this was taken from the original dust jacket. Troyat was a Russian-born French novelist and biographer. He died in 2007.

I found something even cooler inside: a yellowed and fragile New York Times Book Review clipping, from April 2, 1978: a list of the books that Tolstoy was most impressed by, organized by the age at which he read them. Gold for this wannabe Tolstoy scholar. I have reproduced it here. Isn’t it tempting to create a list like this for oneself?

The following list was provided by Leo Tolstoy to a Petersburg publisher who had asked Tolstoy and many other famous people for the books that had most influenced them. It was Tolstoy’s idea to divide the list into phases of his life. The list was attached to a letter written from Yasnaya Polyana on Oct. 25, 1891 [he was 63 years old] and appears in “Tolstoy’s Letters,” edited by R. F. Christian, which will be published by Scribner’s next month.

WORKS WHICH MADE AN IMPRESSION

Childhood to the age of 14 or so

The story of Joseph from the Bible Enormous

Tales from The Thousand and One Nights: the 40 Thieves, Prince Qam-al-Zaman Great

Viy [a story by Gogol] Enormous

Lermontov’s A Hero for our Time, Taman V. great

The Odyssey and The Iliad (read in Russian) Great

The Odyssey and The Iliad (in Greek) V. great

All the Gospels in Greek Enormous

Feuerback (I forget the title; work on Christianity) [“The Essence of Christianity”] Great

On the Buddha. Well-known Frenchman (I forget) [“Lalita Vistara”] Enormous 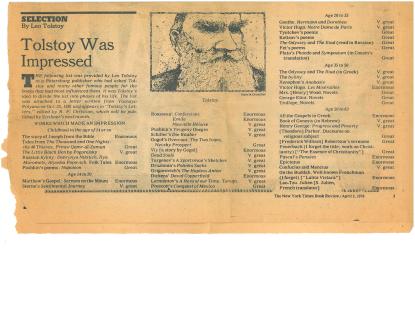