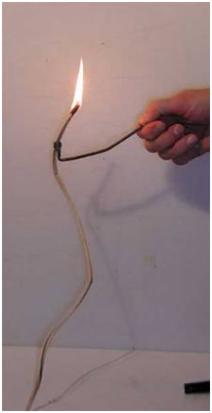 Despite certain advances in medieval historiography, there is still a general assumption that the middle ages were a period of despair, a time when the innovations of the Roman Empire crumbled, a commitment to knowledge and inquiry ceased, and of a dark atmosphere and general malaise. Modern studies of the period, such as Ian Mortimer’s Time Traveller’s Guide to Medieval England, however, have shown the medieval period to be one of optimism and advancement, where, for instance, the reader finds out that castles were brilliantly colored structures that have simply lost their pigments over time.

Another particularly surprising aspect of the medieval period was that it was a well-lit period. In the 14th century effective lighting was readily available to both the landed elite and the lowly villein.

For the peasantry, lighting was abundant, easily accessed, and free. This frugal method of lighting was the rush: a natural reed that grew, and continues to grow, wild in most areas of Britain. The “rush light” was made by first harvesting wild rushes, then drying them out and, finally, stripping them of their skin. This process would reveal the firm pith beneath that served as a rudimentary wick. The pith was soaked in rendered animal fat—another item readily available to the medieval villein, as animal husbandry was commonplace amongst lower classes. After the fat quickly dried, the pith was an ignitable source of light. A peasant’s medieval home could contain as many rush lights as needed due to their natural abundance in the British ecosystem, and the relative ease of acquiring animal fats.

Animal fat played an important role in medieval lighting—not only was it a necessary ingredient for igniting the medieval rush light, but, as tallow, was also one of the most widely used ingredients in creating medieval candles. Rendering the suet of cows, sheep, or goats—animals all very common to the British landscape—produced tallow. Bits of the fat were boiled down into a liquid and, when cooled, would harden into a creamy white, solid substance. Peasants formed these candles through a process of “dipping”: taking a wick of wool, cotton or silk and dipping it into the molten tallow. The wick was removed, which allowed for a thin film of tallow to harden, and was then dipped back into the rendered fat repeatedly until a sizeable tallow candle was formed. 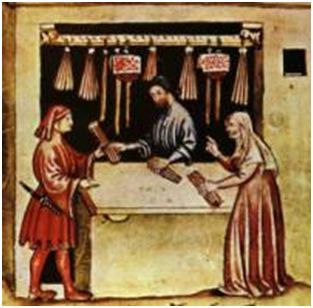 Tallow candles were more difficult to produce in large quantities due to the amount of fat required in the process. A villein only had so many animals to slaughter, therefore the rush light was a much more economical option when lighting an entire household. Not only more costly to produce in terms of slaughtered livestock, the process of making tallow candles, and the subsequent light they produced, gave off a rather unpleasant stench of fat. Furthermore, there was a significant amount of smoke and soot produced that would turn nearby objects, such as house walls and draperies, black. All of these factors aside, the tallow candle was an incredibly useful lighting instrument in a world devoid of electricity and kerosene. The tallow candle burned longer and brighter than the rush light, and its ingredients were comprised of items that villeins did have access to, although due to the quantity of tallow required to make the candles, its use was more widespread among those slightly better off, such as the yeoman.

Moving up in 14th century society, one still finds the candle adorning the tables and shelves of the upper classes. These candles, however, were not the odorous and smoky tallow versions in the homes of yeoman and peasants. Nobles had access to beeswax: a cleaner, more efficient and more expensive material. Beeswax was the brightest burning material of the middle ages; it lasted longer than tallow and rush lights and, most importantly in lavish homes, did not ruin its surroundings.

Beeswax candles were even more popular amongst the clergy—beeswax was the only form of lighting allowed in a medieval church. While the clergy certainly did not want images of Christ the saviour turned a sooty black by the burning flesh of beasts, and beeswax candles had the appeal of the brightest light available to equate with certain holiness, there was an even more novel reason behind their use. Amazingly, the clergy was aware of the fact that beeswax is a virgin material as only worker bees produce wax; and worker bees do not mate with the queen. Because of this reason, medieval churches kept bees in their gardens.

Though the beeswax candle was quite an expensive luxury, exclusive to the church and some nobility, lighting was not a rarity to the majority of medieval Britain. Although the different methods had certain differences in quality and efficiency, creating medieval lighting was a simple process and, above all, readily available to the general population with ingredients that were commonplace.

A Medieval candle vendor or “chandler.” Image from the Tacuinum Sanitatis