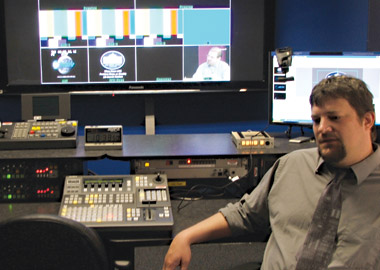 Northampton Community Television executive director P. Al Williams has reason to feel good about his most recent hire. Jeromie Whalen, who paid his dues as an NCTV intern before getting the thumbs up for full-time employment, helped bring the station some national accolades over the summer.

The Hometown Award is an annual honor from the Alliance for Community Media—a roughly 800-member organization made up of community TV stations from across the U.S.—and was taken home this year by Whalen’s winning documentary, Purgatory: A Historical Analysis of the Belchertown State Schools. The award not only garnered praise for Williams (and gave him an excuse to visit the Southwest), but also gives additional exposure to the documentary, the issues addressed in it and the Pioneer Valley in general.

“I joined the ACM National Board in May [he’s now Vice Chair], and I went out to Arizona both as a board member and to get the award. I actually shot video of myself accepting Jeromie’s award,” Williams chuckles, “so he could experience it vicariously.”

Whalen sits at his newly acquired desk as his boss shows me around the studios, a multi-room suite tucked away in the rear of Northampton High School that seems much bigger inside than you would suspect from its unremarkable exterior.

“At NCTV we do a lot of teaching,” Williams tells me. “We also do a lot of consulting and hand-holding because TV’s hard to produce—we’re very hands-on and available to people who utilize us, so when people have projects and run into problems, we can say, ‘Well, here’s what you’re going to encounter.’ Some people are more challenged by the technology and some people aren’t so challenged.”

There is a fair amount of technology in the place, from the big room with live-feed cameras and lights to the main control room that houses a wide range of equipment (standard-def stuff that was donated by an area NBC associate after the 2004 Olympic Games in Athens) to a couple of modest editing suites with computers and line mixers. There are also a green screen, several HD digital field cameras, and mounts for cars, bikes and human heads as well as waterproof housings for underwater shots. Williams notes that the main control room is being dedicated to Teri Morris, a longtime former NCTV presence and drummer for the local rock band Tizzy, who passed away prematurely at age 41 from cancer. Morris oversaw the station at its old location on Bradford Street and was involved on some level with many citizens’ creative projects in the 1990s and early 2000s.

“She was on the C.A.B. (Cable Advisory Board) in Northampton,” Williams said, “and had actually just gotten her law degree before she passed away. She was technically a Comcast employee back when NCTV was run by Comcast, and was actually one of the people who were instrumental in making this [new] place happen—she brought a lot of knowledge to the negotiations.”

Morris’ savvy at squeezing the greatest advantage out of existing law has become increasingly apparent after the fact to latter-day community media champions like Williams, who have begun to observe how she cannily utilized municipal rights built into the Federal Telecommunications Act of 1996. Buried in the fine print of the 15-year-old law is a clause allowing communities to fund facilities such as NCTV’s through negotiations with the cable companies who do business in their cities or towns. Williams explains how the station’s primary funding is obtained:

“We’re [currently] not a government entity and we’re not a cable company—we’re a completely independent nonprofit. We’re really a subcontractor; we run the community media center for the city, and the funding comes as a result of federal law. The city can negotiate with whoever the cable provider is—in Northampton there’s only one cable provider [Comcast], as is the case in pretty much all of Western Mass. In eastern Mass. there are more providers.

This formula for successful funding doesn’t necessarily work well in sparsely populated towns; in low-density communities like Plainfield, there just may not be enough cable revenue for a town to take a bite out of that amounts to meaningful capital. But, Williams tells me—perhaps because of a dearth of knowledgeable advocates like himself or Morris—many more densely populated cities and towns are simply unaware of their rights under these provisions and may wind up essentially bullied out of them as a result of their ignorance.

“I live in Holyoke,” Williams says, “and they have nothing like this—and they could really use it. A lot of municipalities only negotiate these contracts once every 10 years, and they don’t even have anyone there who knows anything about it enough to say, ‘Oh, we could ask for this,’ or ‘This is what we should ask for,’ or ‘This is how much other people get.’

“Hatfield is just negotiating now,” he says. “Their expectations are, obviously, not what you can have here [in Northampton], just because there aren’t as many people there. But conversely, in Holyoke and Springfield, you would think that there would be a much larger facility—yet they don’t have those. I’m actually on the Holyoke cable TV commission now, and we’re starting to renegotiate.”

Much of the teaching done at the station comes in the form of internships that are directly arranged through the high school, where students can sign up to learn production and editing techniques. There are also a lot of people from the community who sign up for classes, a process that seems to work pretty much on a sliding scale.

“We have a yearly recommended donation, and that’s completely waivable, so we tell people, ‘Hey, if you’re strapped for cash, pay less or just ask us to waive it,'” Williams says. “We’re not asking any questions or doing any sort of investigation; it’s not the fundraiser for us. We’re not making money off of the fees.”

The digital video editing program Final Cut Pro is what’s primarily taught in classes, but NCTV is slowly expanding its mandate to include programs like Photoshop and Flash. Video editing is, necessarily, taught on a one-on-one basis, because the station only has two edit suites. There are also things students can learn that move a little faster than the often snail-paced activity of editing, and some people seem to fall more naturally into this faster-paced environment.

“We also teach people to direct live television from a control room,” Williams continues as we enter the main “live” room. “One of our interns from last spring [Emily Crescitelli] just started at Marist College, where they run a campus television show—she’s going into television production. She talked with her advisor, and, based on what she learned with us—and freshman aren’t even usually allowed into this program—I think she’s going to be directing the program, and maybe running it next year.” Take heed, NHS seniors; a semester at NCTV could put you on the fast track to Hollywood.

NCTV covers a lot of typical community issues—mayoral debates, local weather when it gets out of hand, and the annual Transperformance music benefit at Look Park. Some would-be producers create local news programs or talk shows, or endeavor to stitch together ambitious documentaries digitally, bit by bit. Some who’ve been bitten hard by the bug even strive to produce shows that air regularly.

“One of our producers, Henry White, does a show called Spotlighting Paradise,” Williams tells me, “which features a variety of guests—anyone he finds interesting, essentially. And our internship program did NPS News in here, which is a regular talk show.”

I mention that one of my 17 simmering, back-burner creative ideas is to produce a show that reviews action movies, and he recalls a similar “review” show from the annals of NCTV’s past with a bit of a chuckle.

“Teri used to produce a show for the old NCTV where—Bill Dwight was on it, with Dana [Gentes] from Pleasant Street Video—where they would review films, and at times they would review them without seeing them first, just from the previews, you know. They were like, ‘Ah, we’ve seen this film already,’ and they’d just review it anyway.”

The subject matter of potential NCTV shows remains similarly open to just about every concept, he says. “Anyone can pitch anything—within reason—to produce.”

Looking forward, Williams wants to engage the community in a number of ways, not just through television production.

“We’ll be teaching all multimedia production, whether that means teaching people Photoshop, teaching them how to blog, how to build a website, how to do audio recording,” he says. “We’d like to start a citizen journalism program, be creating news on the hyper-local level; really having this place be just more of a community center in general.”

As tuitions for communications schools like Emerson College or the Connecticut School of Broadcasting continue to rise, well-equipped learning facilities like NCTV become an ever more appealing alternative for those seeking a vocational leg up in a media career. For aspiring young producers on shoestring budgets, the station is a resource that Northampton is lucky to have. For other communities that are arguably starving for something as inspiring, productive and educational as NCTV has put together, the hope remains that strong negotiators like Morris and Williams will step up and help them to get what they’re entitled to.