Which Is Worse: Gore-Tex Trail or Donald Trump State Park?

I recently came across a blog post about the Gore-Tex company sponsoring a long distance trail in Scotland. And how trail sponsorship is one way conservation groups and outdoor recreation organizations can raise the needed funds to protect and create access to the proverbially great outdoors.

It is counterintuitive, perhaps, that leaving something alone, the intentional act of not acting, would cost so much money. That in our 8-days-a-week society of encroaching overdevelopment, non-development would prove so expensive, too. (Even if providing access to said wild, “undeveloped,” open space often necessitates trails and lodges and so forth.)

But it appears this is the case. And that is unsettling.

“Now I recognize funding is always a challenge for trail developers and trail maintenance,” writes Matt Heid in his post for the Appalachian Mountain Club’s Equipped blog. “But I also head into the backcountry to escape from the capitalist trappings of society and revel in the purity of the natural experience. So the thought of having a brand name pushed on me at every trail junction is somewhat galling.”

Amen to that. You can’t get away from it all if you take it all with you. And ubiquitous product placement is a big part of that equation.

But I came across a sign a few weeks ago, en route to New York City that, in relief, made the proposed “Gore-Tex Trail” seem not nearly as nauseating. It was a sign for the Donald J. Trump State Park.

At first glance, I thought it was a joke. 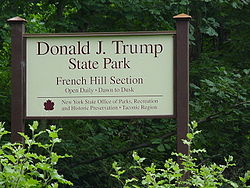 Now I know I would renege, and hike on the Gore-Tex Trail if its route brought me to a geographical location that I really wanted to get to. But there’s no way I would set (boot) sole in a state park named after, and created by money donated by The Donald. No way at all. Nothing would ruin the summit of a vista view, or the tasty Smores of a camp fire more than thinking, even on the most noninvasive, subconscious level, about Donald Trump.

Of course, since the park has been temporarily, indefinitely, closed due to a lack of park funds, that venture has been trumped, as it were.

Still, the sign of the park remains. And heed it I will.